Today, we’re wrapping our “Get to Know a Swing District” series with a look at Texas’s Thirty-second Congressional District. 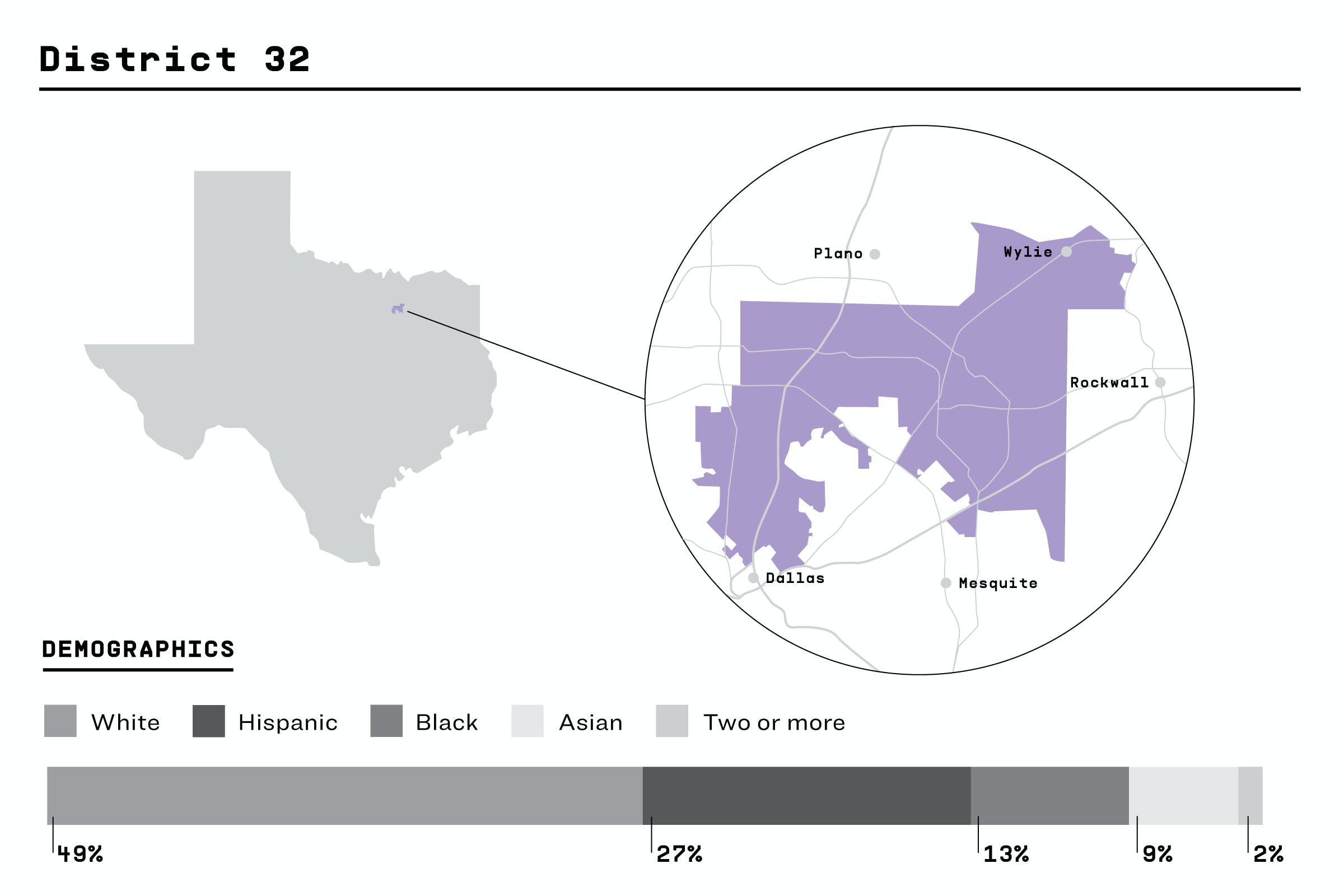 Created in 2003’s redistricting session, TX-32 was represented by just one member of Congress until 2018: Republican Pete Sessions. He won by double-digit margins in eight straight elections through 2016, a year when Democrats didn’t even field a challenger. Two years ago, however, the party ran a slate of candidates in previously safe GOP seats across the state, and former Baylor Bears and Tennessee Titans linebacker Colin Allred emerged from an intense, seven-candidate Democratic primary to take on Sessions in the North Dallas suburbs. That November, he defeated the incumbent by a shocking 6.5-point margin. His victory, along with that of Lizzie Fletcher in TX-7, on the west side of Houston, proved that not only could Democrats compete in some Texas suburbs, they could win in them.

There’s a fun mnemonic device to keep track of TX-32 among all of the state’s swing districts. The district includes a portion of Collin County and is represented by Colin Allred, who is being challenged by Genevieve Collins. So it’s Collin/Colin/Collins all the way down!

A playful Scottish terrier who’s been frolicking in a brush pile and has a lot of burrs stuck to its legs.

The district comprises several wealthy North Dallas communities. Its western side encompasses the neighborhoods of Preston Hollow, Highland Park, and University Park. Its middle includes the suburbs of Richardson and Garland. And its eastern edge, near the dog’s snout, picks up a small chunk of Collin County and the mid-sized suburb of Wylie. Some high-profile political and sports figures own homes in the Thirty-second, including George W. Bush, Mark Cuban, Jordan Spieth, Roger Staubach, and Lee Trevino. 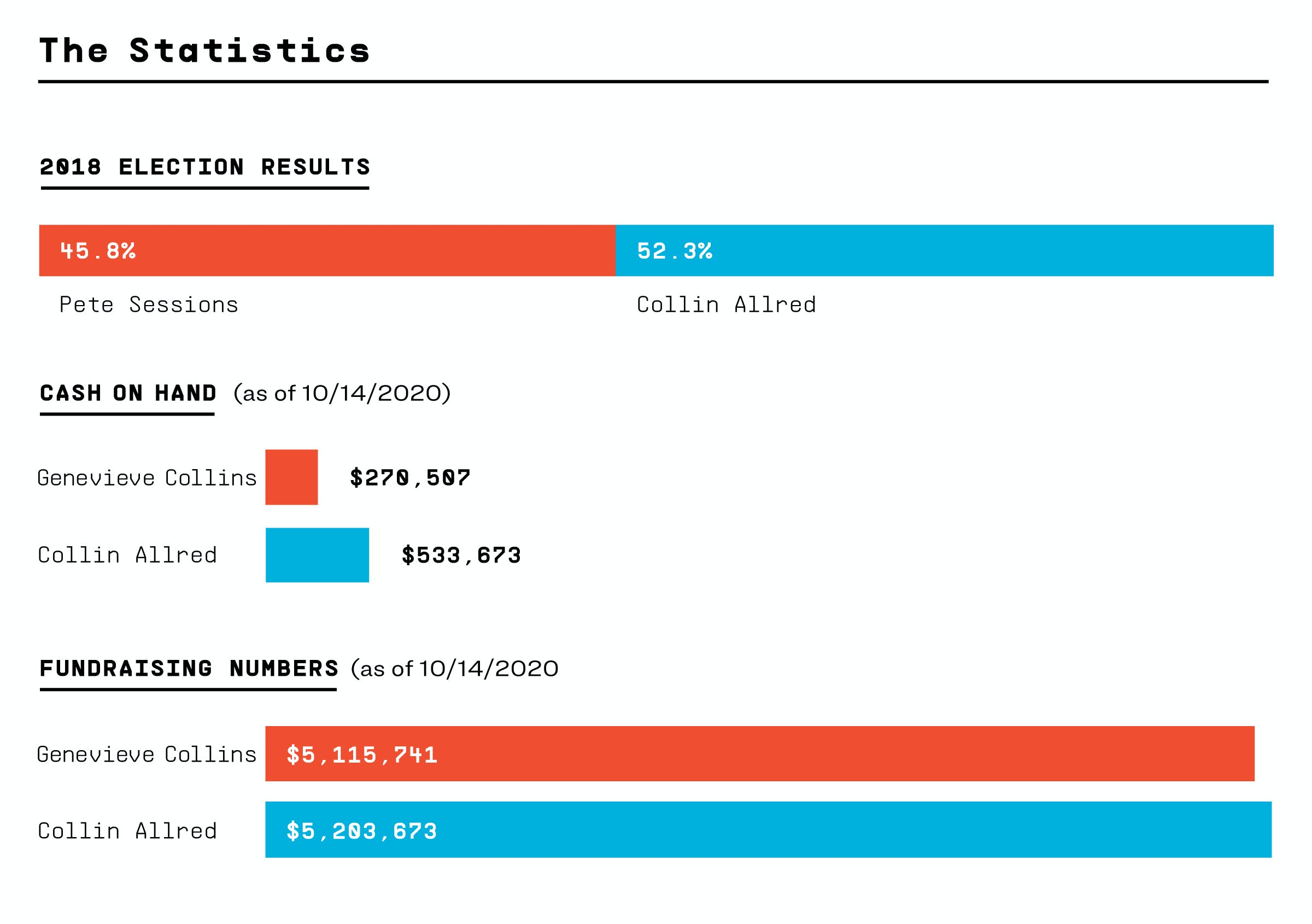 Before running for Congress, Allred had enjoyed multiple careers. His time in the NFL wasn’t particularly distinguished: he played in 32 games over four seasons and retired with 38 tackles. (To be sure, that’s 38 more than most members of Congress have recorded, though Ohio representative Anthony Gonzalez can boast seven career touchdowns as a wide receiver for the Indianapolis Colts.) After retiring, Allred graduated from the University of California Berkeley School of Law, worked for Julián Castro during his time as Secretary of Housing and Urban Development in the Obama administration, and then spent a few years as a voting rights attorney in Dallas.

Allred is a mainstream Democrat, who is both a member of the moderate New Democrat Coalition and the Congressional Black Caucus. He favors a public option for health care, a path to citizenship for Dreamers—undocumented immigrants brought to the U.S. as children—and a ban on the sale of semiautomatic weapons. He opposes a fracking ban, while supporting federal investment in renewable energy.

Allred’s a prodigious fund-raiser, having brought in more than $5.2 million as of mid-October. He’d spent all but $534,000 of it by that point.

A political newcomer, Collins has spent her career in the private sector and currently serves as a vice president at the e-learning company Istation (where her father serves as CEO). Like Allred, she’s a millennial and a former college athlete, competing on the University of Tennessee-Knoxville’s rowing team before graduating in 2008. She attended business school at Southern Methodist University. In 2017 she presented an education policy proposal to Mike Pence, which she describes as her proudest career accomplishment. 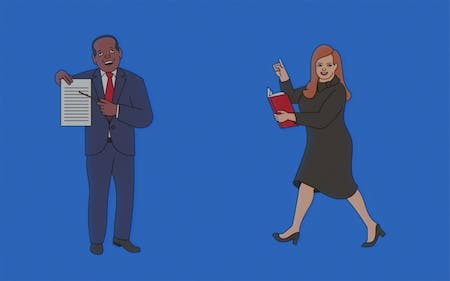 Lizzie Fletcher’s 2018 Victory in TX-7 Proved Democrats Could Win in the Texas Suburbs. Can the GOP Take the Seat Back?

Collins’s campaign centers her education platform, which focuses on wider adoption of technology in public schools and universities. On health care, her website’s first policy plank is to “Stop Socialized Medicine!!!” She argues that the Affordable Care Act “has raised the cost of care and eliminated access to doctors of our choosing,” but believes it must be replaced, not just repealed. Her solution calls for expanded tele-health access and fewer limits on Health Savings Accounts.

On immigration she supports both President Trump’s border wall and allowing Dreamers to remain in the country, while stopping short of granting them a path to citizenship. She’s also run on preserving tax credits for the oil industry while pursuing investment in renewables, and enforcing existing gun laws rather than implementing new ones.

Collins is a skilled fund-raiser, bringing in just more than $5.1 million through mid-October. Like Allred, she’s spent most of it, and she had just $271,000 in the bank at the end of September.

Wealthy Dallas-area voters tend to favor the GOP: the Cook Political Report labels the district as leaning five points more Republican than the rest of the country. Even as Allred won in 2018, Governor Greg Abbott carried the Thirty-second by five points, suggesting that the right challenger could beat a Democrat there. Collins’s youth, private sector background, and fund-raising prowess could make her such a challenger, especially if the Dallas suburbs swing a bit more to the right than they did in 2018.

Allred is a popular incumbent, and there’s no particular reason to think that the Dallas suburbs will vote 6.5 points more Republican in 2020 than they did two years ago. The district’s trends don’t bode well for the GOP: Hillary Clinton beat Trump in TX-32 by 2 points in 2016, while Beto O’Rourke won the district by 10 points over Ted Cruz in 2018. Abbott’s 5-point margin in the district came in a year when he won the state by 13.

No one has released polling in the district, but the experts at FiveThirtyEight forecast Allred as the winner in 86 out of 100 simulations. The Cook Political Report lists the district as “Likely Democratic,” while the forecast from Politico has it as “Lean Democratic.” If Allred loses this race, a lot of things will have gone wrong for the Democratic Party on election night.