It is fall of an election year, and the Texas Democratic party finds itself face-to-face with a longtime nemesis. No, it’s not Rick Perry. Nor is it Texas Republicans. The biggest roadblock to the success of the Texas Democratic party over the past 32 years has been the national Democratic party. When overreaching Democrats are in power in Washington, it always spells bad news for the state party. The years that Texas Democrats have fared reasonably well have been when overreaching Republicans were in power, as in 2006 and 2008, when the party made significant gains in the state House of Representatives. But the worst-case scenario for Texas Democrats is the situation that currently exists: an unpopular liberal Democratic president in the White House. A Rasmussen poll taken after Barack Obama’s August 9 trip to Texas found that only 34 percent of likely Texas voters approved of the way he is handling his job, with 65 percent disapproving. No wonder the current Democratic gubernatorial candidate, Bill White, stayed far away, heading to West Texas while the president toured Austin and Dallas.

This story is all too familiar to Texas Democrats. Even Lyndon Johnson and Sam Rayburn were acutely aware of the divide that separated the state party from the national party. (LBJ biographer Robert Caro relates how Rayburn’s congressional colleagues gave him a car in 1947. It bore a plaque that read “To Our Beloved Sam Rayburn—Who would have been president if he had come from any place but the South.”) The last Democratic presidential nominee to carry Texas was Jimmy Carter, in 1976; two years later, double-digit inflation and a bruising battle over ceding American control of the Panama Canal had sapped Carter’s popularity. Meanwhile, a divisive Democratic primary battle between incumbent governor Dolph Briscoe, a conservative Democrat, and Attorney General John Hill ended with Hill upsetting Briscoe. In those days Texas was a one-party Democratic state, and no one gave the Republican candidate, Bill Clements, much of a chance. But the rural Democrats who had supported Briscoe threw their support to Clements. The symbolic moment from that campaign was a dinner in Amarillo that both Clements and Hill attended. During the meal, Clements declared, “I’m going to hang Jimmy Carter around John Hill’s neck like a dead chicken,” whereupon he pulled out a rubber chicken and tossed it at Hill. The ersatz fowl splashed onto the plate of the Amarillo mayor’s wife, but Clements went on to become the first Republican governor since Reconstruction. For the first time, but not the last, a Republican was able to exploit the state’s antipathy for the national Democratic party.

In the 32 years since Clements’s election, Democrats have held the governorship only twice: Mark White, elected in 1982, and Ann Richards, elected in 1990. Both served one term and lost their races for reelection. Today, Texas Democrats feel like the outcasts of the family: distant relatives who have been dropped from the Christmas card list. They complain that national figures in the party care about Texas only when they need to raise money, taking contributions out of the state but giving nothing back.

Such is the hill that White has to climb if he is to reverse the fortunes of his party. The conventional wisdom about the race is all in Perry’s favor. Once again, Democrats have produced a president whose policies are hugely unpopular here. An August media barrage mounted by a White ally failed to narrow the gap. Republicans are more motivated to vote than Democrats. White is in the position of a quarterback whose team has trailed for the entire game and whose only hope is to throw desperation passes—Hail Marys, if you will. So let’s try to call the plays.

White’s home county has 15 percent of the state’s registered voters. As a former Houston mayor, he should run well there, but he must focus on rolling up a big lead in the city, which tilts Democratic. The suburbs are Republican. Luck has not been on his side. A recent fire that destroyed most of Harris County’s voting machines is very likely to cause a major disruption on Election Day—long lines, perhaps paper ballots. This could seriously damage White’s chances. White will need to win the county by 56 percent in order to be competitive statewide. The last Democrat to achieve this margin in a statewide race was Bob Bullock, in 1994, in the same election in which Ann Richards lost to George W. Bush. Even if White were to match Bullock’s performance, he’ll still have to run well in Dallas, Bexar, and Travis counties and in the big border counties, where turnout is always problematic. As for the rural vote, forget it.

White will go into the media phase of the campaign with more cash on hand than Perry—$9,045,425.60 at the end of the July 15 reporting cycle to Perry’s $5,868,373.62. This is not the first time that Perry has faced a candidate who could outspend him. The other occasion came in 2002, when the Democratic candidate for governor was multimillionaire Laredo banker and oilman Tony Sanchez. The Sanchez campaign did not spend its money effectively. Perry’s campaign went for the jugular and tried to link Sanchez to drug dealers. The result was an easy win for Perry. The lesson for White is that cash is useful only if you spend it wisely. Attacking Perry, as Kay Bailey Hutchison did, over old issues like the Trans-Texas Corridor or mandatory HPV vaccinations isn’t going to get the job done. (One of Perry’s biggest advantages in this race is that most of the issues White can use were already raised by Hutchison in the Republican primary. Voters have heard it before, and they weren’t moved.) The one thing that might work is an attack on Perry’s work habits and lifestyle. White has labeled Perry a part-time governor who works about seven hours a week. He has also raised questions about the governor’s lavish lifestyle in a $10,000-a-month rental house while the fire-ravaged Governor’s Mansion is undergoing repairs. In a political climate that is rife with conservative populist anger, casting Perry as a closet elitist could be effective. White has to go all-in with this populist message: Spend every last dime of the $9,045,425.60 on ads that show Perry lounging by his pool.

The basic dynamic of the race has been clear since the spring. It’s Clements with his rubber chicken all over again. All Perry has to do to win is keep making the race about Washington. For the duration of the campaign he is going to define White as an Obama Democrat and attack Obama on border security and health care and taxes. White must make Texas the issue. He is going to have to talk about dropout rates, underachieving schools, clogged highways, uninsured families, the second-highest home insurance premiums in the country, and an $18 billion hole in the budget, notwithstanding Perry’s braggadocio about the Texas economy. It is going to take a herculean effort to get Texans’ minds off Obama, though. All the heat in the race is about Washington. White is going to have to remind voters constantly that their votes will determine what happens in Texas during the next four years, not what happens in Washington. “Rick Perry wants to talk about Washington,” he should tell voters. “I want to talk about Texas. Rick Perry’s Texas.”

The Rasmussen poll found that White had the support of 84 percent of Democratic voters, while Perry had the support of 72 percent of Republican voters. This number is an indication that hard feelings linger from the Republican primary battle between Perry and Hutchison. Perry is a polarizing politician. He polarizes Democrats and he polarizes Republicans. That’s why one out of four Republicans is not supporting him. If White can raise that ratio to one out of three and get them to vote for him, the race will tighten considerably. Never mind that he is a former chairman of the state party. White’s message must be that he will put partisanship aside to work with Republicans—but Perry will put partisanship first. He always does.

This is the one facet of the political climate that favors White. Perry is running for a third full term. If elected, he could end up serving fourteen years in all. One of the most powerful phrases in politics is “It’s time for a change.” White doesn’t have to say a lot—just that Perry has been in office too long and has too little to show for it. His target audience is independents and women; among the latter demographic group, he and Perry were tied at 44 percent in the Rasmussen poll. Then he has to hope that a whole lot of Texans wake up on the morning of November 2 agreeing with him.

There is a sixth Hail Mary, one that Democrats have long prayed for. It is, of course, the inexorable growth of the Hispanic vote. In due course, it will make Texas a Democratic state again. But not by November, and perhaps not even in this decade. In the meantime, the question that Texas Democrats must ask is whether the bind in which they find themselves—a centrist state party in a liberal national party in a very conservative state—is one that they will be able to escape. They face the very real possibility that the gains they have made in the past two election cycles, in the two big urban courthouses and in the Texas House of Representatives, could be mostly, perhaps entirely, wiped out this fall. To make matters worse, they are headed into the minefield of redistricting, in which artful Republican mapping could further reduce their numbers, for an entire decade.

But Republicans shouldn’t get too cocky. Most of the polling has shown the governor with about an 8-point lead, despite a political climate that is as toxic for his opponent as anything in recent memory. The way things have gone lately, Texas Democrats tend to lose these races by 10 points or more. If White loses by single digits, the Democrats should take some encouragement. And they can also take comfort in the fact that, regardless of who’s in the White House, this is the last time—please!—that they’ll have to contend with Rick Perry. 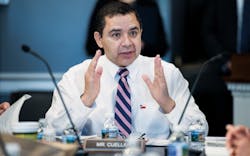 Our Aggie Governor’s Prediction for a Democratic-Leaning State… 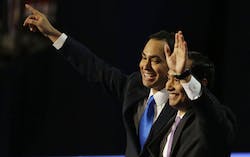 How Did Julián Castro Do? 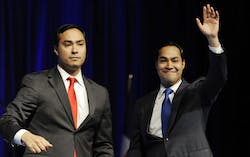 Everything You Wanted to Know About Julián Castro