George W. and Laura Bush returned to the White House for the unveiling of their official portraits Thursday, where they were warmly greeted by its current occupant.

President Barack Obama talked about what he and his predecessor had in common, including dealing with the economic crisis and Al Quaeda. Then the jokes began.

“George, I will always remember the gathering you hosted for all the living former presidents before I took office, your kind words of encouragement,” Obama said. “Plus, you also left me a really good TV sports package.”

“I use it,” the President then added, with spot-on timing.

As Mark Lander of the New York Times reported, Bush 43 “steered clear of substantive remarks about Mr. Obama’s presidency, instead jesting about how the White House collection would now start and end with a George W. (the other being George Washington).”

“I am also pleased, Mr. President, that when you are wandering these halls as you wrestle with tough decisions, you will now be able to gaze at this portrait and ask, ‘what would George do?'” Bush also said.

As Shawna Thomas of MSNBC noted, 43 did have some poignant words for 41, who attended in a wheelchair (and no doubt, some swanky socks):

“I am honored to be hanging near a man who gave me the greatest gift possible: unconditional love. And that would be number 41,” he said, to sustained applause.

Dubya then joked, when introducing Laura: “It is my privilege to introduce the greatest first lady ever. Sorry, Mom. Would you agree to a tie?”

Among the attendees noted by the Times‘ Lander (in addition to George and Barbara Bush and George W. and Laura’s two daughters Jenna and Barbara) were Karl Rove, Donald Rumsfeld, Alberto Gonzales, and Andrew Card.

You can watch the full ceremony at the White House website, or below, a highlights package of the laugh lines from Evan McMorris-Santoro of TPM (via MSNBC): 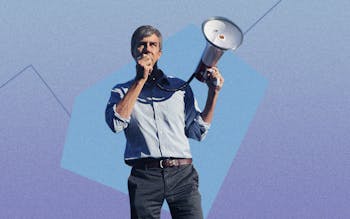 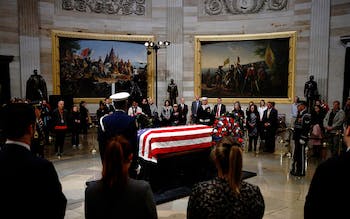 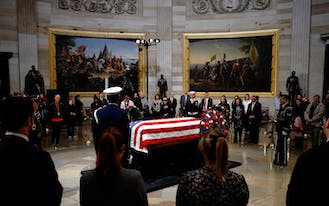 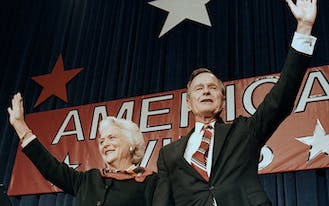