“I think they need to rescind it, do due diligence and make a more accurate list,” Carlos Cascos, who served as Abbott’s secretary of state from January 2015 to January 2017, said of his former office. “They contact everyone and admit to it and say, ‘We made an honest mistake,’ and recompile the list.” Cascos’ belief that the advisory should be rescinded aligns with the demands made by a number of civil rights groups who point out the data is inherently flawed.

“We are glad to see a grown up in the room,” said state Representative Rafael Anchia, D-Dallas, and chairman of the Mexican American Legislative Caucus, which also called on the secretary of state to rescind the list. “Former Secretary Cascos clearly recognizes that this was a failure by the Secretary of State’s office and that it’s irresponsible to cast a shadow on eligible voters. Secretary Whitely must rescind his advisory and notify all 254 Texas counties immediately. His Friday news dump was premature and failed to withstand minimal fact checks. It is a disgrace and offensive to new U.S. citizens that they are on a list described as “non-citizens voting illegally.” We strongly discourage county election officials from taking action on the error-filled SOS lists or purging any voters without a complete investigation into how these lists were compiled.”

Cascos’ comments came after a morning news conference at which Abbott downplayed concerns over the actions taken by the current Secretary of State David Whitley. “It’s important that the secretary of state, DPS, the counties, everybody work together to make sure these lists are accurate,” Abbott said. “In the initial information released by the Secretary of State’s office, they were clear that it was weak match and said, ‘Listen, this isn’t a hard and fast list.'”

Cascos said he believes that his successor, Whitley, has an obligation to notify county elections officials of potential problems related to non-citizens being on the voting roles. But he also said Texas Attorney General Ken Paxton “kind of blew this” by immediately making this issue political.

Last Friday, Whitley sent an elections advisory to all county elections administrators that the secretary of state’s office had compared voting roles with a Department of Public Safety database and concluded that 95,000 people identified by DPS as non-citizens have a matching voter registration record. Of those, approximately 58,000 have voted in one or more elections.  Whitley said the information was shared with Paxton’s office in case the state’s top law enforcement officer wanted to pursue prosecutions of these people.

“Sending the list to the attorney general’s office gives the appearance that they are ready to prosecute 58,000 people,” Cascos said. “What they probably should have done is waited until they verified the information.”

Indeed, reports began to surface almost immediately from counties that significant problems with the list existed. The Dallas Morning News reported that at least 20,000 names on the list had been removed because of flawed data. Many elections officials reported getting phone calls from the state pointing out the mistakes. Cascos said that in his two-year tenure as the state’s chief election administrator, he never went through the type of exercise that led Whitley, a former aide to Abbott, to send out the advisory. “To my knowledge, that did not occur while I was in office,” he said. Cascos also pointed out that he was a member of the Texas Public Safety Commission, which oversees the DPS. “I never saw such a correlation [between DPS and voter role databases]. That discussion never took place.” 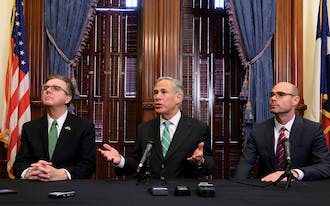