Update: On Friday, August 2—several weeks after this story went to press—FEMA reversed its earlier decision to deny the City of West additional federal disaster aid and approved a major disaster declaration for the town that will bring as much as $20 million in additional federal funds.

This no doubt comes as good news to West Mayor Tommy Muska, who must be relieved to get more help, from whatever source, to rebuild his ruined town. A less sympathetic character in this drama is Governor Rick Perry, who appealed FEMA’s initial decision in June and asked the agency to shell out millions more to pay for infrastructure damaged in the blast. Perry made a show of his displeasure with the Obama administration when it first denied additional aid, hinting at the president’s hypocrisy.

But for a governor who has spent so much time touting Texas as a model for economic growth and prosperity thanks to low taxes and lax regulations, it smacks strongly of duplicity for him to ask the feds to pay for an industrial accident—especially after he dismissed the idea that tighter state regulations might have prevented the disaster. All the more ironic, too, that we have billions sitting in the Rainy Day Fund and the legislature in yet another special session, trying to figure out a way to spend some of it on transportation infrastructure.

Some might argue that whether the aid comes from Austin or Washington it’s all taxpayer money, so what does it matter? All that counts is that West gets the support it needs. While it’s true that West needs the funds to rebuild, the more local the aid the better. Public welfare dollars from local taxpayers is more accountable than those that come from the distant halls of the federal government, and local aid is more likely to have the effect of building community rather than encouraging dependence.

After all, is $20 million too much to spare from the Rainy Day Fund? On Thursday, the state comptroller told lawmakers that oil and gas production taxes would likely be $900 million higher than projected for the fiscal year, with $675 million of that going into the Rainy Day Fund. We could have rebuilt West without going hat in hand to FEMA, and we should have. This could have been a chance for the governor to take responsibility, show genuine leadership, and reassert the hallowed principle of Constitutional federalism by rejecting federal aid and instead dipping into the Rainy Day Fund. If Perry wants so badly to spend Texas’s tax dollars on infrastructure—and pay for it out of the state’s emergency fund—he should have started with West.

Original story: On April 17, a small fire at the West Fertilizer Company ignited two tanks of highly volatile ammonium nitrate, triggering a massive explosion that killed fifteen people—twelve of them first responders—and devastated the small community of West. Not surprisingly, the blast led many to question whether the safety regulations governing storage of explosive materials were stringent enough. Yet despite criticism from lawmakers in Washington, Governor Rick Perry and other state Republicans have made it clear that they have no intention of enacting what they believe are unnecessary regulations.

But the West explosion has also launched another sort of debate, about the role of government in the lives of its citizens. In the wake of such a disaster, whom should we turn to for help? In the immediate aftermath, West became a town of volunteers. Neighbors and local churches provided shelter, cleared debris, and donated food, clothing, and counseling. Townspeople took a fierce pride in caring for their own. “These are our neighbors. They are coming to help,” Waco police sergeant William Patrick Swanton told reporters. “You will find that in Texas. You will find that across the United States. We put everything aside when it comes to these types of situations.”

Soon after, the Federal Emergency Management Agency descended on West to join a phalanx of state agencies on the scene. All of them had important roles to play in the initial response. But when FEMA announced in June that it would provide the town with only $16.6 million in recovery funds, reasoning that the remaining millions in repair costs could be paid by the state, the town was outraged—and so were Republican leaders. State attorney general Greg Abbott declared, “While President Obama has turned his back on Texas and gone against his word, we will continue to take care of our neighbors.” Perry told reporters, “I was on the stage when the president looked into the eyes of the people of West, Texas, and said, ‘We’re going to do everything we can to make sure you are taken care of.’ This doesn’t square with that.”

Shaming the president might get the conservative base fired up, but it’s the wrong way to think about our relationship to Washington—as if the people of West should rely on the feds to make things right. They shouldn’t—and they aren’t. Three days after the explosion, nearly one thousand volunteers had been registered, three warehouses were processing donated goods, and the Red Cross was asking people to hold off on donations because it was inundated. First Baptist Church in West has spent the spring and summer knocking down damaged homes with borrowed construction equipment and volunteer labor, using hundreds of thousands in donated funds to pay for fuel and debris removal. (And let’s not forget that the firefighters killed in the explosion were themselves volunteers.)

The response of this community underscores a fundamental truth about democracy: civil society contracts in proportion to the growth of government. And where there is less of the latter, there is more of the former. President Obama likes to say, “We’re all in this together,” but the collective action he’s referring to is almost always government action, not the basic neighbors-looking-after-neighbors ethos West has shown.

What disasters like this demonstrate is the strength of voluntary associations. For conservatives, such associations are important not only in case of emergency but as a means of balancing the power of a distant yet pervasive government. In 1835 Alexis de Tocqueville wrote that “the more [government] stands in the place of associations, the more will individuals, losing the notion of combining together, require its assistance: these are causes and effects that unceasingly create each other.”

Tocqueville recognized that in Europe the aristocracy, together with voluntary associations, had been a vital check on the power of the crown. The danger he saw in America was that, without a powerful aristocracy, the country’s only external check on its government was civil society. Individuals, having broken from the class-bound societies of Europe, were more equal, but they were also weaker and therefore only able to take action collectively, in the form of associations.

Of course, sometimes civil society isn’t enough, and government needs to step in—as it did in West. The damage, estimated at more than $100 million, is more than any small town could deal with on its own. But aid from Washington’s tangle of capricious bureaucracies, even in the face of disaster, is often a mixed blessing. The same Internal Revenue Service that brazenly targeted tea party groups has yet to recognize the West Long-Term Recovery Center as a nonprofit, making it difficult for the group to accept tax-deductible donations at a time when it desperately needs to do so.

That should give us pause, especially in Texas, where we like to crow about our minimal government. Perry is in the habit lately of bragging about this in other states, in hopes of luring more companies here. For the most part, he makes a compelling case. But he fails to mention that Texans still rely heavily on our state government, and our state government in turn relies heavily on Washington, which no one likes to talk about. The $94.6 billion in general revenue the Legislature appropriated in May is considerably less than the $197 billion All Funds budget, which includes federal funding. For all the bluster about Texas’s being a laissez-faire state, we rank eleventh in terms of our reliance on federal funding as a percentage of state general revenue (Perry’s frequent target, California, is thirty-seventh). Washington will pay for 35 percent of all state spending in the upcoming biennium, a share that’s been slowly growing over the decades, bringing more federal conditions, requirements, and influence. On top of that, the federal government directly infuses Texas’s local governments with billions of dollars every year, inflating city and county budgets while entrenching a culture of dependence.

Instead of incessantly boasting about the “Texas miracle,” conservative leaders should be honest about the degree to which we rely on federal funding and boast instead about how Texas is a place where we take care of our own, even when the feds don’t come through. If FEMA won’t cough up all the money the state has requested—an additional $17 million—then Texas should tap into the billions sitting in our Rainy Day Fund (that’s what the fund is for, after all). And maybe Perry should make good on his commitment to pass $1.8 billion in tax cuts so Texans and Texas businesses have more to spare when disasters strike and their neighbors are in need.

If conservatives aren’t willing to put their money where their mouth is and take more responsibility for welfare on the local level, the array of private associations standing between the impassive state and the individual will atrophy. And if we gradually let the government assume the role of sole caretaker, we should not be surprised to find ourselves helpless in its sudden absence—or worse, smothered by its embrace.

John Daniel Davidson is an analyst with the Center for Health Care Policy at the Texas Public Policy Foundation. 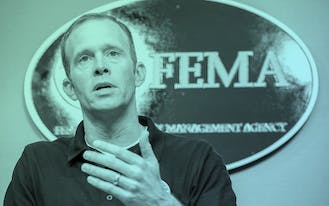 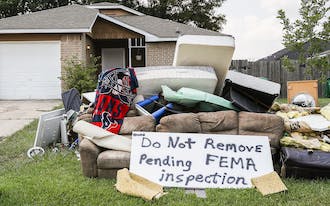 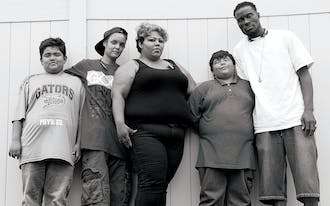 Displaced by the Storm: Texas Evacuees Without Options