Through the past two legislative sessions, Governor Greg Abbott has convinced lawmakers that Texas should spend $800 million a year on border security. Now that President Trump has authorized placing National Guard troops on the Rio Grande, the state can consider using the money for other expenses, such as retired teacher health care, said the incoming chairman of the Texas Senate Hispanic Caucus.

Senator Jose Menéndez, a San Antonio Democrat, said the president’s order to send troops to the border until Congress agrees to build the wall he promised is ridiculous.

“We don’t have a military reason to have them down there. If this was to combat narcotrafficking or violent crime, that’s one thing, but when you have unaccompanied minors coming over, that’s more of a humanitarian crisis than a military crisis,” Menéndez said. “This feels like nothing more than political theater.”

So far, he said, Texas cannot show what the state has gotten for the money that has been spent over the last biennium and the current one, but with Trump’s action there is no more need to spend it. The justification for the state doing border security was that the federal government was not adequately engaged.

“If I were to try to find some sort of silver lining in this, while I don’t think this is going to deal with any kind of direct threat, I would say now there shouldn’t be any excuse for sending $800 million to the Texas border every year. We’ve now spent $1.6 billion with no metric for telling us whether there was any success,” he said.

With her election to congress almost a sure bet in Houston, state senator Sylvia Garcia resigned as the Texas Senate Hispanic Caucus chair and is being replaced by Menéndez. Garcia said she has been honored to serve as caucus chair.

“Much of our work has been Latino Summits across the state designed to engage activists and young people in the legislative process,” she said in a statement. Garcia said proposed legislation came out of the summits, and the caucus worked with allied interest groups in the courts.

Menéndez officially took over leadership of the caucus on April 3.

“I am honored to lead the Senate Hispanic Caucus at this crucial time in our history. We are all grateful to Senator Garcia for building the infrastructure of the organization, and strengthening its initiatives with her passion, consistency, and organization,” Menéndez said in a statement. “The Latino Summits have allowed the caucus to involve several critical populations from across the state, which has transformed the role of participants and empowered them to better engage in the legislative process. I look forward to strengthening the future of the organization while connecting our communities to legislative issues and fighting for initiatives on behalf of the State of Texas.”

Garcia won the Democratic nomination for the Congressional District 29 seat being vacated by retiring U.S. representative Gene Green. The district is heavily Democratic, so Garcia is expected to become the first Latina to represent Houston in the U.S. House. However, she will first face the winner of the May 22 Republican runoff, either Phillip Aronoff or Carmen Maria Montiel. 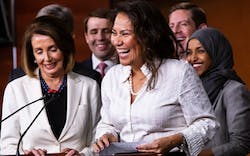