“You should have high, lofty, Texas expectations,” said Jeb Bush, the former governor of Florida, giving the keynote address at the Texas Business Leadership Council’s Education Summit in Austin on February 26. “The kinds of expectations you guys talk about all the time.”

It was the kind of appeal to tribal intuition that one would expect from a man who had already described himself as a Texan by birth, albeit a Floridian by choice. And the moment was propitious. Education reform has emerged as a major focus of the 83rd session, and conditions on the ground favor action. In 2011, the Legislature made deep cuts to public education—about $5.4 billion less than expected, given population growth and the state’s previous funding commitments. The current Lege will increase school funding, but the prevailing view, at least among Republicans, seems to be that we might as well make sure the money is well-spent.

Furthermore, although Texas may be one of those states where ideas are only as viable as their funding mechanisms, the Lege has an opportunity to think out loud a little. “I look at challenges as opportunities,” said Dan Patrick, the state senator from Houston and chairman of the Senate Education Committee. What he meant by that was that the Lege probably won’t fiddle with school finance until the current lawsuits on the subject are addressed by the state supreme court, freeing up the legislators to focus on policy reforms.

The result is that there are so many suggestions swirling around public education in Texas during this legislative session that addressing each of them would exhaust any reader’s patience. Even describing the reform movements is complicated, because most of them don’t fall along neatly partisan lines, and the boundaries between the various camps are often blurry. Speaking very roughly, we could say that one group has a business-minded approach. They think the state should make more use of incentives, for example, on the premise that schools will improve if they have a reason to do so. Another camp is focused on working within the public schools more than trying to promote competition among (or even with) them. These reformers tend to emphasize things like universal pre-k, greater workforce training, additional resources for teachers, and so on.

Bush—or JEB, as we might call him for clarity—was in Texas as part of a national push to tout the education reforms he signed during his eight years as governor. The next morning, he testified before the Senate Education Committee. At the TBLC keynote, he began by emphasizing the value of standards and accountability measures that he had implemented in Florida. Some of them, he noted, weren’t even that complicated. For example, the state stopped rating schools with Roman numerals, and started using the same letter grades the schools themselves use. The issue wasn’t that Floridians can’t read Latin, but that the numbers were ambiguous. Bush said he still forgot whether V was the top or the bottom of the scale. If a school earns an F, though, the parents will take notice. “Without accountability, this is all a charade,” Bush said. “There’s a different consequence between abject failure and incredible excellence.”

The crowd was receptive. Accountability has been a focus for state policymakers for many years, but advocates think there is room for improvement. Specifically, a number of speakers touted the need for greater choice. If Texas had a large-scale voucher program, they argued, or more charter schools, failing schools would have to improve, or face a real risk of losing their students—and the tax dollars that are attached to each child. Patrick Dobard, the superintendent of the Recovery School District in New Orleans, said that had worked in Louisiana. Patrick, who has emerged as one of the session’s loudest voices on the subject, argued that school choice was an equity issue. “We already have choice,” he said. “If you’re rich enough, you send your kid to any school you want.”

A number of reformers would take exception to Patrick’s argument; they see efforts to promote school choice, particularly voucher programs, as a distraction from more important issues, if not an outright attack on public education as a concept. In calling for greater attention to equity, however, Patrick was sounding a common note.

Michael Williams, the Texas Commissioner of Education, said that the narrowing the racial achievement gap between Anglos, Asians, African-American and Hispanic students should be Texas’s number-one goal at the moment. Similarly, Williams noted that nearly two-thirds of children in Texas schools are classified as “economically disadvantaged.” In Texas, as in most states, poverty is correlated with ethnicity. That’s an equity issue across the country, but as Williams observed, it’s a particularly pressing concern in a state like Texas, where about two-thirds of school-aged children are black or Hispanic.

Few speakers addressed the equity issue in terms of school finance, perhaps because of the lawsuits and perhaps because that was the point of Texas’s 1993 “Robin Hood” reforms. Curriculum design, however, came up frequently. Williams was one of several advocates to call for Texas to maintain high standards across the board, rather than siloing students into college-prep or career-oriented tracks. Skilled trades like welding or auto repair, he observed, increasingly require STEM training. There was an racial aspect to this issue too, Williams continued, suggesting that black or Hispanic students are more likely to be shunted into vocational courses than their white peers: “I’m old enough, and I’m suspicious enough, to wonder who’s going to be in those career tech classes.”

Some of the reform priorities are in tension with each other, if not mutually exclusive. Other suggestions cut across philosophical lines. Texans across the spectrum, for example, are increasingly wary of things like the high-stakes STAAR tests. The reforms that result will have to be pragmatic as well as principled. That was clear when JEB and his son George P., who was also at the summit, talked up incentive pay for teachers. Texans might find the idea palatable in theory, but it hasn’t elicited much discussion in the state, because it would mean drumming up more public money. There was, at least, widespread agreement on the need for reform—and for the need to be aggressive about it. “I urge you to be big and bold, and if people get offended, so what,” said JEB. “Politics can’t just always be like namby pamby land.” 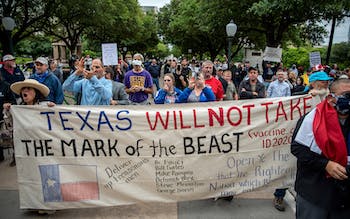