Editor’s note: On January 16, John Daniel Davidson, the director of the Center for Health Care Policy at the Texas Public Policy Foundation, published a piece titled “On the Economics of Medicaid Expansion.” This is a response to that story.

Governor Greg Abbott is a thinking man’s Rick Perry. At least, that’s the image Abbott has crafted for himself. Throughout the campaign, Abbott released papers on his positions, including one on health care. Once elected, he hosted press conferences at the Capitol to discuss his policy vision and announce his policy team. Recently, Abbott told the Wall Street Journal, “I view things in a real deliberative type fashion,” adding “I want all the best information.” Longtime GOP operative and campaign advisor Dave Carney agreed, telling the Journal, “Abbott was a judge; you won’t know how he’s going to rule until he’s had a chance to think it through.”

If Abbott is the judge, what evidence is he looking at for Medicaid expansion? An evaluation of his existing arguments suggests that he, to be generous, hasn’t reviewed the best information, or at least not yet. If he did, here’s what he would already know.

First, the economic impact. A state auditor’s report from September 2014 found that Rick Perry’s much-touted Texas Enterprise Fund created just over 48,000 jobs over a 10-year period. Abbott says he wants to be “bigger and bolder” on job creation than Perry. Medicaid expansion is his best chance at that legacy. Former Deputy Comptroller Billy Hamilton’s 2013 study projected that Texas could create as many as 236,000 jobs by 2016. Another study, by economist Ray Perryman, finds the total could rise as high as 300,000 jobs over ten years. Even in a worst-case scenario where Hamilton and Perryman’s studies are off by a whopping 75%, expanding Medicaid would do more for job creation than a decade of Perry’s ill-managed Texas Enterprise Fund. Beyond the projected job creation totals, Hamilton’s study concludes that expanding Medicaid offsets the $1 billion borne by local governments to cover uncompensated care costs and would significantly lower the extra $1,800 in higher premiums Texas taxpayers pay each year to cover the uninsured.

The Texas Public Policy Foundation’s John Daniel Davidson, who offered a piece on the economics of Medicaid expansion on January 16 for Texas Monthly, doesn’t believe Hamilton or Perryman. He argues that Texas will lose jobs if Medicaid is expanded. However, their information is based on a flawed study from a center-right group, the American Action Forum. The study is anchored in the assumption that more people enrolled in coverage increases the premiums everyone pays, thus stifling economic opportunities. The study Davidson cites reflects a long-existing argument TPPF has made itself in the past – that “the federal deficit is going to absorb most of the increase in insurance costs,” a problem TPPF argued “is perhaps the single most crucial fact about the entire law.”

Fortunately for Texans, though unfortunately for TPPF, that’s not the case. First, the U.S. deficit is shrinking. As a percentage of GDP, the deficit is at its lowest point since President Reagan, and long-term debt is primarily driven by Bush-era tax cuts, not any laws passed by President Obama. Finally, premiums are growing at a much, much slower rate than before ACA went into effect. Here in Texas, 85% of those who bought health insurance through the exchange used a subsidy to lower the costs. As a result, their average premium was $72-per-month after a 76% discount provided by the subsidies – which was “the seventh lowest out of the 36 states” utilizing the federal exchange.

The doomsday economic scenarios conservatives at TPPF wished for just aren’t coming true, which is no surprise to anyone who followed TPPF’s budget shenanigans in 2013. And it turns  out a lot of other Texas businesses aren’t believing what TPPF is selling, either.

The San Antonio, Fort Worth, Dallas, El Paso, and Houston chambers have determined that the evidence brought forth by Hamilton’s study and other local leaders trumps the messy economic arguments presented by TPPF. (Expect more chambers to announce their support for Medicaid expansion and/or another solution to increase coverage in the coming days). The economic evidence for Medicaid expansion is also why the Texas Association of Business and insurance companies like Blue Cross Blue Shield are on board, not to mention all the county judges of Texas’ major counties. Even the Perry-appointed Texas Institute of Health Care Quality and Efficiency and the state’s Code Red Task Force on Access to Health Care in Texas have come out in support of Texas adopting some solution.

The economic evidence for Medicaid expansion is solid. Evaluating it from a health coverage standpoint is a no-brainer.

Governor Abbott inherits Texas’ lingering status as the state with the worst uninsured rate in the country. 5.7 million Texans lack health insurance, roughly 22% of the state’s population. One million Texans would be covered if the state expanded Medicaid. Until the state does, those Texans will be caught in the “coverage gap” – those who earn less than 100% of the federal poverty level and therefore cannot qualify for subsidies on the exchange. As a result, those one million Texans will not receive preventative care. Without expansion, the emergency room will continue to be the primary place where they seek care.

This is where Republicans like Abbott and Senate Health and Human Services Chairman Charles Schwertner push back – and ultimately fall short. Using evidence from TPPF, they argue Medicaid expansion won’t reduce ER use. They cite one study of a 2008 “test case” from Oregon and, talking point in hand, ignore other evidence.

Here’s the truth: thanks to flexibility granted by the federal government, ER use has declined in Oregon. The state set a hard cap on expenditures per Medicaid enrollee, then hit their marks by utilizing health services more efficiently. The results are very encouraging: Oregon has reduced emergency room visits by 9% among its Medicaid population, and decreased emergency department spending by 18%. Anyone who says ER use goes up with Medicaid expansion ignores current evidence to the contrary.

I believe Texas can do even better than Oregon – if we try. Even if we don’t expand Medicaid directly (which I think we should), we have the option to come up with a different solution. Stalwart conservative Devon Herrick with the Dallas’ National Center for Policy Analysis released a study arguing against straight Medicaid expansion, but for a “tailored program that would maximize the availability of private coverage for low-income residents.” It’s a path other Republican governors are already following. An analysis comparing alternatives to expanding Medicaid finds there are a number of conservative policy proposals the federal government has granted to states – including health savings accounts and co-pay structures championed by Governor Abbott. I’m skeptical of any unique plan, because anything less than full expansion will inevitably limit the health coverage options one way or another, but I’m willing to reserve final judgment until I see a plan on paper.

The question is whether or not Governor Abbott is as willing to be as deliberative about new information, and if he can move past TPPF’s long-standing call for block grants. Abbott mentioned Rhode Island’s block grant in his campaign’s policy paper on health care, during the second gubernatorial debate, and in countless interviews before and since. Only thing is, it never happened. In 2008, President Bush granted Rhode Island a very unique waiver, not a block grant, that allowed Rhode Island to receive an increase in federal spending to go above-and-beyond health services already envisioned. That’s not how block grants work, and why Abbott or anyone else insists the Rhode Island waiver is a block grant remains a mystery.

The only substantive policy challenge to Medicaid expansion is the issue of provider fees, which is the money the state pays doctors and other professionals that see Medicaid patients. That problem exists because former Governor Perry and the Republican-controlled Legislature cut provider rates in 2003 and 2011 – as a means to follow through on larger budget cuts pushed by – you guessed it! – the Texas Public Policy Foundation. To the extent Medicaid is broken, the Republican-controlled Legislature are the ones who broke it. And even despite the reduced provider fees, the Texas Medical Association still backs a tailored solution to closing the Coverage Gap.

If Governor Abbott truly wants the best information to make his decisions, he needs to be willing to listen to voices other than those at the Texas Public Policy Foundation. Republicans who continue to listen to TPPF on health care policy are just like Democrats who listen to the same strategists on how to win statewide elections: until they are willing to listen to someone else, they are doomed to repeat the same failures of the past.

Governor Abbott has an opportunity to do what Perry never could: take several options to the federal government for a unique solution to expand and rework Medicaid, and see how good a deal he can get. If he finds one that works, he wins. If he finds one that doesn’t, he still wins because he can do what he’s doing now – blame the federal government for its inflexibility – but at least demonstrate to everyone else that he tried.

You won’t learn if you don’t ask, and you can’t win if you don’t compete. The fate of one million uninsured Texans, and the economic futures of millions more, are waiting on Abbott to live up to his promise to be a deliberative judge who only wants the best information.

The evidence for Medicaid expansion is clear. Court is now in session.

Phillip Martin is the Deputy Director for Progress Texas and the Texas Research Institute. 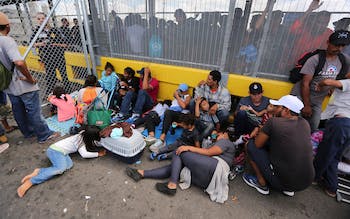