In Thursday’s GOP debate in Sioux City, Rick Perry both steered clear of major gaffes and scored one of the most memorable lines of the night when he compared himself to Tim Tebow, the often-underestimated quarterback of the Denver Broncos.

Perry took around thirty seconds to lay out the Tebow comparison:

There are a lot of folks that said Tim Tebow wasn’t going to be a very good NFL quarterback. There are a lot of people who stood up and said, “Well, he doesn’t have the right throwing mechanisms,” or “He’s not playing the game right.” He won two national championships, and that looked pretty good. We were the national champions in job creation back in Texas. Am I ready for the next level? Let me tell you, I hope I am the Tim Tebow of the Iowa caucuses.

After the debate, Perry told Fox’s Sean Hannity that Tebow “is a great American.” But he likes Von Miller, the Bronco’s rookie linebacker, even better, Richard Dunham reported at the Houston Chronicle‘s Perry Presidential blog. (Miller is a fellow A&M grad.)

The world is unlikely to get Tim Tebow’s read on Rick Perry anytime soon, according to the Denver Post‘s Lindsay Jones. “The Broncos public relations department has already fielded calls from media outlets looking for Tebow’s opinion on the political landscape and the Republican campaigns. All requests have been denied,” Jones wrote. “Tebow won’t even reveal for whom he votes for Heisman, let alone which political candidates he supports.”

Later in the debate, Perry needled the Austin American-Statesman when asked about a story the paper ran in October about a failed loan guarantee program he supervised as state agriculture commissioner. “Don’t believe everything you read in the Austin American-Statesman,” Perry replied. Statesman editor Debbie Hiott said that Perry’s team had never raised any issues with the story, the paper’s Jason Embry and Kate Alexander reported.

Texas Tribune‘s Thanh Tan and Jay Root noted that Perry seemed more confident throughout the debate, but the fact that the Texas governor was “largely ignored” by other candidates did not bode well for his campaign’s future.

The governor continues on his cross-state bus tour of Iowa, part of his Hail Mary strategy to win the state. 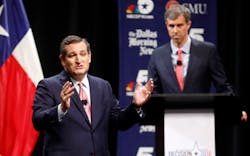 Cruz and O’Rourke Confident in First Debate, But Was There a Clear Winner? 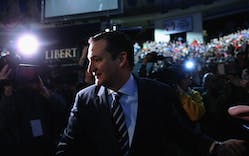