There’s a website called Literally Unbelievable that’s devoted to the Facebook posts of people who think stories from the humor newspaper The Onion are real, a phenomenon that also extends to The Colbert Report.

Now, notes Mediate, we have Governor Perry, who, while on the stump at the Barley House in Concord, New Hamsphire (yes, on the same day as “the speech“), cited a quote about the Occupy Wall Street protests from the Canadian newspaper the Globe and Mail.

The original piece, by columnist Mark Schatzker, was clearly labeled “SATIRE” up top. It included this passage from ‘Jeremy,’ ostensibly a 38-year-old Occupy Toronto protestor.

It’s weird protesting on Bay Street. You get there at 9 a.m. and the rich bankers who you want to hurl insults at and change their world view have been at work for two hours already. And then when it’s time to go, they’re still there. I guess that’s why they call them the one per cent. I mean, who wants to work those kinds of hours? That’s the power of greed.

“I guess greed just makes you work hard,” Perry said in summing up the story, which had been passed along to him by his former bank son Griffin.

But he also prefaced his remark with “I don’t know whether it can be proved up or not,” which was more of an equivocation than some bloggers (the Canadian Press reports that Power LIne‘s John Hinderaker fell for it, and that post appears to have been scrubbed).

The no-doubt delighted Schatzker published a follow-up on Tuesday. Inspired by the Governor, “Jeremy,” realizes all his problems were due to Canada’s high taxes, so he moves to Texas, gets a job picking fruit and ultimately becomes one of the “1 per cent.”

Here’s the video of Perry’s comments: 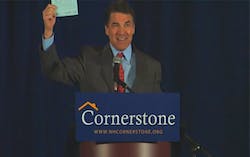 ‘Politico’ Says Perry was on Painkillers During Campaign 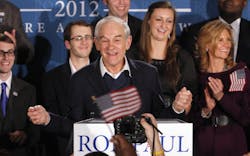 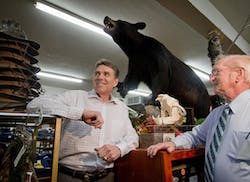 Today in Rick Perry: The Romney Ringtone, Trailing Roemer, and a Smiling Foe