Ron Paul may not get elected president, but he is a baseball Hall of Famer.

The CQ Roll Call Congressional Baseball Hall of Fame, that is, which was established in 1993 to honor players from the annual game between Republicans and Democrats. The 76-year-old Lake Jackson Congressman is the twenty-second inductee, mostly due to one historic homer.

Paul was a solid performer for seven years on the Republican team, but he is being honored largely for a single moment — the night in 1979 when he smacked a pitch from former Ohio Democratic Rep. Ron Mottl over the left-field wall at Four Mile Run Park in Alexandria, Va., a Fenwayesque shot of about 310 feet.

It is believed to have been the first out-of-the-park homer in the history of the Congressional game. Even Ripley’s Believe It Or Not! said so (though Paul is no longer the sole player to hit one):

Paul’s induction ceremony will take place tonight at Nationals Park in Washington, D.C., where the elephants and donkeys will battle on the diamond for the seventy-fifth time (the Rs are 38-35-1 in the all-time series).

In a longer Roll Call story by David Meyers, Paul spoke about the high school football injury that ended his athletic career. The torn knee cartilage continued to bother him in adulthood, limiting his Congressional baseball career to seven games.

He retired from Congressional baseball with a .294 batting average, six runs scored and six runs batted in during seven games.

These days Paul is more widely known for his libertarian take on government. But even back in 1984, as he was preparing to leave the House, Paul had thoughts on how lawmakers could better spend their time.

“I do believe that if the Democrats and the Republicans played more baseball and legislated a lot less, the country would be much better off,” he said on the chamber floor on Sept. 19, 1984. “I am convinced the annual baseball game played by the Republicans and the Democrats must be considered one of the most productive events in which the Members of Congress participate.”

In that same vein, Michael Luciano of Policymic noted that “[Paul’s] career total of one home run ties the number of audits there has been of the Federal Reserve since it was established in 1913, which was also accomplished by Paul since he sponsored the legislation that made it happen.”

Needless to say, Paul is not on the roster for tonight’s game, but his son, Kentucky Senator Rand Paul is, along with Texans Joe Barton, Kevin Brady, Mike Conaway, Louie Gohmert, and Pete Sessions (all Republicans).

Below, a lengthy video of Paul’s performance in the 1983 game, in which he went two for three with a hard-hit double and two RBIs: 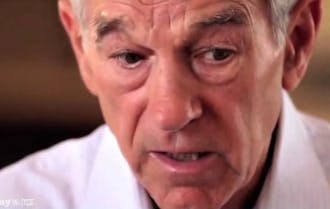