A Tenuous Defense of Ken Paxton

On the surface, at least, 2014 was a very good year for Republicans in Texas. At the beginning of the cycle, Democrats had hoped the state might be turning blue. But on election night, Republicans quashed that daydream so thoroughly that their success seemed almost punitive. Once again, the GOP ran the table. The party elected a new governor, lieutenant governor, comptroller, attorney general, agriculture commissioner, and land commissioner—all by at least a 19-point margin.

Yet despite Republicans’ electoral success, all is not well in the party or the state it has dominated for two decades and counting. At some point in the future, if historians are trying to figure out when Texas Republicans began to squander what could have been a permanent majority, they may point to 2014 as a watershed year—the moment when the party’s internal rot became evident. The problems with the Texas GOP today perhaps aren’t as glaring as the ones Texas Democrats faced in 1972, a result of the stock-fraud scandal known as Sharpstown. In March, two lawmakers, including House speaker Gus Mutscher, were found guilty of conspiracy. Later that year, voters ousted the incumbent governor and lieutenant governor, Preston Smith and Ben Barnes; they also replaced much of the Legislature. It would take twenty more years for the century of Democratic political hegemony to end, but the downfall had begun.

Since last year’s general election, the apparent strength of the Republican party of Texas has increasingly struck me as a trick of the eyes, enabled by the torpor of the state’s Democratic party and complacency among the voters themselves. And while the bloat and corruption of the GOP may not have reached Sharpstown levels, the effects on our state’s politics, policy, and public discourse are palpable, corrosive, and consequential.

Our new attorney general, Ken Paxton, is a clear symptom. As most readers probably know, he was indicted in late July for three felonies under state securities law. That’s not good, of course. But the indictment isn’t the most troubling part of the story. What’s troubling is that Paxton was elected at all.

Even before his legal troubles became public, his credentials for high office were underwhelming. In 2002 Paxton, a lawyer from McKinney specializing in wills, trusts, and investments, won a seat in the Texas House. Voters in Collin County would reelect him four times, though Paxton failed to author any significant legislation, chair any major committees, or even take an influential role in any important policy debates. Not until 2010, in fact, did he evince any notable political ambition. That year, Paxton announced that he would try to unseat Joe Straus as speaker of the Texas House. A formal challenge never materialized; Paxton took himself out of contention at the beginning of the 2011 session, citing a lack of support. But by positing the challenge, Paxton had won esteem among the growing tea party subset of the electorate. He shored up his credentials in 2012 by endorsing Ted Cruz over David Dewhurst in their bitter fight for the party’s U.S. Senate nomination. Hitching himself to Cruz’s rising star is perhaps Paxton’s singular political accomplishment. The people—or at least the several hundred thousand GOP primary voters who matter most these days—rewarded him for it. In 2012 he won a seat in the Texas Senate. Then, in March 2014, buoyed by repeated praise from Cruz, Paxton placed first in a three-way Republican primary for attorney general and began preparing for a runoff against his former House colleague Dan Branch.

By then, however, Paxton’s transgressions were becoming public. During the campaign, in response to a civil complaint, Paxton addressed a long-standing paperwork delinquency. Some of his clients in McKinney had needed investment advice as well as legal services. So, on several occasions, Paxton had referred his clients to Mowery Capital Management, also in Mc­Kinney. The owner of that firm, Fritz Mowery, was a friend of Paxton’s, and the two had an arrangement: Paxton would receive 30 percent of the asset-management fees from any clients he solicited on Mowery’s behalf. Per state law, anyone who solicits clients on behalf of an investment adviser is required to register with the Texas State Securities Board. Paxton did so in 2003 and again in 2013. However, in 2004, 2005, and 2012, when he also solicited clients, he did not register. Paxton admitted as much. On May 2, several weeks before the primary runoff, he was reprimanded and fined by the Texas State Securities Board. Though the issue was widely reported, Paxton easily defeated Branch in the runoff and proceeded to coast to victory in the general election despite barely bothering to campaign.

But Paxton’s administrative penalty drew the attention of Texans for Public Justice, a left-leaning watchdog group, which noted that Paxton had effectively admitted to committing a third-degree felony and filed a criminal complaint with Austin prosecutors. The matter was eventually referred to Collin County, where, in April of this year, the district attorney’s office requested that the Texas Rangers begin an investigation into Paxton’s investment work and a judge appointed two special prosecutors to oversee the case.

The result was the indictment, which was made public in August and includes three counts. There’s the third-degree felony charge concerning Paxton’s admitted failure to register. The other two charges are more serious, alleging securities fraud, which is a first-degree felony. According to the special prosecutors, Paxton encouraged two people (one of them state representative Byron Cook) to make significant investments in the McKinney-based tech company Servergy, in part by giving them the impression that he too had invested. In reality, Paxton was being compensated by the company, which is currently under investigation by the federal Securities and Exchange Commission for allegedly lying to investors. Each first-degree felony could send Paxton to prison for 5 to 99 years.

Since the beginning of the saga, Paxton has maintained that his failure to register was an innocent oversight and that it should be treated as such. “We have paid an administrative fine of one thousand dollars,” said his spokesman, Anthony Holm, in May 2014, after the disciplinary order was issued. “We are pleased this matter has been resolved.” A few days later Holm dismissed the news that a similar civil complaint had been filed with the federal SEC: “This is clearly a political hit job.” In July Holm bristled at Texans for Public Justice’s criminal complaint: “Now, roughly one hundred days prior to the general election, a Democrat front group admitted that they are trying to make this matter something bigger than it was.” In August he scoffed at the news that another group, the Texas Coalition on Lawyer Accountability, had filed a complaint with the state bar: “Frankly, it’s a bit silly.”

After the investigation began, in April of this year, Holm was less amused. “This appears to be a politically motivated effort to ruin the career of a longtime public servant,” he said this summer, adding that the special prosecutors, Houston lawyers Kent Schaffer and Brian Wice, were determined to try the case in the media. “These dominoes are falling,” he said in an interview with an Amarillo TV station, “and the victim is Ken Paxton.” (It’s worth noting that Holm would leave Paxton’s team in late July.)

Some may feel it’s a bit of a stretch to cast Paxton as the victim. He is a Republican, in a state where Republicans hold all the political power, and he was indicted in his hometown, in Collin County, which is not exactly a liberal enclave. Undeterred, though, Paxton has essentially argued that he is merely a goof rather than a crook. That may, in fact, be true. Paxton has always attributed his legal missteps to innocent error. He didn’t know it was against the law. He’s corrected the forms now. But corruption and incompetence are not mutually exclusive, and besides, legally speaking, Paxton’s motives don’t make a difference.

So for him to cry victim is fairly undignified. It’s also entirely predictable, considering the circumstances under which Paxton achieved high office in the first place. He became attorney general by becoming the Republican nominee. And he became the nominee by casting himself as the most conservative candidate in the Republican primary. He cited no real evidence to support this assertion because he didn’t have to. His connection to Cruz was apparently all he needed; his thin record and dubious qualifications were of comparatively little import to the sliver of the electorate that turned out for the runoff. Paxton isn’t the first Republican to use this playbook—he wasn’t even the only person to use it successfully in 2014—and he won’t be the last.

In the aftermath of the indictment, there have been calls for Paxton’s resignation. It’s easy to understand why. As attorney general—the state’s top law enforcement official—Paxton heads one of the most important and vital agencies in Texas. It wouldn’t be surprising if Paxton steps down by the midpoint of his term: Greg Abbott, who spent twelve years as attorney general prior to becoming governor, would surely like to appoint a replacement, and the attorney general might see a chance to offer his resignation as part of a plea deal.

But the people of Texas have no real recourse here, nor do we necessarily deserve one. Republican voters could have taken the trouble to educate themselves about the basic characters of the candidates on offer; again, several of Paxton’s transgressions were known before the election. If Texans, especially Republicans, don’t want an alleged felon for attorney general, they should keep that in mind next time before they nominate and elect one. Meanwhile, Democrats may be enjoying some schadenfreude at Paxton’s expense, but they too are partly responsible for his election. If Democrats competed effectively in statewide races, if Republicans had any fear that nominating someone like Paxton might lose them a general election, then we might have avoided this embarrassment. As for the Texans who don’t vote—well, their own behavior tells us that their preferences don’t matter.

As it stands, there’s nothing that would force Paxton to step down. A Texas officeholder can continue to serve under indictment, and Paxton wouldn’t be the first attorney general to do so. Jim Mattox was elected attorney general in 1982, indicted in 1983, acquitted in 1985, and comfortably reelected in 1986, by voters who appreciated his instinct for combat. Why would things be different for Paxton? He is the product of a one-party political system that’s demonstrably troubled and that many Texans don’t seem especially motivated to change. It’s a truism that people get the officials they deserve. And Texas attorney general Ken Paxton is an indictment of us all.

A Tenuous Defense of Ken Paxton 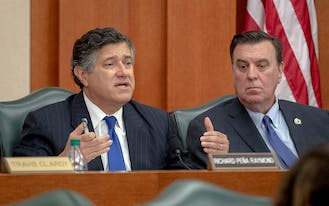 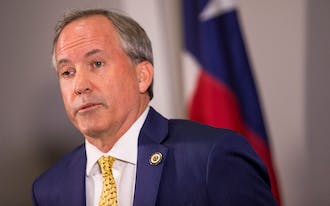