Texas Democrats suddenly face a crisis of conscience–the purity of principles versus the practical question of whether to support a centrist candidate in the primary who might, maybe, actually be able to defeat Republican Governor Greg Abbott in the fall.

Up until now, Democrats could dismiss centrist businessman Andrew White as a Republican lite, the son of a former governor who had been a teenager in the privileged world of the governor’s mansion. They could, in good faith, cast a ballot for former Dallas County Sheriff Lupe Valdez, a daughter of a migrant farmworker family. As a gay Latina, Valdez could bring diversity to the Democratic ticket and perhaps prompt Hispanics to vote. Besides, the race against Abbott is believed to be unwinnable, so vote your conscience.

That shattered this weekend when the Houston GLBT Political Caucus endorsed White over Valdez, and the Dallas Morning News also gave White the nod in an editorial that eviscerated Valdez’s knowledge of state government. The Houston Chronicle endorsed White as the candidate most likely to defeat Abbott, and named little-known Dallas investment banker Adrian Ocegueda as the newspaper’s second choice in the crowded Democratic field.

Valdez, the Chronicle wrote, “stumbled” in her interview with the paper’s editorial staff. That was kind compared to what her hometown newspaper said:

We had high hopes for former Dallas County Sheriff Lupe Valdez, the only candidate who’s held elective office, having been elected in 2004 and re-elected four times since, and someone we’ve supported locally at various times.  We were disappointed by her gross unfamiliarity with state issues, however, particularly an almost incoherent attempt to discuss state financing.

At one point, Valdez, 70, volunteered that she didn’t know whether the state was spending $8 million or $8 billion on border control. (It’s closer $800 million.) On college tuition, she first suggested the Legislature “and stakeholders” should set tuition rates, but then contradicted herself, and she later said the state should move to reduce local property tax rates, apparently unaware of those set by local jurisdictions.

Several weeks ago, I watched White and Valdez pitch themselves to the Texas AFL-CIO Committee on Political Education. White showed up prepared, while Valdez was vague in her speech and sounded more like a candidate for election as Dallas sheriff than as a potential governor. She dismissed her shortcomings by saying she was not a jack of all trades but could find experts to give her solutions to the state’s problems. White, on the other hand, went after Abbott for pandering to right-wingers in 2015 who thought a military exercise called Jade Helm was really a secret plot to establish martial law in Texas. “Greg Abbott, Dan Patrick, and the new Republican party—that’s what they are, a new Republican party,” White said. “They are all members of the Trump school of government, which means they are focused on the extreme fringe members of their primary while they forget about the rest of us.” The labor group backed Valdez, but it was clear to me that she was not ready as a candidate.

But Andrew White, who is trying to take the middle as a “common sense Democrat,” may be too conservative for the Texas Democratic Party. After almost two decades of statewide losses and dwindling primary election turnouts, the state party is left with a base electorate that is almost as intransigent as the tea party activists of the Republican Party primary.

His father–the late Governor Mark White–was a successful centrist. But the base Democratic primary vote in the 1980s was almost three times as big and much broader. When White’s father lost the Democratic nomination in 1990 to Ann Richards, almost 1.5 million Texans voted in the party primary. When the party gave the gubernatorial nomination to Wendy Davis in 2014, only 560,000 people voted, less than half of that year’s Republican primary turnout that nominated Abbott.

The Democrat who came closest to winning the governor’s office in recent decades was former Houston Mayor Bill White, a centrist who is no relation to Andrew White. In 2010, Bill White received 2.1 million votes, but still only reached 42 percent of the total turnout.

Moving to the left, Davis was famed for a filibuster opposing abortion restrictions and had national support. Whether it was due to voter misogyny or a poorly run campaign, Davis lost to Abbott by twenty percentage points in 2014 and received 270,000 fewer votes than Bill White. Those results showed that ideological purity can cost the party in down-ballot races, as well, as the voter drop-off contributed to Democratic losses like Kim Ogg’s failure to upset Republican Devon Anderson in for Harris County district attorney. (Ogg came back to win in 2016.)

Almost from the moment Andrew White announced his campaign for governor last year, he ran into trouble with Democratic women. In his personal stance on abortion, he supports women’s rights to control their own bodies but he personally believes efforts should be made to reduce the number of abortions in Texas. It was a stance similar to one Republican moderates took in Texas during the 1990s before religious fundamentalists ran them out of the party.

Like most Texans, my abortion views don’t fit into one word descriptions. “Us versus Them” works for football, but not women’s health. Let’s stop the game and start making progress. https://t.co/r7Q6zF9Smr https://t.co/vRV69JWN9e

Davis has unleashed on White through her Facebook account. “This thread from my friend Aimee Boone Cunningham says all we need to know about this anti-choice man asking for our support as the Democratic choice for governor. Uhh – no. Just no.” Cunningham, the former finance chair of the Texas Democratic Party on one occasion commented: “He is anti-choice. And trying to have it both ways, apparently. Don’t be fooled by the B.S., friends.” On another occasion, she chastised White for refusing to promise to veto any or all abortion legislation that reached his desk: “When you tell us that you would sign anti-choice bills that come to your desk, and THEN you’re all, you guys, why so mad? Who could have known ‘this one little issue’ would be important to anyone? And then you’re all, ‘no, you guys I’m going to be awesome on this!’ We don’t hear, ‘Hey! I was wrong, and thought my man brain should control women’s bodies, and now I realize that is trash!’ We hear: ‘You think women are not paying attention + don’t care + are easily deceived and have a limited ability to think about these things.’ NO, SATAN. NOT TODAY.”

Similarly, some questions were raised by the Houston Chronicle about White as an elder in the Presbyterian Church of America, which opposed same-sex marriage. “It’s a church-state issue and there is a separation in my mind,” White told the Houston Chronicle. “My personal faith is personal to me, but I will not let it interfere with how I govern.” White has been critical of Abbott for calling a special session to limit gender-based bathroom access. “I’ll promote human rights and equality for all Texans, no matter their color, race, gender, religion, sexual orientation, or gender identity. America stands for freedom. For all.”

White also has taken heat from the Dallas Morning News over a $2,500 donation he made to the Kentucky Republican Party in 2005. The explanation offered by his lawyer did not help the situation. Apparently, White made the donation in hopes of obtaining federal contracts for his company, Geovox Security Inc., which produces human heart-rate detectors for searching for people hiding in vehicles at high-security locations. It had the look of pay-to-play with Republicans.

Up until this weekend, White and Valdez have been the candidates most likely to win the Democratic nomination in a ten-candidate field. Based on social media chatter, Democratic activists had been leaning toward Valdez as the leading candidate most aligned with their views, but after the endorsements and and newspaper criticisms, some are questioning whether they should shift to White as the most viable candidate. Others want to stand firm with Valdez as the candidate most representative of their views on social policy such as abortion or same-sex marriage and say they will never vote for White. And some expressed fear that Valdez will become an embarrassment that drags down the entire Democratic ticket. State Representative Garnet Coleman, a Houston Democrat who is supporting White, told me he believes White is solid on Democratic issues and is not a Republican-lite. “His demeanor is very conservative, but his heart is very progressive,” Coleman said.

Many Democrats I have talked to rest their hopes on Beto O’Rourke’s challenge to Republican U.S. Senator Ted Cruz to shore up the party down-ballot. They also are hoping that feelings of animosity toward President Trump will drive voters to the polls, and even it this election does not create victories it may create momentum going into the 2020 presidential contest.

But in the political history of Texas, the focus is always on the governor’s race in off-year elections. Everyone remembers Ann Richards won in 1990, but few recall that Republican U.S. Senator Phil Gramm won re-election that year. At the moment, even if O’Rourke does well at the top of the ticket, the governor’s race looks like it might be where Democrats cast a vote before going home, leaving all the candidates below without the votes to overcome their Republican opponents.

Democrats are now faced with choosing between principles and pragmatic politics. 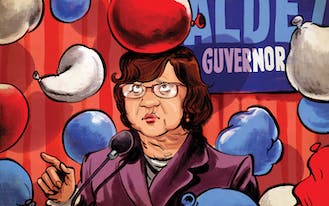 The 2019 Bum Steer Awards: Lupe Valdez, Who Was Woefully Unprepared to Run Against Governor Greg Abbott 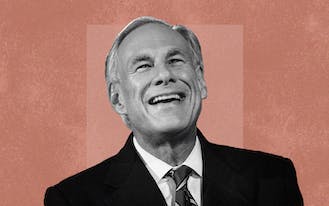 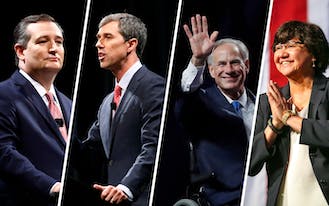 Election 2018: This Year’s Races to Watch 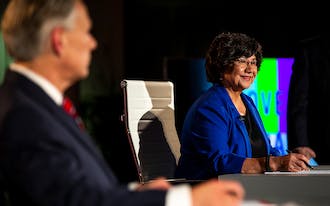