It took only a brief mention of public health during an online forum in late September to reveal the partisan influences at work in the officially nonpartisan mayoral election in Pearland, a fast-growing suburb south of Houston. When candidate Quentin Wiltz noted the value of contact tracing to help limit the spread of the novel coronavirus, online commenters pounced: “Contact tracing? WTH guy. No thanks,” wrote one observer. “You are OK with contact tracing typical democrat,” offered another, even though neither candidate had mentioned party affiliation. (Some Republicans around the country have objected to contact tracing—which seeks to locate those who have been in close proximity to others who’ve been infected, and encourage them to isolate—calling it intrusive government overreach.) While these and similar comments streamed in, the two contenders—Wiltz, a 40-year-old African American who works in the oil and gas industry, and Kevin Cole, a 56-year-old white real estate developer—continued talking about standard municipal issues such as flooding and traffic congestion.

The increasing polarization of the state and national electorate has been evident in local elections through several recent cycles, and party organizations are responding. The Republican party of Texas has provided more than $32,000 worth of printing and mailing services to Cole’s campaign, according to his most recent finance disclosure, and Wiltz has the support of the state Democratic party through an initiative called Project LIFT. But this year, the typically low turnout race for the part-time job of mayor has become intimately tied to the electoral fortunes of President Donald Trump and former vice president Joe Biden. In March, concern about the pandemic prompted the city council to move the election from its usual May date to November 3, when voters also will make choices for president and a U.S. Senate and House seat, strengthening the campaign’s partisan undercurrents.

Wiltz and Cole are competing to replace 95-year-old Mayor Tom Reid, who did not seek reelection this year after serving since 1978, except during a seven-year gap in the 1990s. Reid had presided over the kind of growth and demographic change that’s rippling through suburbs around the state and the country, and which Trump has made a key issue in his campaign.

For most of its 126 years, Pearland was a quiet town that took its name from its once abundant fruit trees. But it began growing rapidly in the 1970s. Its population expanded roughly tenfold during Reid’s tenure, to more than 120,000 today. According to 2019 Census estimates, non-Hispanic whites make up 44 percent of the population, while 22 percent are Hispanic and 18 percent are Black, up from 7 percent twenty years ago. The president in recent months has claimed that Democrats want to “demolish” suburban communities by encouraging more low-cost housing and failing to crack down on crime, part of what’s been characterized as a Trump strategy to provoke racist fears among white suburban supporters. 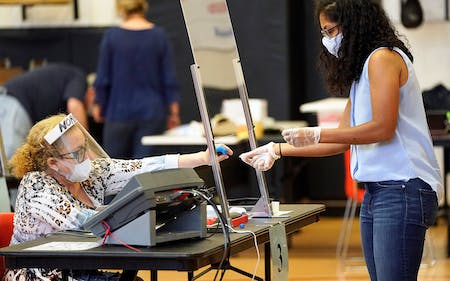 The widespread demographic shifts and the infiltration of partisan politics into municipal and school board campaigns in the suburbs are topics of keen interest across the political class. “The kind of dynamic change that’s going on in Pearland is what’s driving suburban politics around the state,” said Keir Murray, a Democratic consultant in Houston who is not involved in either mayoral campaign. “When the white share of the overall vote gets below a certain level, it gets harder these days for Republicans to win.” And because Trump is such a polarizing figure, Murray said, “it’s becoming difficult for the candidates to separate themselves from these national trends.”

A Wiltz victory that contributed to even moderate blue movement in surrounding Brazoria County would be significant, and likely attributable to demographic changes. The county has remained solidly in the GOP camp in recent elections. Its voters favored Trump over Clinton by 24 points in 2016 and 63 percent voted straight-ticket Republican in the 2018 midterms, even as nearby Fort Bend County turned blue. Analysts note that the population and voting electorate are distinct bodies. Indeed, while non-Hispanic whites make up less than half of Pearland’s population, they make up 55 percent of its registered voters, according to the Texas Democratic party voter file.

Comments suggesting discomfort with Pearland’s increasing diversity abound on social media. Some of Cole’s supporters have adopted slogans such as “Don’t Houston Our Pearland,” which Wiltz described in a recent NAACP forum as “coded messages” using the urban center as a proxy for the poor and people of color. Cole told me he has privately chided certain supporters for racially insensitive comments, and he expressed irritation that Wiltz did not face similar questions after a group supporting his 2017 candidacy used the hashtag #buildblackpoliticalpower. “What do you think the response would be if I posted ‘buildwhitepoliticalpower’?” he asked.

At the NAACP forum, both candidates publicly embraced the suburb’s growing diversity. Cole, who has apologized for a deleted 2017 Facebook post expressing his concern about a report on Muslims running for local office, acknowledged a “racial divide” in Pearland. “I want to be able to reach out to men and women who don’t look like me and get behind their eyes and have a very frank conversation,” he said. “I don’t want to patronize someone by saying, ‘I know how you feel,’ because I don’t. But I can learn.” Wiltz, meanwhile, took pains at the forum to distinguish between diversity and inclusion. Wiltz said that shortly after his family moved to the city in 2007, he saw a roadside sign promoting the Ku Klux Klan. “Does racism exist here in Pearland?” Wiltz asked. “It didn’t take the killing of George Floyd for me to understand that.”

The reference to Floyd carried particular resonance in Pearland because his remains are entombed in the local mausoleum where his mother’s body also lies. In June, Pearland residents watched the passage of a horse-drawn carriage bearing Floyd’s body to its final resting place.

For some partisans and analysts, anticipation of a Democratic wave in suburbs such as Pearland is tinged with a hint of fatalism born of prior disappointments, including Wiltz’s loss to Reid in the 2017 mayoral race. “When Quentin forced Reid into a runoff, we thought the wave is here, we’re about to break in,” said Mike Floyd, who demonstrated a precocious ability to navigate Pearland politics when he won a school board seat as an eighteen-year-old high school senior in 2017. (He is unrelated to George Floyd.) Yet the status quo prevailed that year as Reid won a final term and Dalia Kasseb, a pharmacist who would have been Pearland’s first Muslim elected official, lost a runoff for a council seat.

Republicans tend to turn out more reliably than Democrats in off-year elections like the one in Pearland in 2017, so one source of hope for Democrats this year is the surge of voters already turning out for early voting. Yet 2020 has upended conventional wisdom on so many fronts that even an enthusiastic Wiltz supporter like Mike Floyd is hesitant to predict the outcome: “It’s a crapshoot, really,” he said.