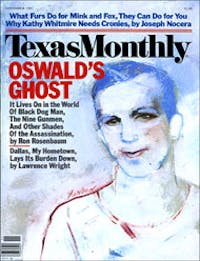 This November marks the twentieth anniversary of the assassination of President John Kennedy. Over the last two decades it has become one of the truisms of contemporary thinking that the assassination burst some seam in the American psyche, through which then flowed dissent, doubt, a breakdown of traditional respect for life and property, and a host of other ills. As the country searched for someone to blame for that terrible crime and its poisonous aftermath, the slight figure of Lee Harvey Oswald seemed hardly enough. Surely some powerful and insidious group — the military, the mob, the CIA, the Cubans — must have been responsible. Thus many single-minded individuals are, as Ron Rosenbaum’s story describes them, “Still on the Case”. Their deep obsessions, their conspiratorial cast, their sightings of ghosts in the alleys of New Orleans and Dallas, make their lives similar in many ways to that of their most elusive prey — Oswald himself.

After Oswald was murdered, the country’s bitterness toward Dallas and its people intensified. Lawrence Wright grew up in Dallas. He knew the city before the assassination. He knows what it meant to be from Dallas during the years when people everywhere were ready to blame the city for President Kennedy’s death. And he also knows how that legacy changed Dallas. His hometown is a very different place today from the Dallas of twenty years ago. What Dallas was and what it has become are the intertwined threads in “Why Do They Hate Us So Much?”