The biggest substantive debate of this year’s gubernatorial campaign came about as a result of the first bill that President Barack Obama signed into law. That would be the Lilly Ledbetter Fair Pay Act of 2009, a measure that expanded the window of time workers would have for filing claims if they believed that they had been the victims of illegal wage discrimination. It was, according to its supporters, a way to help address the persistent wage gap in the United States. In the intervening years, dozens of states have passed similar laws to align their statutes with federal standards. Texas, it won’t surprise you, is not among them.

In 2013 the Legislature passed an equal-pay bill authored by Senfronia Thompson, a Democratic state representative from Houston, only to see it vetoed by Governor Rick Perry. Wendy Davis, the Democratic gubernatorial nominee, sponsored the bill in the Senate, and she has raised the issue of equal pay many times on the campaign trail, suggesting that Perry’s veto of the bill had been part of a broader pattern of disdain for women’s rights among Texas’s Republican leaders, including Attorney General Greg Abbott, the Republican candidate for governor.

The issue caught fire on March 18, when the San Antonio Express-News reported that the female assistant attorneys general in Abbott’s office earn, on average, almost $6,000 less per year than their male counterparts. That figure, in itself, was not proof of gender-based pay discrimination, but it did give Democrats a timely piece of ammo, especially after Abbott, with some delay, finally clarified his position on the bill: if he had been governor, he would have vetoed it too. His reasoning, campaign spokesman Matt Hirsch explained, was that “wage discrimination is already against the law and [that] legal avenues already exist for victims of discrimination.” Even worse, a woman who attempted to defend Abbott on the issue—Cari Christman, the executive director of the newly formed RedState Women PAC—did little to counter the critics. “If you look at it, women are extremely busy,” she told WFAA.

On Monday Davis spoke about the issue in Austin, and her focus on it makes sense politically; this is the first time since the campaigns began that Abbott has been playing defense on a policy issue. In the resulting furor, however, a couple of points have been overlooked. There is a gender wage gap, but that doesn’t mean it is a result of direct wage discrimination, or that the bill would have mitigated the problem. And Republicans aren’t, as a group, against equal pay. Many of them, including Abbott, explicitly support it.

Let’s take those issues in order. Proponents of equal pay laws often summarize the gender pay gap by saying that where men earn a dollar, women earn just 77 cents. As the writer Hanna Rosin put it last year, this way of summarizing the issue “gives the impression that a man and a woman standing next to each other doing the same job for the same number of hours get paid different salaries.” The problem, she continued, is that’s not at all the case.

According to the Bureau of Labor Statistics, the median earnings for women who work full-time are just 77 percent of the median earnings for men who do the same. But a number of factors are at work here. Men are more likely to work continuously rather than taking time out of the labor force to care for young children, for example, and women are underrepresented in a number of highly paid industries.

Some of these dynamics are not preoccupations for Democrats in other contexts. In January, when the Congressional Budget Office reported that the implementation of the Affordable Care Act would provide a disincentive for certain hourly workers to continue working, the White House welcomed it as evidence that under the new law “individuals will be empowered to make choices about their lives and livelihoods,” including “choosing to spend more time with their families.” Men can certainly make that choice, but women are more likely to do so, and the net effect would be to exacerbate the wage gap. Setting that aside, when economists have studied the gender pay gap and controlled for correlated factors like years of experience, they have found a much narrower discrepancy than that jarring 77 percent figure that is typically cited in these contexts.

That being the case, if Democrats’ overarching goal is to narrow the wage gap, stronger wage discrimination laws are not the most effective approach. The Lilly Ledbetter Act protects only a specific subset of workers: those who have experienced direct wage discrimination but, like the woman for whom the law was named, have not realized that they were being paid unfairly within the 180-day window that federal and state law previously required. For the individual workers thus affected, the Lily Ledbetter Act, with its longer window for bringing such complaints, may prove to be an important protection. But there is no clear evidence that the federal law or the various state laws that were passed in its wake have made it easier for women (or other workers who have experienced illegal discrimination) to sue their employers for back wages successfully. The converse is also true. There is no clear evidence that the new federal law has encouraged frivolous lawsuits. An expansion of Texas’s equal pay protections may be a good idea. However, it would not have been a surefire way to improve wages for women across Texas.

The politics of the issue, too, have been overblown. Thompson’s bill was a priority for Democrats, but a number of Republicans supported it. In the Senate, where it passed by a 16–15 margin, the three Republicans who crossed over were Robert Duncan, Bob Deuell, and, perhaps most notably, the fiercely conservative freshman Donna Campbell. And it would be incorrect to say that any Republican who opposed the bill is therefore opposed to legal protections against wage discrimination. Many of the Republicans who opposed it actually did so on the basis that such legal protections already exist. In his veto proclamation, Perry noted that the bill “duplicates federal law, which already allows employees who feel they have been discriminated against through compensation to file a claim with the U.S. Equal Employment Opportunity Commission.”

In other words, Perry’s argument was that Texas workers can already file wage-discrimination claims in state courts, and that if they want to file a claim after the 180-day window allowed by state law, they can go directly to federal courts, a line of argument that was upheld by the Texas Supreme Court in 2012’s Prairie View v. Chatha. Abbott’s position is similar to Perry’s, although arguably more moderate. In his veto proclamation, the governor had also implied that although the federal law applies in Texas, he considers it too far-reaching. When I asked for clarification, the attorney general differed slightly. “Greg Abbott supports equal pay and supports the state and federal laws that already prohibit discrimination and give victims an avenue to seek redress in the courts,” said Hirsch in an email.

The disjunction between state and federal laws is confusing, and Democrats have argued that, in practice, filing a lawsuit in federal courts is harder and more expensive for the typical worker than doing so through the state system. And after a series of skirmishes in the long-running “war on women,” Texas Republicans are going to have a hard time making the case that they are a party with an unusually keen eye for women’s interests. If improving women’s economic outcomes is their key priority, though, Democrats need to suggest ideas beyond an expansion of equal pay protections. 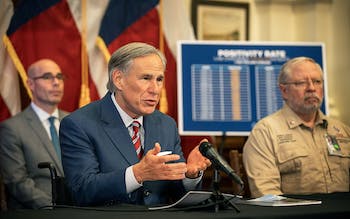