Call me a convert.

On my bleary-eyed, early-morning drive to Garrison Brothers’ Hill Country distillery, I was having a hard time imagining why bourbon bottling there is so popular. More than 16,000 people have their names in a lottery to volunteer for a dubious sounding opportunity: Two back-to-back, six-hour work days in an un-airconditioned Hill Country building, running a bourbon-dispensing, bottle-filling machine named Rosie, dipping full bourbon bottles in 300-degree wax, and carefully inventorying lots of six-bottle cases.

But by the end of the day, I was ready to sign up for any and all bottling days at Garrison Brothers, the Hye, Texas creator of award-winning premium bourbon and the fount of a community bound by kindness, strong values, and friendship—as well as hard work and bourbon.

My conversion started early, when a cheerful Garrison Brothers employee came by with an old communion tray, filled with communion cups brimming with Garrison bourbon. These “quality control” shots start before 9 a.m. and continue throughout the day, accompanied by toasts ranging from randy to sentimental. “Thank you for being here!” toasted master distiller Donnis Todd at mid-morning. “I’m tired of drinking with my own family! Salud!”

All day long, “John Daly” cocktails (one third lemonade, one third tea, one third bourbon) freely flow from a cold-drink dispenser, but no one ever seems to get completely drunk. There’s also help-yourself breakfast, beer, and non-alcoholic beverages, and a delicious lunch, freshly prepared by on-site chef Joseph Moreno and served in a breezy, barrel-filled rickhouse with gorgeous Texas Hill Country views. A boot-flask bottle of Garrison’s bourbon and GB swag is waiting for each volunteer at the end.

But the real draw?  It’s the “brotherhood of bourbon,” as identified by founder and self-titled “distiller, whiskey peddler, storyteller, and toilet scrubber” Dan Garrison. Alongside its premium spirits, the distillery offers authentic connection coupled with Texas hospitality and good times. That brotherhood keeps people flowing to the distillery, where they sign their names on the bottling room’s rustic walls from floor to ceiling and greet each other with easygoing humor.

“It’s so fun, and we love the camaraderie,” says veteran bottler Teresia Harwell, who regularly drives to Hye with her husband Rick from Granite Shoals.

I was lucky enough to join the line with the Local All Stars—a crew recruited from a special list of repeat volunteers that Garrison Brothers knows will show up and get the job done if another group cancels or when an extra-special bottling run is required.

Along with seven others stationed along a tall plywood table with regularly spaced Crock-pot size holes, I donned protective gear and dipped full, corked, upside-down fifths of bourbon into dangerously hot wax to create the smooth seal that embraces the cork and shoulders of every Garrison bottle. The process includes waiting time to allow excess wax to flow off the bottle, creating perfect moments to visit and joke with others on the line. 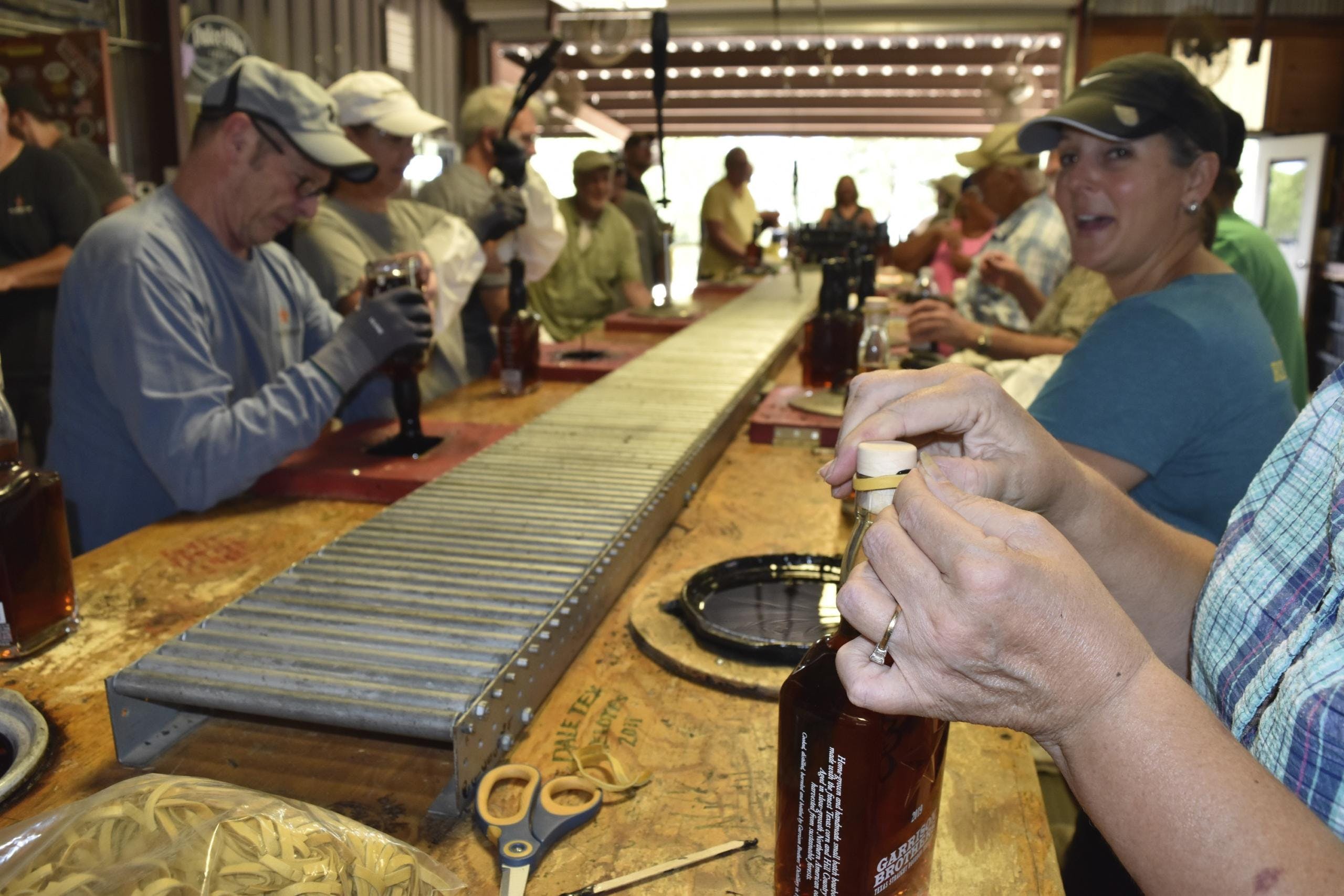 “It’s beautiful to see everyone here come together,” Todd says. “It’s like a 7th grade dance. Everyone starts out standing against the wall and by the end of the day, everyone’s laughing and exchanging phone numbers.”

Down the line from me, Garrison or Todd signed every…single…one of the hundreds of bottles finished that day, which happened to be when the 50,000th bottle for 2019 was filled and received a John Hancock. 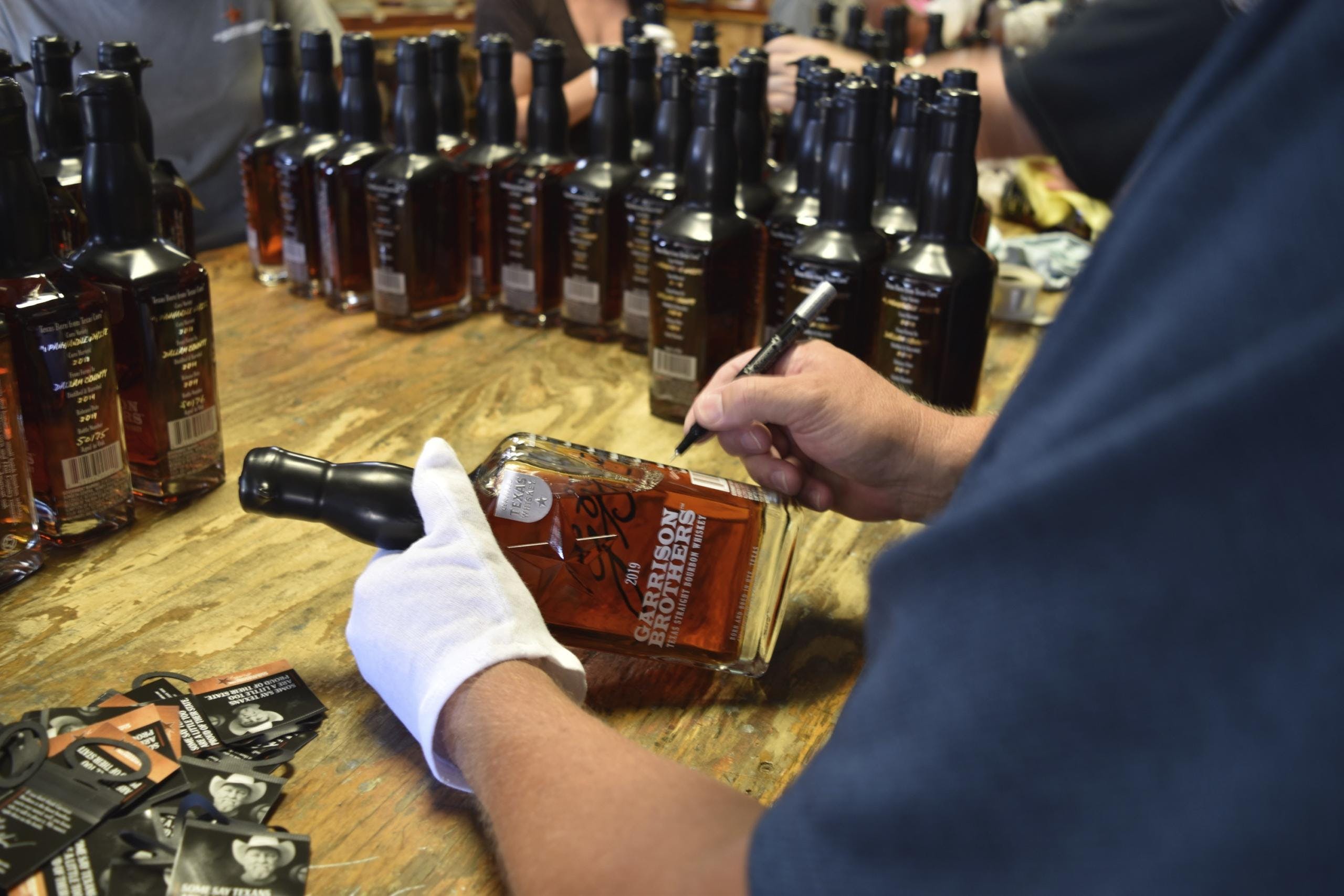 “Bottling is the most fun hardest work you’ve ever done,” says DeWayne Mangan, an information technology executive and member of the distillery’s Old 300 group, named after the original 300 European settlers in Texas. “And half the fun of bottling is listening to Dan tell stories all day. If Dan’s around that day signing bottles, you want to be down there (at his end of the table), polishing or boxing, just to hear story after story.”

Do you think your homemade whiskey cocktail can rival the pros? We’re giving you the chance to have your recipe highlighted at the Bourbon Brawl finals competition in Austin! The prize package also includes tickets to semi-finals and finals competition, lodging accommodations for the finals, and other Texas Monthly goodies. Click to enter. Happy mixing!

The Texas Conference: A Plan to Save College Football in Our State

UT Will Join the SEC; College Football in Texas Is in Chaos. Now What?