When James Moody, Jeff Trucksess and Dave Mead launched Rambler Sparkling Water in Austin in 2018, there was one clear line of sight: Unseat Topo Chico as the sparkling water of choice in Texas bars and restaurants.

Despite their unwavering support for local brands, Texans had claimed Topo Chico, a mineral water from Mexico, as their own. And Austinites, in particular, were evangelical about it. That was, until Topo sold to The Coca-Cola Company. 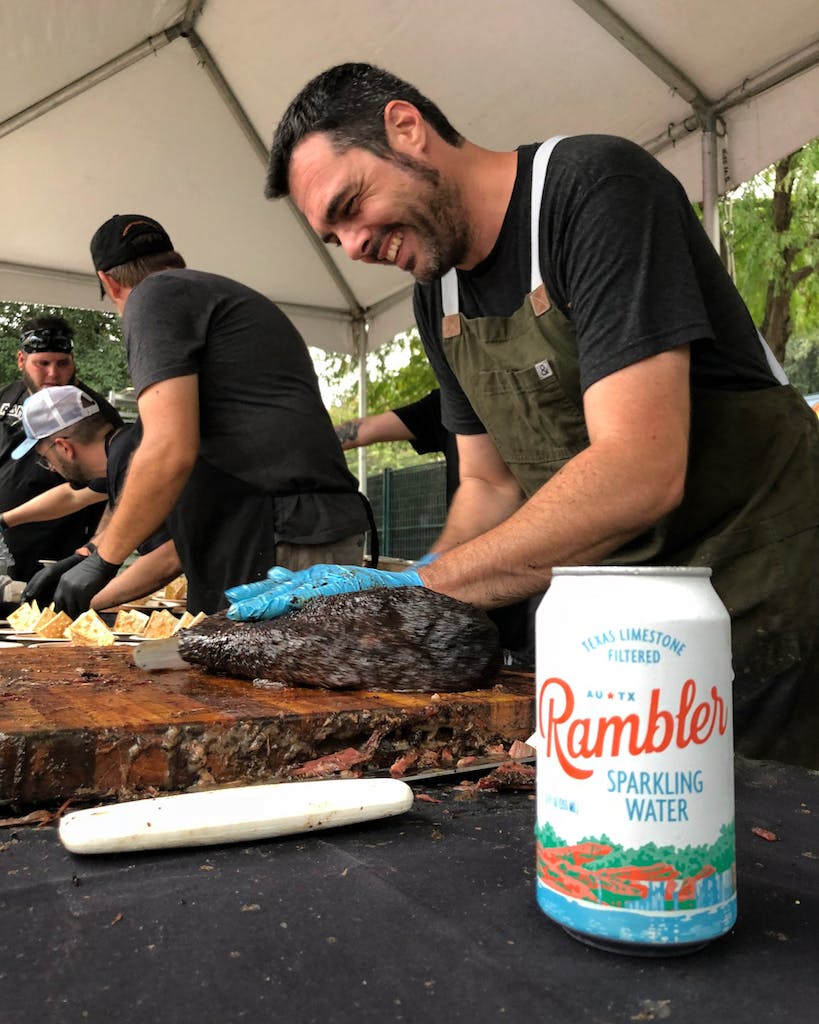 Hot Luck Food & Music Fest was the perfect opportunity for Rambler Sparkling Water to say, “Hello,” to Austin. Created by James Beard Award-winner Aaron Franklin, Hot Luck cooks up a “DIY casserole of the culinary and music world.” And that’s right where Rambler wanted to be. Alongside the best chefs and musicians from Texas and afar.

Ask Franklin about Rambler and he’ll gush about the mineral profile that gives the crisp water its unique taste. Officially the first to carry Rambler, Franklin will tell you it’s the perfect pairing with his world class Franklin Barbecue. Says Franklin, “Things I love:  things that sparkle, cans that fit into a cup holder, Texas State Parks and something clean to wash down the bbq!  Turns out, I love an ice cold Rambler.”

Sure, Rambler’s founders knew they’d eventually find a home at Austin’s favorite barbecue joints, taco stands and burger huts, but what they didn’t expect was to see Rambler immediately appearing on menus at some of Austin’s finest restaurants, like Olamaie — Michael Fojtasek’s award-winning modern Southern food restaurant, annually voted as one of Austin’s best. “At Olamaie, we look for products that are superior in quality, but also contribute to our community. We are proud to serve and drink Rambler not only because it’s delicious, but because we, too, love Texas Parks & Wildlife Foundation”, said Fojtasek. 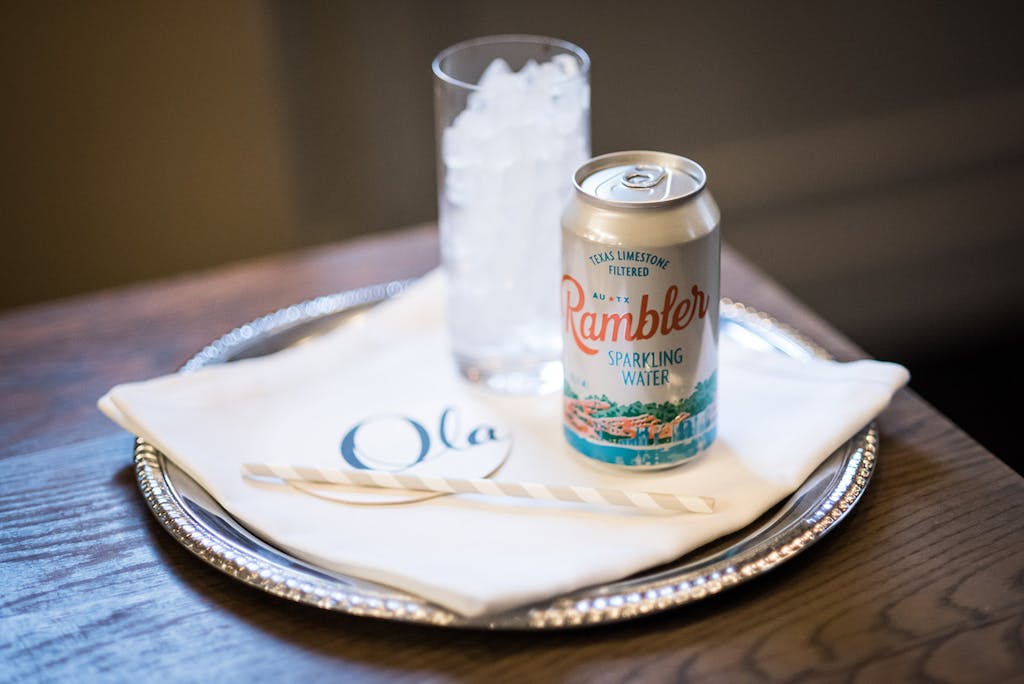 Texas sparkling water. In a can. At white tablecloth restaurants? Packaging in aluminum cans was an important environmental decision for Rambler. A decision the founders suspected might hold them back in certain upscale establishments where glass was considered the only acceptable drinking vessel. But the craft beer movement had paved the way and consumers were looking for environmentally conscientious products. Cans were cool again. But, really, it was the only choice given Rambler’s partnership with Texas Parks & Wildlife Foundation and the organization’s commitment to conservation.  Infinitely recyclable and easily stacked in coolers, Rambler was perfectly positioned for camping, hiking, boating … or just hanging by the pool.

It was official. Rambler had planted its flag in Austin. Available at local favorites like Franklin Barbecue, Better Half, Olamaie, Launderette, Dai Due, Swedish Hill, Tacodeli, and Lucy’s Fried Chicken, Rambler was becoming a staple.

And then the phone rang. It was Houston’s very own James Beard award-winning chef, Chris Shepherd. The Robb Reports’ “Best Chef in the World,” Chris Shepherd, owner and chef of Georgia James, One/Fifth, UB Preserv, and The Hay Merchant. The man behind Southern Smoke, the crisis relief organization helping people in the food and beverage industry that has raised and distributed over $6mm in funds since 2015. The unofficial Mayor of Houston. That Chris Shepherd. 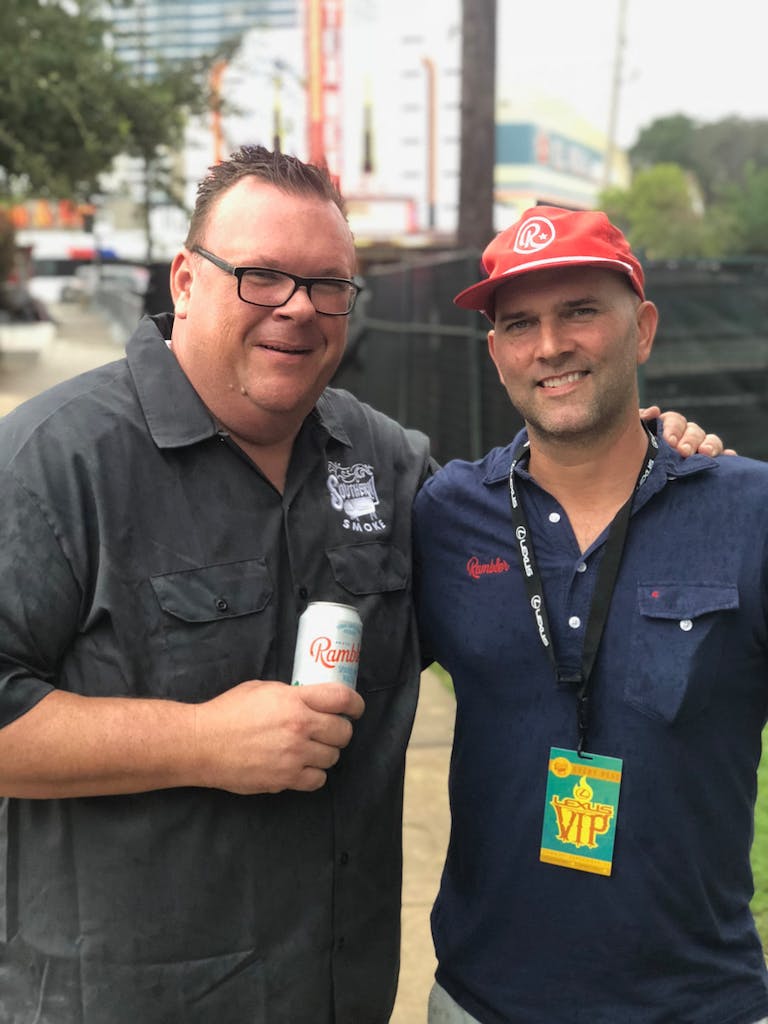 Shepherd was a legend not only in Texas, but world renowned. The beloved chef had discovered Rambler at Hot Luck and immediately wanted to add the Texas limestone-filtered sparkling water to his restaurants. “At our restaurants, we call Rambler a ‘Cold Fatty,’” said Chris Shepherd, chef/owner of Underbelly Hospitality and co-founder of the Southern Smoke Foundation. “We’re always having meetings and drinking ‘cold fatties’ because a) they’re delicious and b) offer just the right amount of bubbles. Our customers have become huge Rambler fans, too—many of them tasted Rambler for the first time at the Southern Smoke Festival. We’re so grateful to Rambler for supporting Southern Smoke, and we look forward to a long partnership.”

The Rambler team had quickly ventured outside of the Austin city limits. They were doing what they were born to do. Ramble.

Fast forward two years and Rambler was statewide in HEB, Central Market and Whole Foods, and picking up bar and restaurant accounts daily. Consumers were catching on.  And, then, Covid.

At the dawning of the pandemic, bars and restaurants had amounted to 50% of Rambler’s business. As stay-at-home orders were given and businesses began to shutter, on-premise sales plummeted. And grocery sales didn’t fare much better, given the nightmarish logistics of distribution and merchandising.

Rambler sprung into crisis mode. They did the only thing they knew to do – help serve the community by keeping Texans hydrated. Rambler immediately donated a truckload of water to the Central Texas Food Bank and began offering direct-to-consumer delivery. At cost, nationwide.  At the same time, Rambler made the decision to innovate with new packaging and new products. 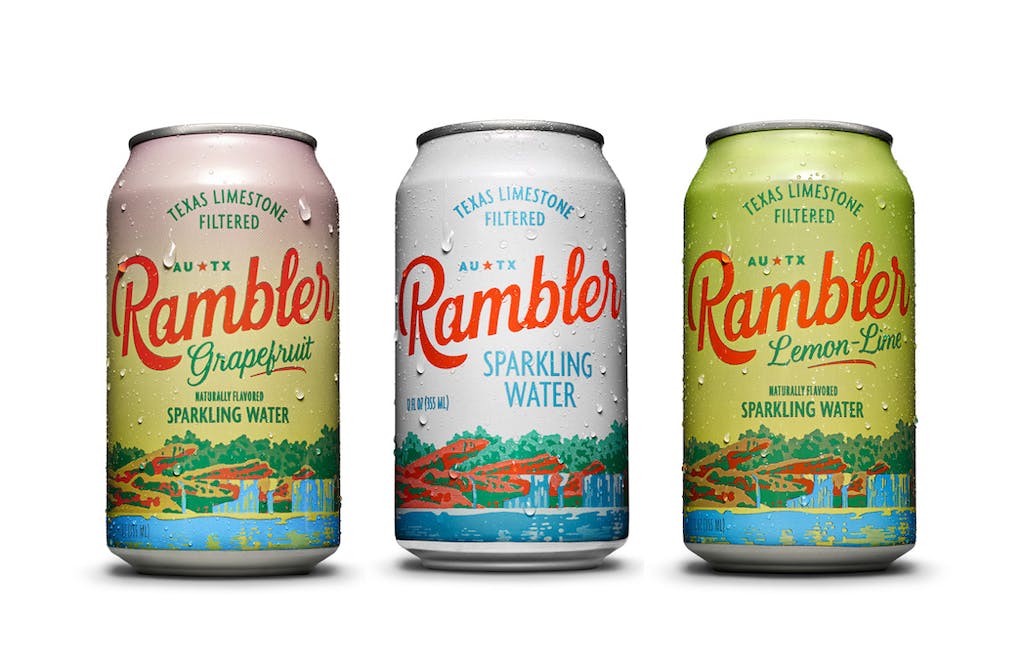 The company introduced 12-packs, plus two new flavors — Lemon-Lime and Grapefruit. Grocery distribution opened up, new stores were added and additional shelf space was given.  And now, Rambler’s back, and stronger than ever. Distribution has crossed state lines and the Taste of Texas is being shipped to all 50 states via Amazon.

Rambler continues to serve the community during the pandemic. In addition to supporting their conservation partners, Texas Parks & Wildlife Foundation and American Rivers, Rambler helps serve the Austin community and its restaurant partners with product donations and social support. Because Rambler will tell you that’s what being local is all about: Supporting friends and neighbors when they need it most.

Broadway’s Next Great Playwright Is a Texan