This article by Eric Morris is sponsored by Outdoor Annual advertisers in partnership with the Texas Parks and Wildlife Department. For more articles in this series, visit the Texas Outdoors Sponsored Section.

At Black Wolf Hunting Club, we host group hunting and fishing trips and events throughout the year to promote hunting and the outdoors to all.

Why the name Black Wolf ? Wolves are skilled hunters, renowned among nature’s top predators. A black wolf is a rarity among its hunting brothers.

Minorities do have an interest in hunting and the outdoors. Many want to learn how to hunt, shoot a bow, select the right hunting firearm or camp, but don’t see people like themselves in the media images of hunters. That can lead them to assume that hunting is something that minorities just don’t do.

We need to do something to change the prevailing attitudes and the status quo. After all, kids — like my hunting buddy, Jaylan — who hunt are less likely to be involved in other incidents involving firearms.

Jaylan and I are out at Proctor Lake, where most of the hunters have set their sights on the excellent deer. Jaylan, however, has always wanted a hog and has a chance today. Deer, what deer?

He reminds me of myself at that age. Like me, Jaylan’s obsessed with hunting and all things outdoors. Like me, he makes all sorts of traps and hunting apparatuses in preparation for his next day afield.

Just as some people are born with the natural ability to play instruments, draw or sing, some of us are born to be hunters.

A quiet hour passes, then Jaylan catches the sudden movement of a dozen hogs through the woods. They’re on us so fast, he doesn’t have time to raise his gun. With hogs standing a mere five yards away from the blind, Jaylan can only let them pass. It’s amazing how fast those little hog legs can move that barrel shaped body. Those hogs started running, and kept on running, right past the feeder and out of range. Jaylan sighs, and settles back to wait.

Ninety minutes later, as the last bit of shooting light (and hope) wanes, the silence of the woods is broken by raucous snorts, squeals and twig-crunching. As the hogs swarm nearby, an old gray-faced sow turns broadside.

Jaylan’s moment has come. He takes one shot. Then another. The second shot puts the hog down for good. At last, Jaylan has his hog. 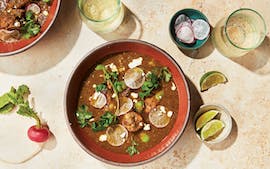