A great American hero, who nearly made the ultimate sacrifice, will be honored at AT&T Stadium at the Frontier Communications Iron Cowboy as part of PBR’s 2017 Celebrate America Tour, which salutes true local heroes at PBR events all season long.

Sgt. John Hyland of San Antonio, a U.S. Army scout who was blown up in Iraq, had 33 surgeries during his recovery, lost his leg, and earned a Purple Heart for his service in the Middle East.

Hyland also happens to be a big PBR fan, and a classical opera singer, which is where this particular story begins.

Growing up in Charlotte and eager to perform, Hyland enrolled in the North Carolina School of Art. A teacher sensed his potential, and he started singing opera. He joined the Piedmont Opera Company in the Carolinas, and performed arias at the Opera Festival di Roma in Italy. He was an understudy for “Phantom of the Opera” in New York.

But the opera life was a tough one. Those not named Pavarotti had best be prepared to take a second job.

Hyland returned to restaurant work in the southeast where he met a beautiful college girl. Erica and John were married and had two kids. He ran several Hooter’s restaurants, and in Washington, where seemingly all 48,000 law enforcement officers in Washington D.C. were his customers, Hyland befriended several members of the area’s police. Many men have experienced an epiphany in Hooters, but his was unique. Hyland wanted to become a cop.

He moved the brood back to Charlotte and joined a private police agency. The pay was terrible, the conditions dangerous. The job offered no health insurance.

He then met a veteran fresh out of the U.S. Army, who extolled the virtues of a military career.
Hyland, then 33, took the army entrance test and scored high enough to choose his path. He wanted to be a scout, an elite position performing reconnaissance, gathering intelligence on the enemy, and sometimes terminating them. 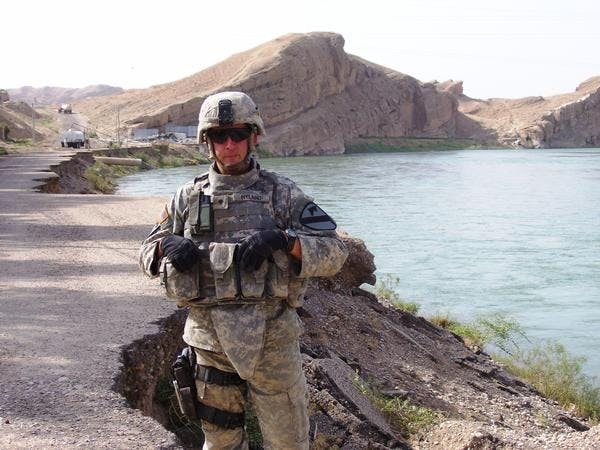 On September 11, 2007, Hyland was on a scouting mission 60 miles north east of Baghdad. He was in a Humvee sitting behind the driver, operating a sophisticated computerized tracking system and .50-caliber gun that could take off an insurgent’s head from 1,200 meters away.

Even though Hyland felt like he was playing a video game, sitting behind a vivid color computer screen with a joystick in his right hand, this was no routine mission by any definition.

A patrol bringing supplies to an Army outpost had already been hit. A Quick Response Force had been dispatched and promptly blown up. Hyland’s small reconnaissance squad was called on to secure the scene.

At least, that was the plan. The enemy had orchestrated a textbook set up.

The scouts were travelling over a small bridge when their vehicle ran over two anti-tank bombs attached to the bottom of the bridge, directly under Hyland. The massive explosion threw the Humvee’s 500-pound door 20 meters. Everything behind Hyland was gone. He found himself wrapped around the vehicle’s roll bar.

“What I remember was a thud,” Hyland said. “I can’t describe it, and hopefully no one will ever experience that sound. It was just a massive thud. Everything got quiet. Then I heard a high piercing ringing. I was shot up into the roll bar, holding on, and we were ambushed, shots going off all around us. The next thing I remember was a medic beside me, giving me shot after shot of morphine.”

Hyland had taped a photo of his wife and two boys onto the Humvee. Sprawled in the middle of the Godforsaken desert, he screamed for his buddies to get that picture. He didn’t want to suffer the indignity of terrorists finding it and disrespecting his family.

To his comrades, the dazed yet howling scout looked to be fine. He had all his limbs, and his only major wounds appeared to be a banged up, bleeding head and a fractured right leg.

But on the barren ground, no one could see the soldier’s serious internal injuries. Taking the brunt of a massive detonation, Hyland’s insides had literally imploded. Both his heels were badly shattered. His pelvis was broken in five places and separated from his spine. Both his shoulder blades were shattered. Three lower vertebrae were fractured. 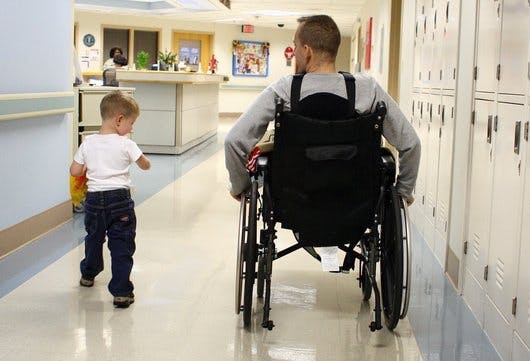 He was sent to Walter Reed Army Medical Center in Washington, D.C., then Brooke Army Hospital in San Antonio. He had 33 operations, including the placement large pins in his legs and several bolts as long as a finger to hold together his pelvis.

As he recuperated and began therapy in San Antonio in late 2007, Hyland was helped by a wounded warrior foundation called Soldiers’ Angels, which invited him to sing the anthem at a local rodeo.

“I didn’t grow up a cowboy, but PBR just grew on me,” he said. “In Texas, there’s a cowboy vibe – that’s what they do. There’s a rodeo here in San Antonio practically every weekend.”

The solider, who would re-enlist in a heartbeat if he could, respects how the PBR wears its unabashed patriotism loud and proud.

“PBR gets the patriotic vibe happening in this country,” he said “They understand what the flag means, and they’re not afraid if that upsets anyone.”

Hyland’s physical therapy will continue. When he stands for extended periods of time, he feels the sensation of daggers thrust into his heels. Walking can be a challenge. Chronic pain haunts him. There may be more surgeries ahead. He refuses to feel sorry for himself.

“I believe there’s a silver lining to everything,” he said. “Events in our lives happen for a reason. After getting hurt, I got a do-over. Not many people get the chance to press the re-set button and do what you really want to do.”