The approach to Shell Island is one of splendor, particularly if you’re a passenger on the first boat of the day to arrive to a near-empty paradise: Tepid emerald water laps up on the sugar-white sand like a metronome, flocks of curious shorebirds perched on the crooked pier jetting out into the lagoon serve as your curious, albeit friendly welcome committee. It’s rare to have an entire island to yourself, but such is the charm of this uninhabited Panama City Beach locale.

Of all the spits of sand in Florida, Shell Island is one of the most cherished, by locals, long-time visitors and first-timers alike. The 700-acre barrier island stretches nearly seven miles between the St. Andrews Bay and the Gulf of Mexico and is a welcome retreat from the throngs of tourists who populate the Panhandle beaches in warmer months. Rugged dunes provide shelter and privacy, though typically the weather is so mild year-round that winds aren’t of any concern. 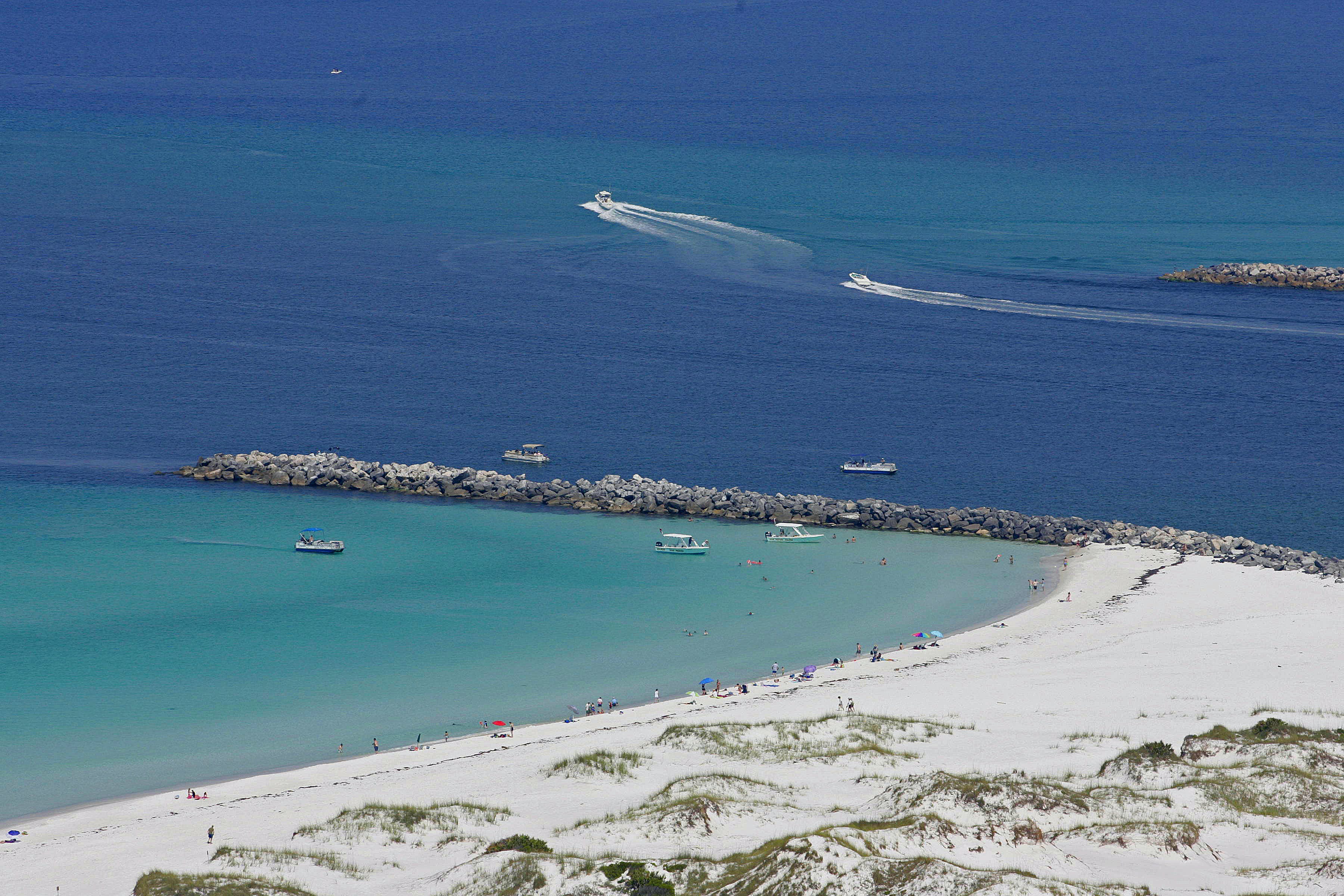 Though it’s historically not an island—Shell Island was, in fact, a peninsula originally and is currently a natural preserve; half of it is part of St. Andrews State Park and the other half belongs to Tyndall Air Force Base, as does nearby Crooked Island—shifting sands and human involvement have altered its topography and purpose. Originally known as Lands End Peninsula, Shell Island was populated by Native Americans centuries ago; they combed the abundant waters for shellfish to eat and lived off the rich bounty of the land. In the 1930s, the Army Corps of Engineers dredged the waters to develop a shipping channel and establish a more direct shipping lane between Port Panama City and the Gulf of Mexico, earning Shell Island its current designation.

Shorebirds, ghost crabs, starfish, piping plovers, seagulls and myriad other species call Shell Island home; have your camera ready and observe—and respect—the wildlife habitats from a safe distance. Loggerhead and green sea turtles rove these waters, so keep your eyes peeled for heads bobbing on the surface on the horizon.

Despite its remote locale, getting to Shell Island isn’t as difficult as you may think. There’s a daily shuttle ($19.95 for adults, $10.95 for children) that departs from St. Andrews State Park every half hour from 9am to 5pm in the summer, and 10am to 4pm in the off-season, allowing the flexibility to pop over for an hour or two or stay all day—which we highly recommend—if you prefer. Shell Island Shuttle also offers snorkeling packages and kayak rentals for the active travelers who want to do more upon arrival than lazing about on a perfect beach.

For the ultimate Shell Island experience, charter your own mode of transportation via Lagoon Pontoons, which boasts a fleet of new 12-passenger, 24-foot boats and the option to choose between 60 HP and 90 HP, the latter of which will get you out to Shell Island in 10 minutes flat—though the journey and wildlife sightings are part of the draw of this memorable day trip. Lagoon Pontoons even rents out double-decker boats with slides off the back, perfect for families with small kids (or adults who want to relive their youth). 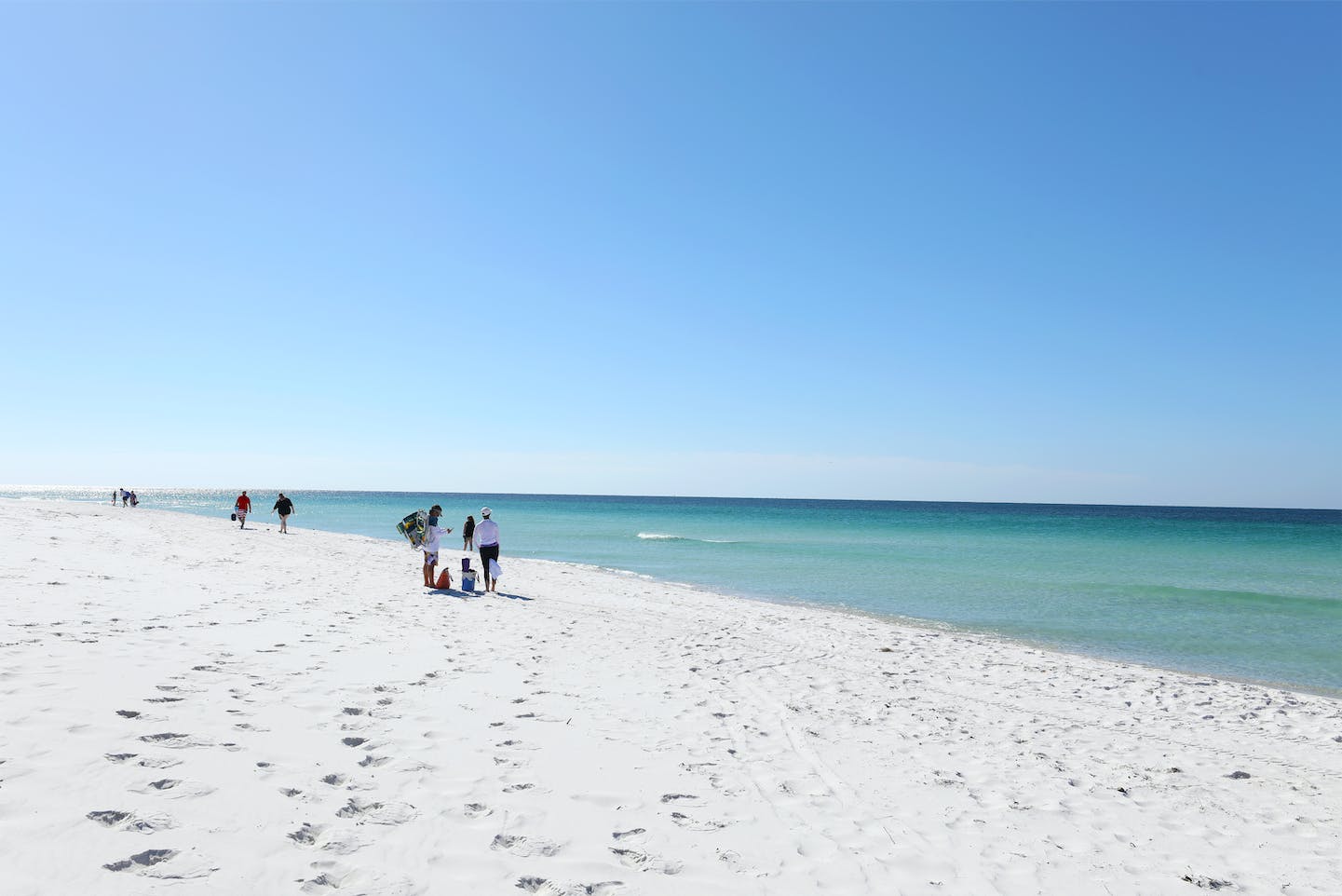 Wild dolphins populate the warm waters of the gulf surrounding Panama City Beach, and it’s not uncommon to see a playful pod frolicking in your wake as you speed to your destination. The flexibility of chartering your own ride means you’ll be able to stop and mingle as the dolphins emerge.

By mid-afternoon, the lagoon is bobbing with boats who dock right up aside the beach, their inhabitants spilling out onto the soft sand and posting up on loungers and beach chairs and beneath rainbow-colored umbrellas. Dog owners, in particular, love Shell Island, as it’s one of two public beaches in Bay County that allow canines to accompany their owners.

The bay waters are shallow and clear, making them prime territory for exploring what’s beneath the surface, so pack a mask and snorkel and go for a swim.

The state park-owned land has no facilities—such is the beauty of this uninhabited island—so take what you need, and leave no trace of your visit behind. There aren’t restrooms, nor is there a shop to purchase amenities—though in peak season, from Memorial Day to Labor Day, there’s a lone concessions boat that sells snacks and basics—so pack what you need to enjoy the day, and be sure and have shade by way of a covered boat or umbrella to shield yourself from the sun’s powerful rays.