A glass of an agua fresca makes summer tolerable—and joyful. The water-based fresh fruit and produce drink (literally “fresh water”) is an oft-overlooked component of the menus at taquerias or small Mexican restaurants. They’re the colored concoctions immortalized on social media and in fine art, such as Eduardo Pingret’s 1852 painting Vendedora de aguas frescas, and today served from those plastic barrel-shaped containers with ladles hanging from their rims. On sight, a batch might appear to be juice or Kool-Aid, but the difference is in the details. In aguas frescas the fruit (watermelon is a go-to) or vegetables (cucumber is popular) are blended or compressed into the liquid (be it the more traditional water or, occasionally, milk) and then mixed with sugar. The process produces a light, refreshing beverage imbued with the flavor and the color of the ingredients and available in nearly limitless combinations. Aguas frescas cool you down and rejuvenate you, and are perfect with a warm, rich, salsa-dripping taco.

Though plenty of restaurants serve fresh aguas frescas, many have come to rely on industrially produced flavored powders for their aguas frescas. It’s an easy shortcut that reduces labor. Thankfully, other businesses stay true to the tradition, and some are even reviving the drinks with creative twists.

Among them are taco trucks like Tejas Birria in Buda, where aguas frescas are a weekends-only treat. “It allows for just the right amount of ripeness,” says co-owner Alex Hernadez, whose wife, Mary, is responsible for the beverages. In Houston, Aguas Frescas El Oasis co-owner Dante Ovalle, a Monterrey, Mexico, native, was operating two tacos trucks in 2019, when he began offering an agua fresca based on a family recipe. Customer demand led to a lineup of flavors, lime and watermelon among them. The drinks’ popularity became so overwhelming that Ovalle saw a new opportunity. He approached his friend Johnny Herrera with a proposition: Ovalle would close the trucks to focus on sixteen-ounce bottles of aguas frescas sold at retail. Herrera would be Ovalle’s business partner in the venture. Herrera signed on the next day. That was a year ago. “It just exploded and got out of control pretty fast,” Ovalle says of the rapid growth.

Although Ovalle does give some credit to his previous career as a buyer in logistics for a produce company, he says the hands-on, natural, small-batch approach is vital to the success of Aguas Frescas El Oasis. Like the taco, aguas frescas are approachable and familiar to Texans. “It’s multicultural,” Ovalle says. “But it’s also something that can remind you of your grandma. When you take a sip, you get that authentic [aguas frescas] taste.”

Flavors can get complicated, with creative combinations, but they don’t have to be. A recipe can be as simple and quick as squeezing a bunch of limes into water. It’s that easy and that refreshing. This one Ovalle shares is exactly that: simple and refreshing. 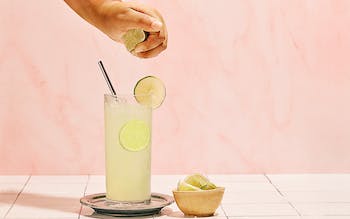 This cooling, rejuvenating summer drink is made up of four ingredients that you already have at home: water, lime juice, ice, and sugar.
Print Share