“Our food is simple, good, and celebratory with a South by Southwest or Southwest by South sensibility,” writes Tom Perini in Perini Ranch Steakhouse: Stories and Recipes for Real Texas Food (Comanche Moon Publishing), which came out in November. Perini, along with his wife Lisa, is the proprietor of the James Beard Award–winning Perini Ranch Steakhouse, in tiny Buffalo Gap, outside Abilene. Under normal circumstances, the Perini Ranch is a destination restaurant; because of its remote location, it even has guest houses where diners can spend the night. It’s a place for special occasions like anniversaries and birthdays.

But this spring, meals—even the special ones—have all had to be enjoyed at home. Thankfully, the recipes in Perini Ranch Steakhouse, written with noted cookbook author Cheryl Alters Jamison, provide the same kind of dressed-up Texas comfort food diners enjoy at the restaurant. A lengthy “Cocktail Hour” chapter is welcome in trying times, and this one has as many snacks as cocktails. And, of course, there’s an entire chapter on beef, with several recipes for steaks, prime rib, mesquite-smoked brisket, and more. This is a cookbook for those who want the comfort of familiar flavors with restaurant flourishes. Its recipes are a balm: simple, good, and celebratory.

Many of the dishes are standards: nachos, fried shrimp, chili, banana pudding. But Perini Ranch, which opened in 1983, was a farm-to-table restaurant before that term was invented; it grows much of its produce on-site. Sides (like Bourbon Glazed Carrots, Roasted Corn and Poblano Pudding, and Yellow Squash Casserole) and desserts all take inspiration from the ranch’s garden, and there’s plenty here that veers toward seasonal cooking, in unexpected and delightful ways, like a whole chapter of salads that go way beyond your standard steakhouse options: green beans with walnut and feta, watermelon and pecans with jalapeño vinaigrette, zucchini carpaccio. Or try the Black Bean and Roasted Corn Salad. Write the Perinis: “When you need a salad that won’t wilt in a steamy Texas July, this one is always a good bet. It can also be served as a salsa with tortillas or chips, or as an eye-catching topper for grilled chicken breasts. At the Steakhouse, we grill-roast in-season fresh ears of corn, then cut off the kernels and freeze them for use throughout the year.” 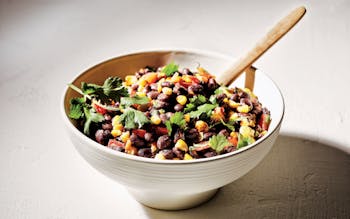