Welcome to In Season, our series celebrating the juiciest fruit and crispest veggies in Texas. This fall, we asked local chefs to share stories about their favorite items of seasonal produce—and to create original recipes that make the most of autumn’s bounty.

Sarah Flores and Sabrina Lozano grew up eating calabaza con pollo, a warming blend of chicken and squash perfect for those days in Texas when temperatures (finally!) begin to drop.

The sisters, who own and operate Loli’s Streatery food truck, in Corpus Christi, wanted to make a dish that plays off the staple while incorporating their own playful spin on things. That’s their ethos for all the food they serve at their truck, such as crispy waffle fries topped with queso and a loaded roasted corn bowl with slow-cooked brisket.

“We wanted to do calabaza con pollo, but on nachos,” Flores says. “And then we started thinking about all the different kinds of squash that are out there.” The women landed on tromboncino and delicata squash for the dish.

“For the squash selection, we met with a local farm,” Flores says. “They discussed with us that while the tromboncino is typically a nationwide summer squash, local Texan farmers are able to grow the squash to a higher standard in the winter, due to a late frosting period.”

While gravy isn’t a traditional nacho topping, it further adds to the sustaining nature of this dish. It’s as fun to make as it is to eat—just make sure you have plenty of napkins handy. 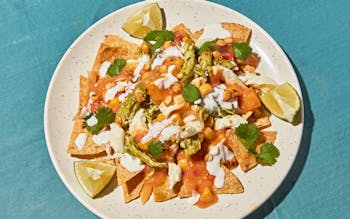 For the calabaza gravy:

For the chicken chile verde:

For the roasted delicata seeds:

For the calabaza gravy:

For the chicken chile verde:

For the roasted delicata seeds:

*Zucchini and yellow squash are acceptable alternatives for tromboncino and delicata squash.
Comment and Review