The first carne guisada I ever encountered was from a fast-food restaurant, a fact that I’d be hesitant to admit if the restaurant hadn’t been Texas’s beloved San Antonio–born Taco Cabana. The flamingo-hued eatery served me a more than respectable guisada taco, the nuggets of tender, spicy beef tucked into a fluffy flour tortilla and showered with skinny shreds of half-melted yellow cheese. It got me to wondering what else the world had been holding out on me.

Carne guisada is literally “meat stew,” some version of which can be found in every cuisine. But what a stew it is, its meaty broth thickened with roux and animated with a magical mix of dried chiles, garlic, cumin, and black pepper. It was never part of the revolving Tex-Mex repertoire of picadillo, cheese enchiladas, and beef tacos that delighted my family over the years. But then I made it during the holidays, surrounded by said kinfolk, who with margarita-fueled enthusiasm generously kept me company, “helped” me cook (“What the heck is Mexican oregano?” “You’re going to seed those chiles, right?”), and, over the next few days, ate every last bit of it—all by itself, mixed with eggs, atop fresh-made grits, and, of course, wrapped in fluffy flour tortillas and showered with yellow cheese. 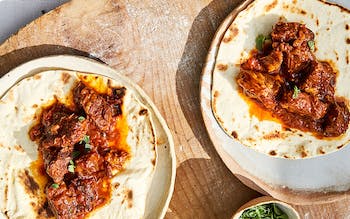 *In a spice grinder, combine 3 peeled garlic cloves, 1½ teaspoons cumin seeds, and 1¼ teaspoons peppercorns, along with 1 tablespoon water. Process into a smooth paste.
Comment and Review
From the February 2017 Issue Subscribe