Bust out the Dutch ovens: it’s getting “chili” in Texas. The origins of the robust dish Texans fervently claim as their own are, as food writers are wont to say, lost to history. But Frank X. Tolbert, in his 1953 treatise on Texas chili, A Bowl of Red, made a pretty good case for San Antonio as the birthplace of the ruddy, lustrous, peppery pot of meat we’re so fond of. So did the Sixty-fifth Legislature, which anointed it our official dish in 1977, boldly declaring that “Texans continue today the tradition begun in San Antonio 140 years ago of making the best and only authentic concoction of this piquant delicacy.” No doubt chili’s connection to Texas is deep and indisputable, from Gebhardt to Wolf brand, from the late-nineteenth-century “chili queens” of the Alamo City’s downtown plazas to the modern-day maestros of the Terlingua cookoffs.

But don’t look for a united Texan front when it comes to defining “authentic” (except for a near universal, almost hysterical aversion to the inclusion of beans). I lack the fortitude to wade into the murky depths of secret formulas and verboten ingredients and therefore align myself with the author of this recipe, Terry Thompson-Anderson, who reasonably suggests that perhaps “the rivalry and the controversy make for dozens of equally fabulous bowls of chili.”

This article originally appeared in the December 2015 issue of  Texas Monthly with the headline “Chili.” 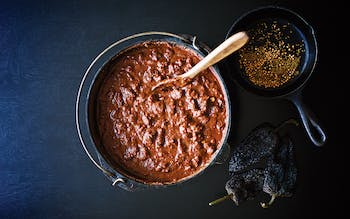 The Only Texas Chili Recipe You’ll Ever Need

Adapted from Texas on the Table, by Terry Thompson-Anderson. Published by the University of Texas Press.
Comment and Review
From the December 2015 Issue Subscribe