Chef Chris Shepherd’s first cookbook serves as the James Beard Award winner’s loving tribute to the vast, sprawling diversity of Houston’s restaurants. Cook Like a Local: Flavors That Can Change How You Cook and See the World (Clarkson Potter), which came out last fall and was coauthored by food writer Kaitlyn Goalen, focuses on his own recipes as well as those from restaurants across the city, resulting in a work that feels at the same time incredibly personal and representative of Houston as a whole.

Throughout the book, Shepherd shares stories about opening (and closing) his first restaurant, the highly regarded Underbelly; eating his way through Houston’s Chinatown; and traveling the world in search of good food. Fans of his restaurants (he currently has four: UB Preserv, Georgia James, One Fifth Mediterranean, and the Hay Merchant) will be pleased to see recipes for UB Preserv’s pickles, the Hay Merchant’s pozole, and his signature braised goat and dumplings. He also includes recipes and profiles from favorite Houston restaurants like Saigon Pagolac, Asia Market, Kong Ju Rice Bakery, London Sizzler, Mala Sichuan Bistro, and more.

Cook Like a Local is divided into six chapters, each focused on a staple of Houston cooking: fish sauce, chiles, soy, rice, spices, and corn. The chapters begin with a primer on the focus ingredients, outlining their origins, how they’re used, and by whom. The recipes that follow elaborate on the versatility of each ingredient; for example, the chiles chapter includes recipes for Sichuan spicy cucumbers, Thai papaya salad, Indian-inspired “puffy tacos,” Italian cauliflower agrodolce, Korean stuffed peppers, Vietnamese crawfish boil, and more. This is the perfect book for those who are dearly missing Houston restaurants and could use some international inspiration for their pantry cooking.

One standout recipe is Vinegar Pie, which Shepherd says was the most popular dessert at Underbelly. He writes: “It’s based on an old Appalachian recipe, modeled after a chess pie. Vinegar stood in for citrus, which was historically expensive and out of reach for the Southern farming class. In this way, it reminds me of so many of the immigrant recipes that I love, where culinary substitutions and adaptations are a necessity to approximate the flavors of home with different ingredients and equipment.” 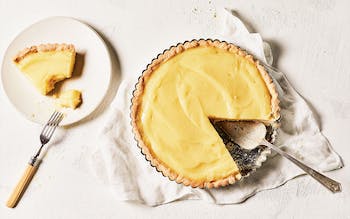 This favorite dessert from the Houston chef’s Underbelly days is based on an Appalachian recipe modeled after a chess pie.
Print Share