The consumption of eggnog is as integral to the holidays as cold weather and retail overload. In some families, graduation from “virgin” to “spiked” nog is a rite of passage, and recipes are a closely guarded secret, passed down through the generations with ritual flourish.

Eggnog, or something like it, has been around since the earliest days of the American colonial experiment. Though the etymology is uncertain, the drink is likely descended from the posset, a medieval beverage of dubious medicinal quality that was made from warmed milk spiced and curdled with wine or ale. By the eighteenth century the term “eggnog” was in common use, and by the nineteenth century the drink was a part of the mixological canon.

As ubiquitous as eggnog may be, people rarely drink the homemade stuff anymore, which is unfortunate given the ease of making it from scratch. The carton of commercial eggnog may look nostalgic, but a peek at the ingredients reveals that it is a product of modern food science, with its flavorizers, stabilizers, and emulsifiers—a far cry from the simple beverage that warmed the hearts of our ancestors. Only cream, sugar, eggs, and nutmeg are needed. And the booze, of course. Though originally made with rum, brandy, or fortified wine, it would be remiss not to include a little bourbon if you’re in the South.

At Bohanan’s, no culinary matter is undertaken without serious consideration, and the eggnog is no exception. Bourbon and aged rum are seasoned with pimento dram (an allspice liqueur) and a dash of pumpkin bitters, which chef Heather Nañez makes in-house. Then cream and fresh eggs enter the picture, resulting in a thick, boozy concoction that will make you believe in the divine, regardless of your affiliation. 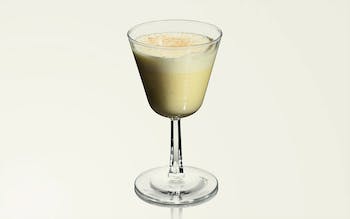