Andrea Meyer didn’t grow up plucking tomatoes from dew-covered vines in her neighbor’s front yard. There were no afternoons spent scrubbing dirt from beneath her fingernails following a morning of tugging radishes from damp soil. The pastry chef was raised in downtown Cleveland, where all of the fruits and veggies she gobbled were purchased from a grocery store. “It’s not like we had Texas peaches,” says Meyer, who now lives in Dallas. “We didn’t have a thing that grows.” But one day she discovered a bit of horticultural magic sprouting in her fenced-in backyard. Behind an unkempt plum tree, there was a nook that backed up to her house, and in that nook, she came upon thickets of wild mint. “I’m sure at some point my mom probably had a mint plant,” she says. “Mint is invasive. It will trail out of its container and go into the ground and just spread.” She recalls days spent pulling leaves from their stems and then rubbing them between her fingers. Sometimes she chewed on them. “I remember being totally fascinated by it,” she says. “I grew up in the city, so I never saw anything like this growing unless it was corn. I thought it was the coolest thing.” To this day, a waft of fresh mint carries her back to those spring days in Ohio.

The aromatic spring herb is often featured on the menu at Bisous Bisous Pâtisserie, Meyer’s Dallas bakery that specializes in French-style pastries. “We’ve done a bunch of stuff with mint because it’s so versatile,” Meyer says. “People tend to associate it with Christmas, but that’s peppermint. This is more of a fresh mint. We pair it with blackberry a lot.”

The chef’s mint blackberry éclair might take more skill—and patience—than the average home cook is willing to exert on any given day, so Meyer opted to share a less challenging delight: fresh mint panna cotta. “If you can cook with Jell-O, you can handle this recipe,” she says.

A rich and refreshing dessert, this creamy creation unfolds with just five ingredients and a few simple steps. And it doesn’t require much time by the stove, which can be favorable as we approach warmer months. Cool off as you indulge in this fragrant panna cotta. 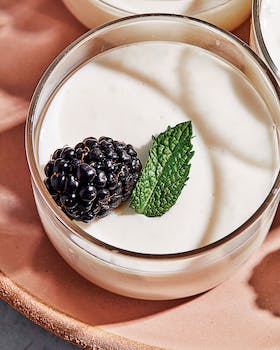 This light, fresh springtime dessert is sophisticated enough to impress any dinner-party guest, but it comes together with a foolproof four-step recipe.
Servings 4
Print Share