Breakfast tacos are the ultimate convenience food. There’s nothing better than a fresh-made taco on the go, and if you aren’t near a taco truck or favorite restaurant, there’s always the prewrapped option from a gas station or coffee shop.

But maybe you don’t want to leave the house. Or maybe, like me, you just don’t live in Texas anymore. (Sad but true: there are entire American cities and states in which the breakfast taco simply can’t be found—and even when you find one, well . . . ).

There’s nothing I like more than making migas entirely from scratch, or roasting up a sheet pan of perfectly crisp and pillowy potatoes. Sometimes, though, I want a breakfast taco in five minutes.

The solution is this make-ahead, ready-to-reheat-and-eat “tortilla breakfast taco.” It’s a tortilla (in the Spanish sense) inside a tortilla (in the Tex-Mex sense). Truthfully, this bacon, egg, and leftover french fry filling is not much like the Spanish egg, potato, and olive oil concoction. It’s really a frittata, and not far from a crustless quiche. But it’s more fun to call something a “tortilla taco” than a “frittata taco” (and “quiche taco” would be even worse). It reminds me of the bacon, egg, and potato taco at Guero’s in South Austin, where the three ingredients were always cooked together like an omelet—the diced bacon crisp, the potatoes always tender, and, yes, the eggs a little overcooked.

You start this dish on the stovetop, finish it in the oven, and end up with little triangles of premade breakfast taco filling, ready to reheat and stuff in a tortilla at any time, with whatever garnishes and salsas you desire. Of course, you’ll want to eat it all immediately, but I recommend saving the rest for tomorrow’s breakfast. 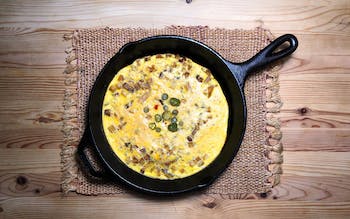 You’ll always have a bacon, egg, and potato taco at the ready with this make-ahead shortcut.
Servings 4 tacos, depending on tortilla size.
Print Share

You can adapt this to just about any favorite breakfast taco filling, or to make use of whatever ingredients or leftovers you have on hand. Substitute chorizo, ham, or breakfast sausage for the bacon, add refried beans directly to the filling, or go fully vegetarian with rajas, cooked greens, or meat alternatives.
Comment and Review