Cucumbers are touted for their refreshing qualities and make an ideal summertime addition to cocktails and meals. The fruit (yes, cucumber is technically a fruit) has been cultivated for thousands of years and is a warm-season crop. Cucumbers require sun to grow, and lots of it, so you’ll find them popping up in Texas once the last frost has passed.

“We use a lot of cucumbers in Malaysian cuisine,” says Alex Au-Yeung, chef of Phat Eatery in Katy, about thirty miles west of Houston. He uses cucumber as a garnish atop chicken, as a side with chicken and beef satay, and as a base for salads.

“I grew up in Hong Kong,” Au-Yeung says. “It’s a subtropical climate and I ate quite a bit of cucumber—there are all different kinds of cucumbers in Asia.”

The recipe he shares is a bright and refreshing salad with some kick, thanks to Thai chiles. “It’s peak cucumber season in Texas right now,” he says. “So that’s why I chose this dish.”

The salad also incorporates red onions, coconut, red bell pepper, and kaffir lime. If you’d like to escalate it a notch, add kanikama (imitation crab meat) or even real crab. 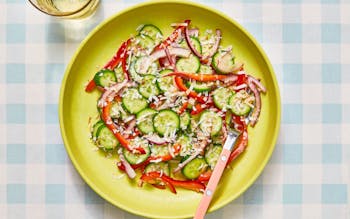 The water-dense fruit (yes, cucumber is a fruit) serves as a great base for a cooling salad that kicks it up a notch with a spicy dressing.
Servings 4
Print Share