“She used to sit on the porch, smoke cigarettes, eat watermelon, and sharpen her hoe to cut the yard,” Martinez says. “I would tell her, ‘Grandma, you know, we can get a lawn mower or a Weed Eater.’ And she was like, ‘No, you’re not gonna do the yard right.’ Mind you, it wasn’t like we even had nice grass.”

Martinez, who now shakes up cocktails at Bar Nido in Laredo, says he takes inspiration from both of his grandparents when crafting recipes. And this cocktail is an ode to his grandma, who raised him—it’s even named after her.

“I use mezcal because it’s smoky and earthy,” he says. “And then I add salt to balance out some of the sweetness from the watermelon, and the ginger root just pairs really well with the watermelon. I wanted to make something fresh.”

Martinez strains the drink over pebble ice but says that any ice should work. What’s important, however, is that you use only a pinch of salt when dusting the watermelon cubes, since a little goes a long way. Just like his grandma would do it. 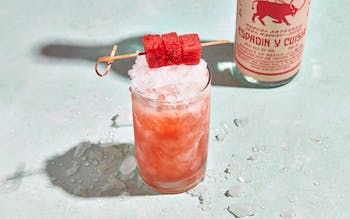