Welcome to In Season, our series celebrating the juiciest fruit and crispest veggies in Texas. This fall, we asked local chefs to share stories about their favorite items of seasonal produce—and to create original recipes that make the most of autumn’s bounty.

Rob Arambula didn’t take notice of persimmons until he moved from San Antonio to Los Angeles in 2018.

“The first time I saw them, I was working at this restaurant in California,” he says. “They were super juicy and super sweet. The chef designed a fruit-and-vegetable course around the persimmons for a vegan person. I thought that was pretty cool.”

While there are numerous varieties of the fruit, the most common persimmons found in the United States are Hachiya and Fuyu, which are sweet and slightly tangy. But there is also the native Texas persimmon, which is smaller and black, instead of the more common orange. Many of the varieties grow well here, and the fruit can be eaten fresh off a tree or cooked into a dish such as a pudding or, in this case, a salad.

Since moving back to San Antonio in 2020, the chef de cuisine at New American restaurant Up Scale, located in the Southtown neighborhood, has taken an interest in cooking with persimmons.

“This fruit is very versatile,” he says. “You can do whatever you want with it. And last year, when I came to work at Up Scale, I happened to go to the Central Market here in November, and I found persimmons. I was like ‘All right, cool. I’ll get some and play with them.’ ”

And play he did. Arambula came up with original recipes using the fall produce—one being this showstopper of a salad, which he says will make its way to Up Scale’s menu once he has access to persimmons on a weekly basis. 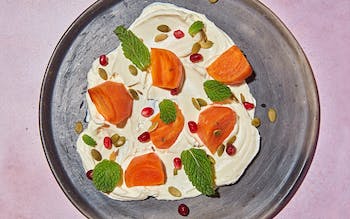 Plan a day ahead based on how long you’d like to marinate the persimmons.
Comment and Review