Welcome to In Season, our series celebrating the juiciest fruit and crispest veggies in Texas. This spring, we asked local chefs to share stories about their favorite items of seasonal produce—and create original recipes that make the most of spring’s bounty.

Like so many others, bartender Tiffany Reagan was laid off in 2020 at the beginning of the pandemic. With nothing but time on her hands, she decided to make the most of the situation and planted a garden in her Amarillo backyard. Her first ripe bell pepper was ready to be plucked in early May. Exciting! Followed by many, many more that sprouted shortly after. Uh-oh.

“I may have gone overboard with planting peppers,” Reagan says. “I didn’t realize how much they produced until I was growing them.” This resulted in a surplus of vegetables piled up on her kitchen counters. “I tried to give them away to my neighbors and they were like, ‘No! You already gave them to us last week, we still have some.’”

Her green thumb might be attributed to advice passed down from her grandma. “My grandmother always said it helps plants to grow better when you whip them,” Reagan says. “She would go outside with a flyswatter and whip her tomatoes. I thought she was nuts.”

But now that Reagan has attempted this method herself, she’s convinced it works.

One spring afternoon, Reagan was overcome by a hankering for something refreshing. She scanned her kitchen for inspiration. There was an overripe, borderline-expired pineapple sitting on the counter next to an enormous heap of peppers from her garden.

“I grabbed the bell pepper, grabbed the pineapple, and was like, ‘I’m gonna whip something up,’” she says. “All this leftover produce was staring me in the eye like ‘Use me! Use me!’ and it turned into this fantastic cocktail.”

Now the bar manager at the Barfield hotel in Amarillo, Reagan has been using her own peppers when she makes this cocktail at home (that’s pretty much as local as it gets), as well as honey from Creek House Honey Farm in Canyon. 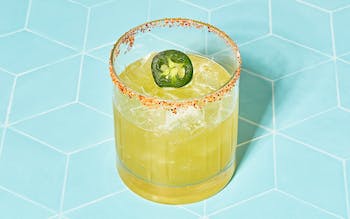