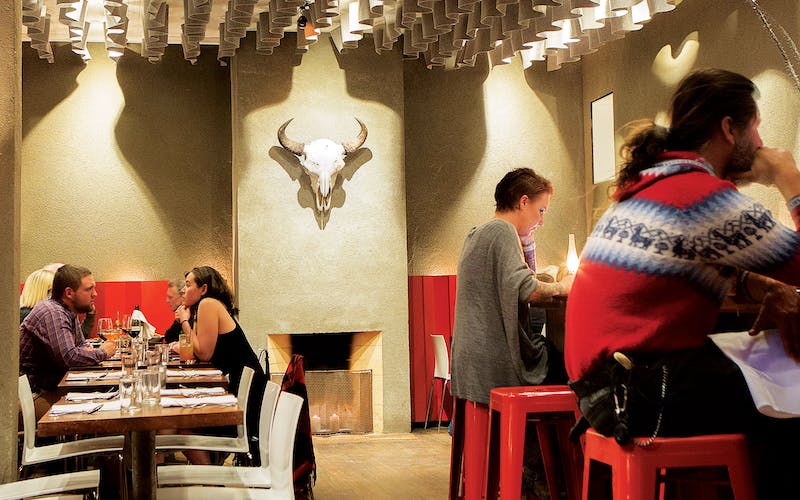 The dining room at Cochineal.

Partly in response to the pandemic, Cochineal pivoted to a prix fixe concept last year, and though that term may conjure assumptions about a certain highfalutin-ness—one pictures a course comprising a single chickpea served on a tiny swing—the restaurant fulfills its promise of “casual fine dining.” Our $85 seven-course dinner was ambitious but hearty: excellent bread elevated by a charred spring onion butter; wild boar meatballs in a homey mezcal sauce; a hush puppy–like paella fritter with a glob of rabbit confit; lamb with a disk of mesquite flatbread. Some dishes were inventive but missed the mark, such as a vinaigrette-soaked cut of an artichoke, which was too mushy at the heart and too tough at the supposedly edible bracts, and a strawberry mousse mille-feuille whose rigid heirloom-grain feuilletine shot off the plate whenever we came at it with a fork. In lieu of the beverage pairing menu, which seemed to overwhelm the servers, opt for wine: Cochineal is short on wines by the glass, but the bottle list offers a good balance of accessible options. Expect to spend at least two and a half hours; our meal lasted three, with several long lulls between courses that encouraged eavesdropping on other diners. A couple on a date at a table nearby appeared to be tiring of each other midway through their course load, so be sure your companions are in it for the long haul.