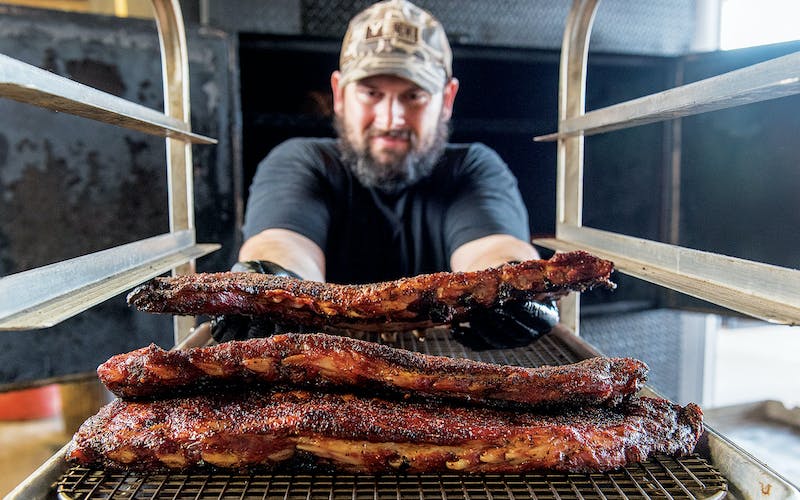 Before they turned their attention to the culinary arts, Arnis and Mallory Robbins ran a landscaping company in Arizona. They went from cutting grass to cutting some of the best meat in the state when their food truck opened outside Lubbock six years ago. Evie Mae’s moved into an actual building a year later and is now the crown jewel of West Texas barbecue. Don’t be intimidated by the long line—it moves fast. Instead, grab a free beer from the cooler and peruse the desserts on display. Strawberry cake, Texas sheet cake, and no fewer than two versions of pecan pie are available most days. Beef ribs sell out quickly, but you’ll be just as satisfied with the fatty brisket, especially the decadent burnt ends. Saucy pork ribs have gotten trendy, so we appreciate the more subtle seasoning on these perfectly smoked St. Louis–cut ribs. The same could be said of the German smoked sausage. Yes, there’s a spicy, cheesy version too, but the original is bursting with flavor and has the perfect snap, no gimmicks needed. For sides, fresh green beans and green-chile cheese grits are hard to beat, though you shouldn’t ignore the cornbread. For a change of pace, look for the occasional smoked prime rib dinners (so popular you’ll need a reservation). And if you’re in the market for a massive new smoker, Arnis will weld one for you in his shop next door.