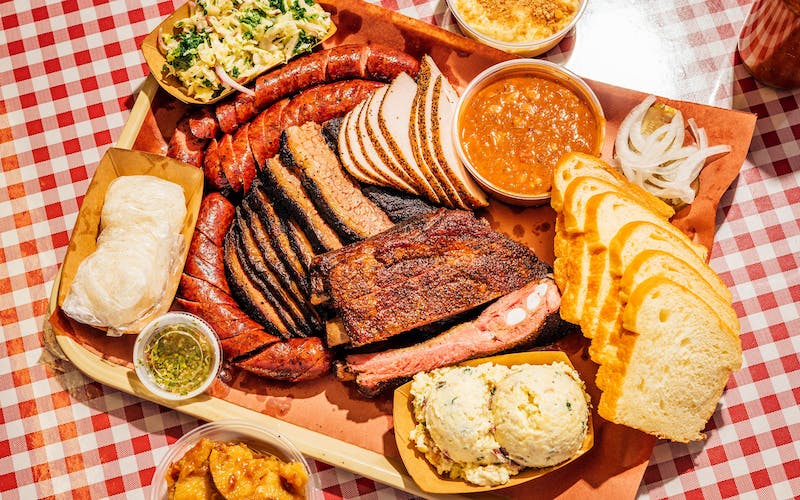 a tray of meats and sides at Goldee's Barbecue, in Fort Worth, on September 24, 2021.
Photograph by Arturo Olmos

Last year a few young pitmasters joined forces to take an abandoned building on the southeast side of Fort Worth and create their ideal of a modern barbecue joint. Though they lacked the decades of experience typical of many top-flight cooks, this band of barbecue wunderkinder had worked at some of the best joints in Texas (Franklin, La Barbecue, Micklethwait, Valentina’s). But just after opening, in February 2020, the dining room was forced to shut down because of the coronavirus pandemic. Goldee’s barely hung on as a take-out operation until this April, when it fully reopened. (When we recently joked to Jonny White that they should be selling more than fifteen briskets a day—compared with the hundred or so at Franklin—he replied, “It’s better than the four a day we were selling last May.”) So, what shot this modest joint into our top spot? Simply put, food that’s close to perfection. During repeated visits, we searched for weaknesses and inconsistencies, only to find, again and again, the state’s best spareribs and spectacular sausage and brisket. While many places have come to rely on the common crutches of excess—too much salt on the brisket, too much sugar on the ribs—Goldee’s demonstrates a confident restraint that belies the pitmasters’ youth. They trust the meat and the smoke more than an arsenal of seasonings. That attention doesn’t waver when it comes to sides, especially the peppery cheese grits and the mustard-heavy pork hash. And then there are culinary surprises such as Nupohn Inthanousay’s Laotian sausage: take a chunk, mash it into a bit of sticky rice, and dunk the combo into the spicy-sour jeow som sauce. Your eyes will open wide as you gaze at the new horizons of Texas barbecue.

Pro-tip: Dick Price Road may look like a sleepy country lane, but you’d be wise to pay attention to those 35-mph signs.