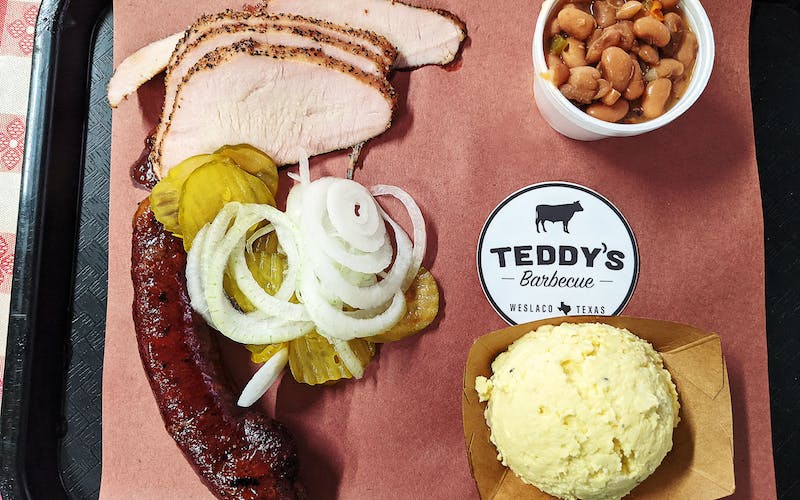 The brothers Garcia are Rio Grande Valley natives, but Joel received his barbecue education in Austin at Freedmen’s and Terry Black’s. Jesse, a culinary school grad, also worked at Freedmen’s and later joined his sibling at Smokin’ Moon BBQ, in nearby Pharr; it was Joel who was manning the smokers there in 2019 when that establishment made our list of the state’s 25 best new barbecue joints. Now running their own place, the sibling scholars are dishing out Central Texas–style barbecue that’s a study in pepper: the perfectly rendered lean brisket has a piquant bark thanks to a pepper, salt, and Season-All rub, which is also used in the pulled pork. The pork ribs’ sweet glaze offers the palate some relief, but the must-have is the sausage, spiced with salt, black pepper, cumin, garlic, cayenne, and crushed red pepper. Enjoy your platter at a picnic table in the outdoor area, which has a stage for live music.

Pro-tip: The Garcias’ mom, Ana, makes homemade flour tortillas (two for a dollar) using the beef fat rendered inside the smokers. They sell out quick, so show up early.