Trying to distill the Houston taco universe into a handful of worthy destinations is something of a fool’s errand. An educated guess at the number of taquerias, taco trucks, trailers, stands and joints that are inside the Beltway would hover around 500 to 600 places that are worth a visit. Fortunately, though, many of Houston’s best tacos can be found in clusters along the “taco streets” that criss-cross the city. Long Point Road was a long-time destination, though gentrification in the adjacent Spring Branch neighborhood has contributed to the loss of classics like Otilia’s. But happily, other streets and neighborhoods have stepped up their game, compensating for the decline. A manageable tour of Houston tacos would proceed from south to north along the I-45 corridor. Starting in the Edgebrook neighborhood near Hobby Airport, you’d proceed to the traditionally Hispanic East End, then on to Irvington Boulevard north of downtown, and finally to Airline Drive north of I-45, which features perhaps the highest concentration of “street tacos” in the city. So why all this taco tasting madness? Not that there really needs to be a reason to want to eat all the tacos, but Texas Monthly is beginning its research on finding the best tacos across the state, a list we’ll publish at the end of the year. Our quest to unearth the top contenders already took us on a taco tour of Austin, where we scouted out more than 100 tacos at taquerias, food trucks, highfalutin joints—well, basically any place were tortillas are slung and filled—and settled on 16 great options from the capital city. We then explored the vast expanse that is DFW, turned our appetites southward to the RGV, and scouted San Antonio (or at least the Loop 1604 area) for its greatest hits. This latest list is far from comprehensive, and as we continue our mission to find the best fillings stuffed in a folded tortilla, we ask that you share your recommendations (like we could stop you). In the meantime, here are 15 of the best tacos in Houston. 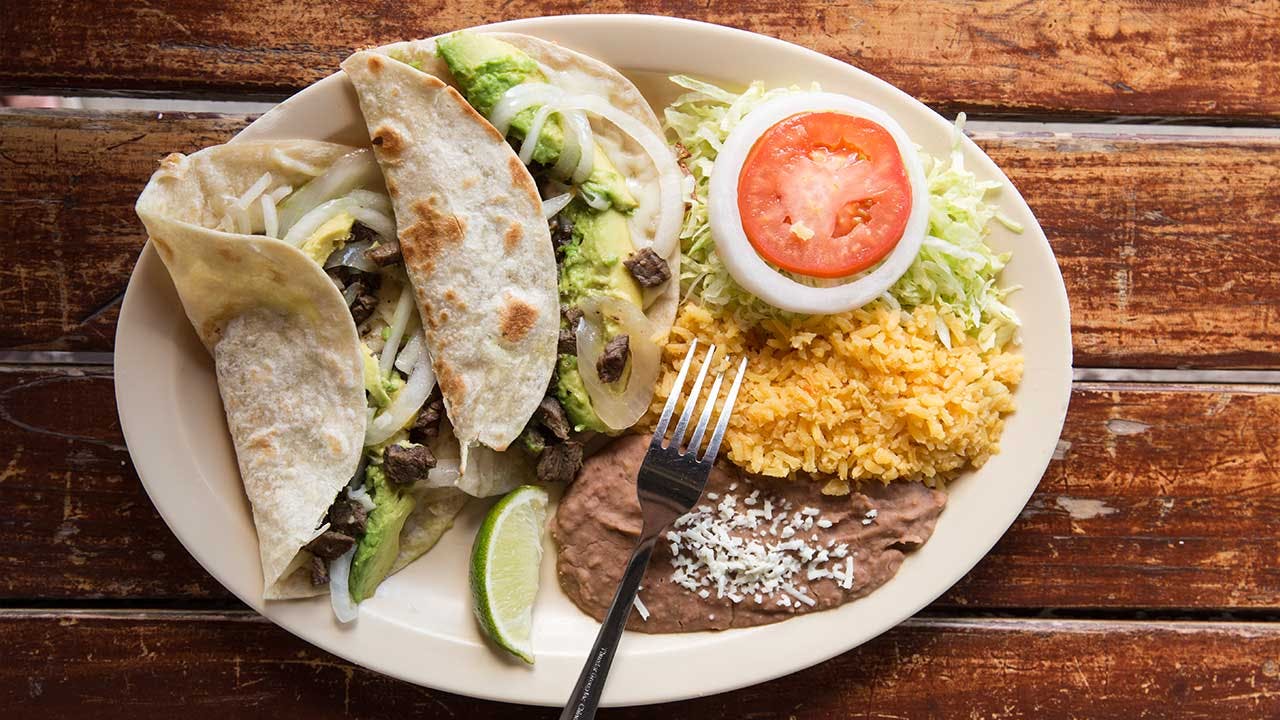 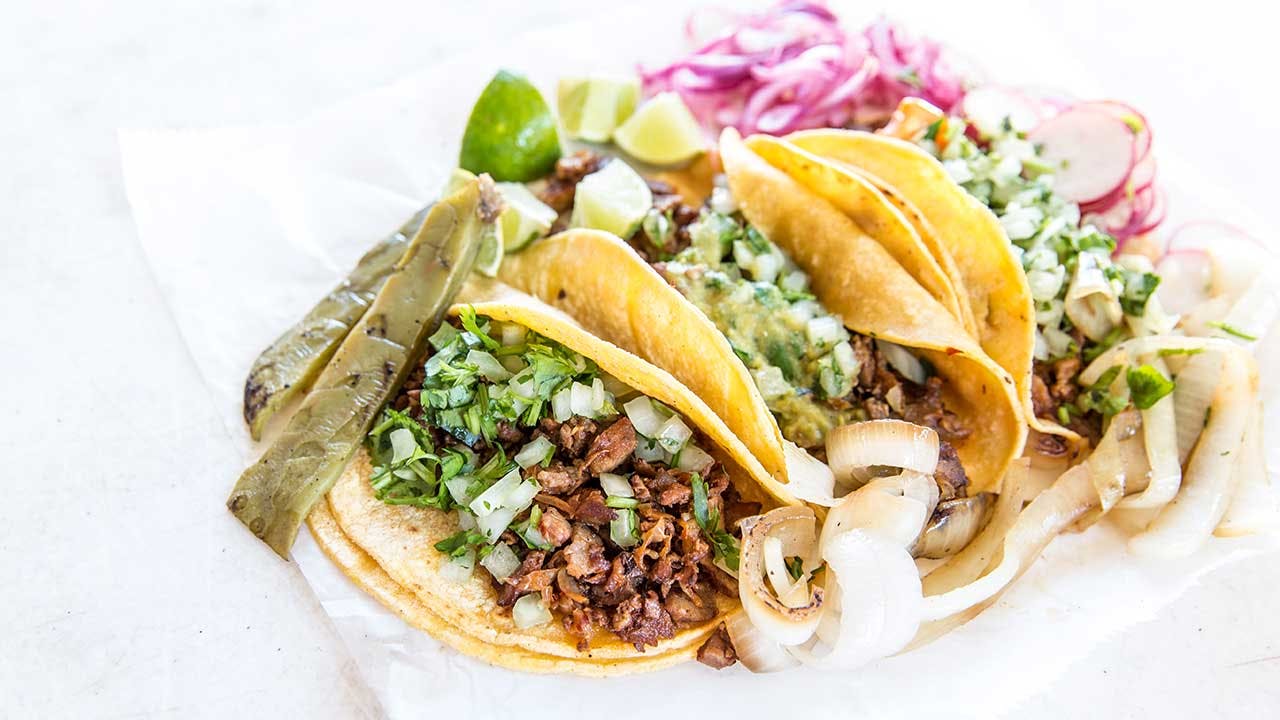 Ground zero for Mexican street food culture in Houston has coalesced within the bustling and chaotic flea markets along Airline Drive. Sunny Flea Market, a colossal agglomeration of barn-like structures featuring stalls selling everything from used electronics, car parts, and jewelry, also features some of the city’s best tacos. Here Rodriguez brothers serve al pastor tacos from a traditional trompo, a vertical roaster with slabs of adobo-seasoned pork. The taquero slices off chunks of cooked pork and fries them until slightly crispy. To order, look for the brother with the notepad (three tacos per person is the norm). Grab a booth in front of the trompo and watch your order being made.
8705 Airline Dr, 832-691-3524. Open Sat–Sun 8 a.m.–7 p.m.

(To avoid getting lost, follow these directions: From I-45, drive north on Airline for four miles. Just after Mitchell Road, you’ll see a “Sunny Flea Market Parking” sign on your left. Park and walk north along the sidewalk on Airline. Just past the bus stop is an entry to the market. Los 4 Brothers is the first stand.) 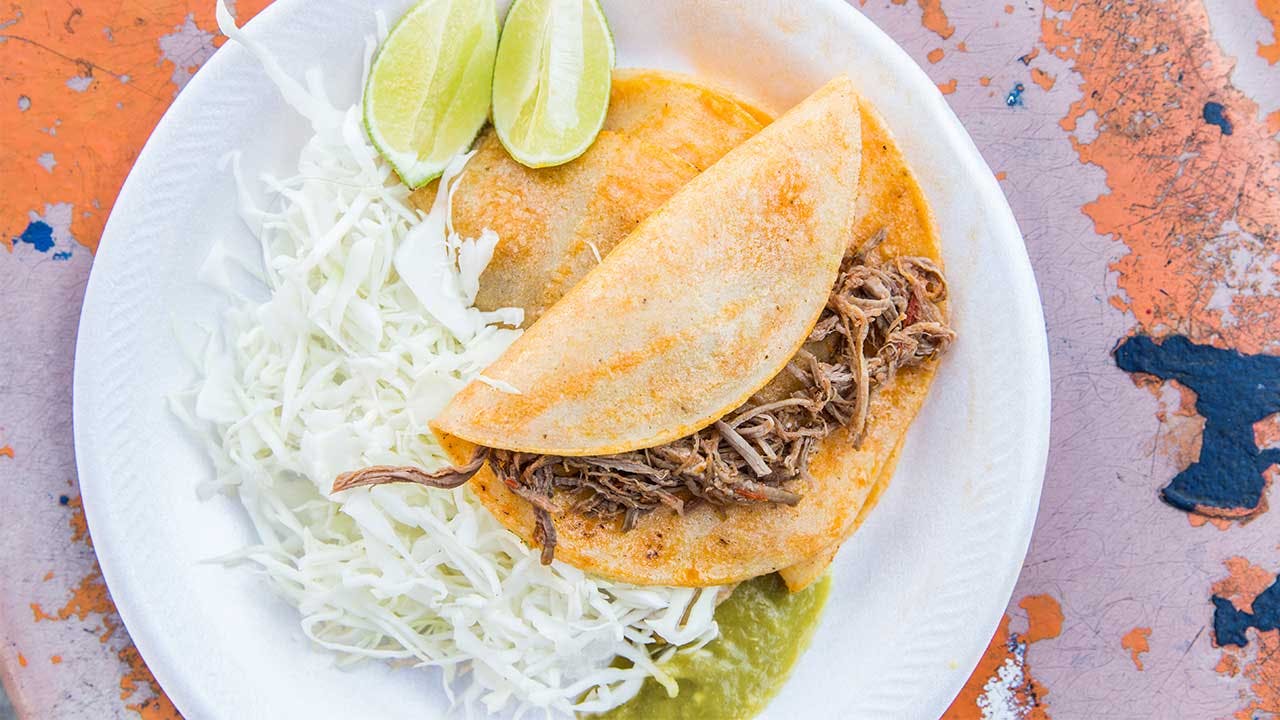 Tacos “al vapor” are a northern Mexican specialty featuring corn tortillas that are steamed instead of warmed on a griddle, giving them a slick, slippery outside with a texture similar to al dente pasta, albeit with the subtle fragrance and flavor of corn. Fillings tend to be on the moist and creamy side to work better with the tortillas. This truck only serves three types of tacos—beans (of the refried variety), boiled potatoes, and shredded beef. Such ingredients can easily turn out bland and mushy, but the ingredients here are well-seasoned, and a curtido-esque side of shredded cabbage can be piled on top to give the whole thing a pleasant crunch. Top everything off with a drizzle of the zingy, acidic tomatillo sauce and you may never go back to regular tacos again.
9000 Airline Dr (truck in parking lot), 281-272-1467. Open Sun–Thu 9 a.m.–5 p.m., Fri–Sat 9 a.m.–8 p.m. 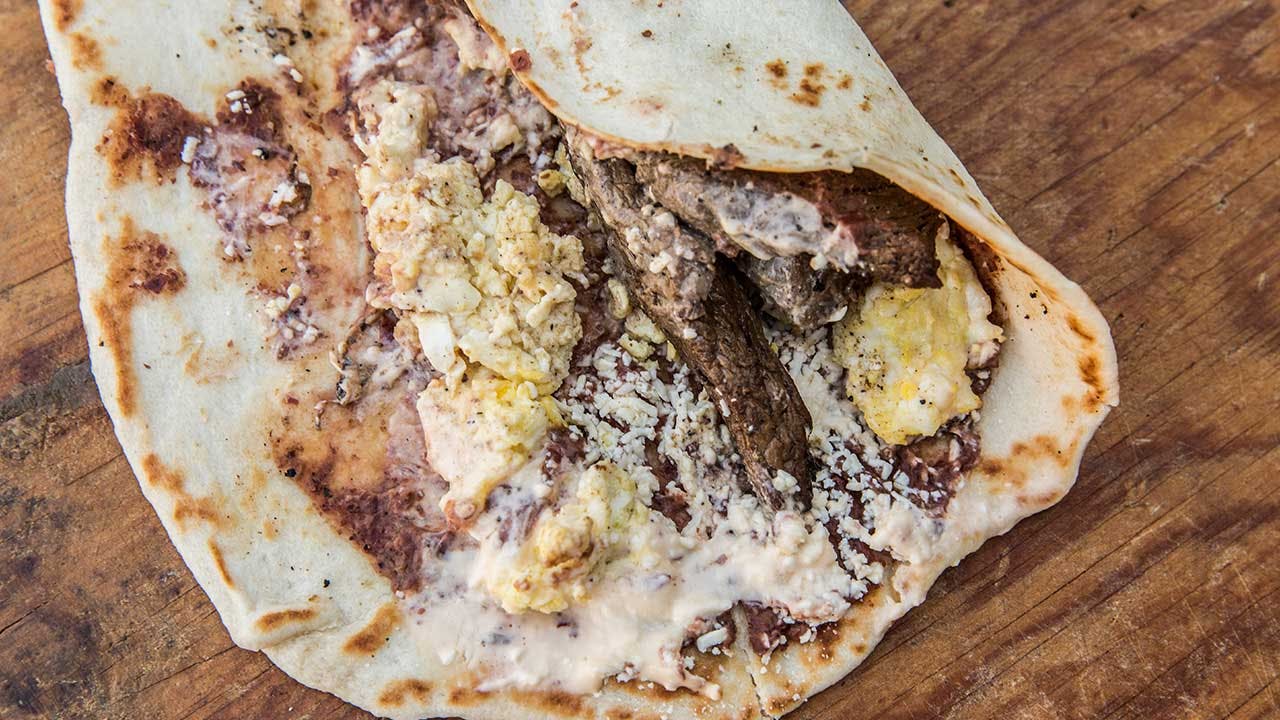 The Honduran answer to a meal-sized soft taco is the baleada—an oversized flour tortilla filled with refried beans, sour cream, a cotija-style crumbly cheese, and your choice of meat. Get the carne, or fajita-style meat here, caramelized strips of seasoned beef that often seesaw between gloriously tender and challengingly chewy. Still it’s a deliciously hot mess of an Honduran taco, more than enough for one person.
9713 Airline Dr, 281-447-7757. Call for hours. 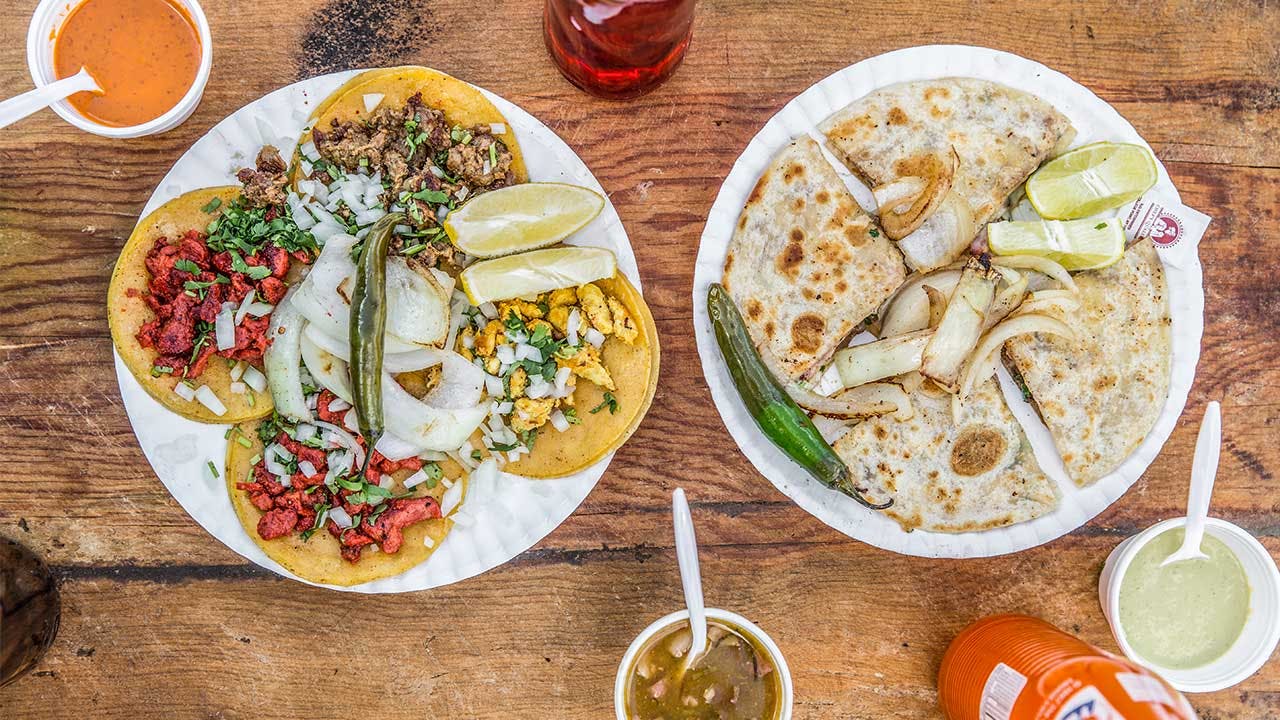 This spiffy taco truck on Edgebrook Drive—with its jalapeño pepper mascot standing on a cactus and wearing a sombrero and cowboy boots—is hard to miss. Tacos here are a steal at $1.00 each. All, that is, except the tripa (beef tripe) tacos, which go for $1.50, a $0.50 splurge that is definitely worth it. The chopped and diced meat is cooked until tender, before getting crisped up on a flat top. Order them on a corn tortilla, and sprinkle liberally with cilantro and onions. Also try the sandwich-like sincronizada tacos, featuring two flour tortillas stuffed with salty slices of ham, melted Oaxaca cheese, and shreds of crunchy green onion.
1002 Edgebrook Dr, 281-831-5681. Call for hours. 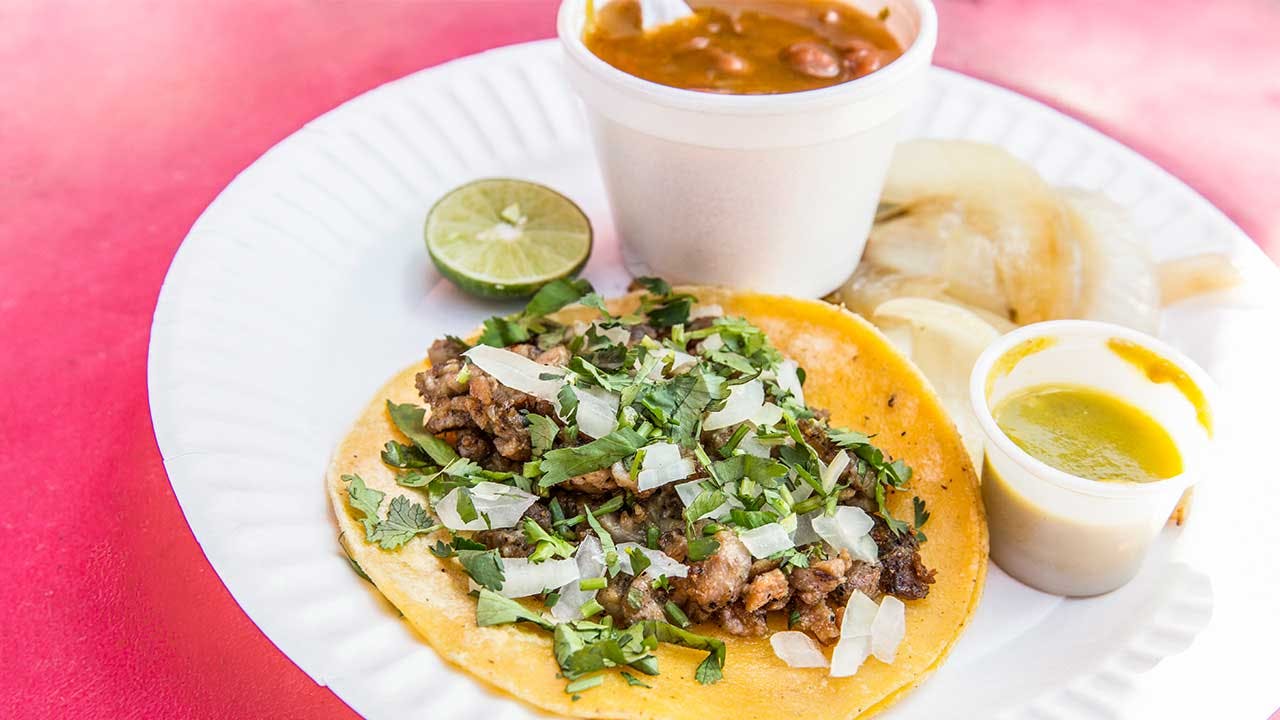 This big reconditioned tour bus features a majestic painting of a big-horned sheep (Borrego’s namesake, it would seem), but surprisingly this place doesn’t serve barbacoa de borrego tacos. Normally I would protest such taco teasing, but the other options here are just too good to pass by. Mollejas—sweetbreads—tacos are a standout, filled with finely-chopped and grilled meat and served on corn tortillas with onions and cilantro. Ask for a cup of the salty-smoky charro beans to snack on while waiting for your order.
1063 Edgebrook Dr, 832-887-1087. Call for hours. 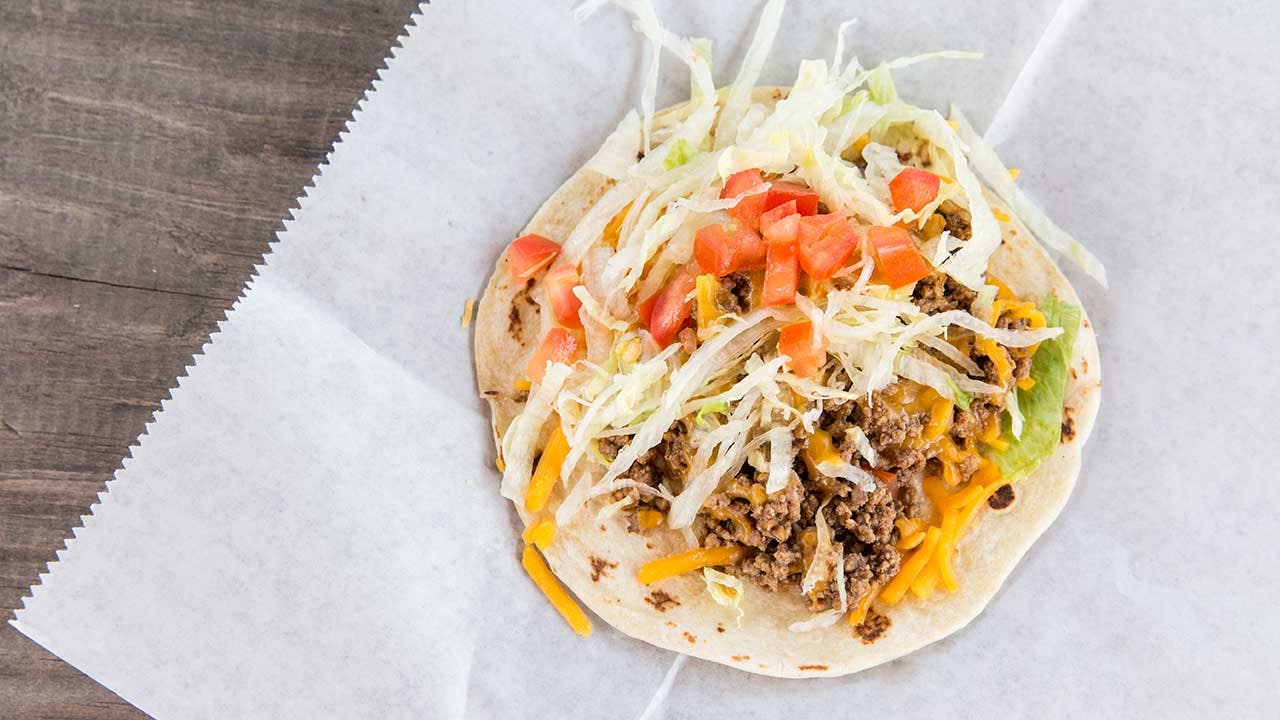 This tiny taco stand is easy to miss if you’ve just exited Interstate 45 on your way to Hobby Airport. But whether you’re coming or going, it’s worth a stop (you can catch the next flight; your grandma can get a cab). Noemi’s full menu includes classic Tex-Mex plates, tacos, and one of the best bowls of menudo in the city. For our taco tour purposes, we recommend you get the “beef” taco, filled with aggressively-seasoned (in the best possible way) ground beef in a handmade flour tortilla and topped with lettuce, tomatoes, and cheese.
8010 Park Place Blvd, 713-645-7907. Open Mon–Sat 8 a.m.–6 p.m. 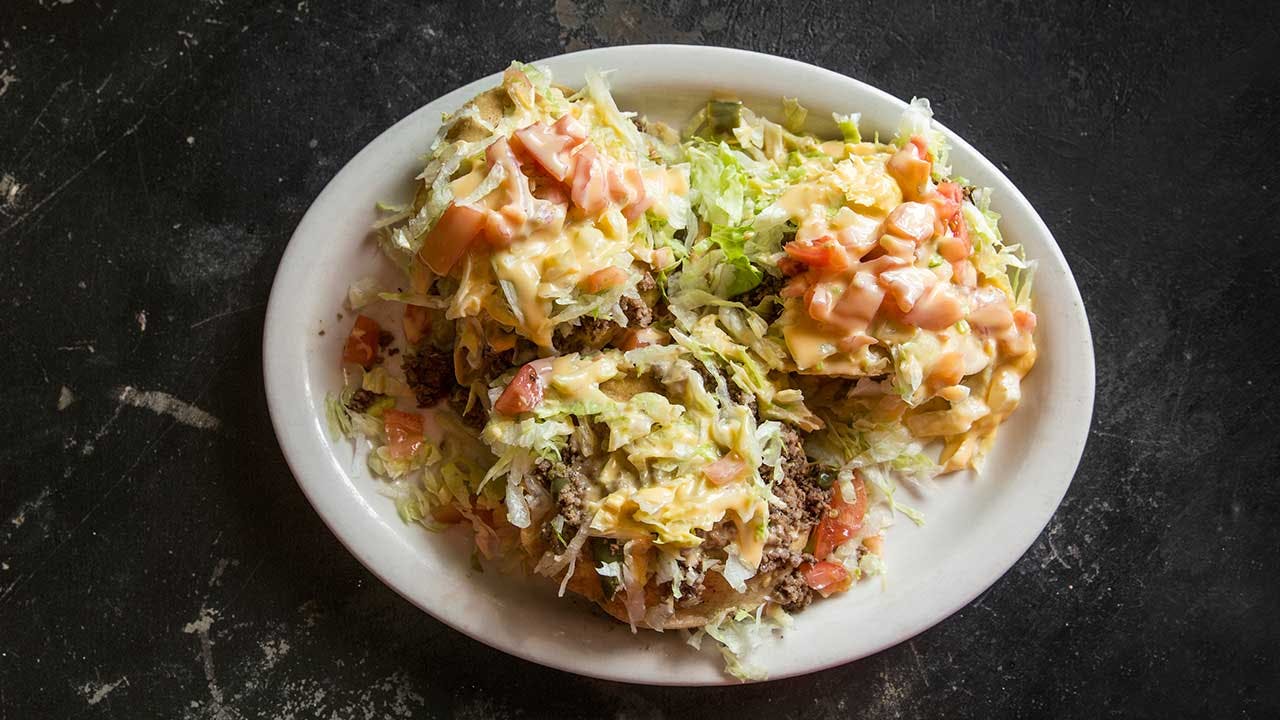 This is one of the last of the old-school Houston Tex-Mex joints dating from the fifties and the Felix Tijerina era. Tucked into a standard-issue Tex-Mex menu of fajitas and enchiladas are the “beef tacos a la Martin,” featuring Houston’s own version of a San Antonio puffy taco. A corn tortilla is flash-fried in oil so it becomes puffed up and imminently crunchy. It’s then filled with ground beef and drenched in queso, shredded iceberg lettuce, and diced tomatoes. An inquiry with the staff suggested the originator of this dish is long gone—no one knew who Martin was.
2111 Telephone Rd, 713-924-6074. Open Sun 10 a.m.–4:30 p.m., Mon–Wed 10:30 a.m.–9 p.m., Thu–Sat 10:30 a.m.–10 p.m. 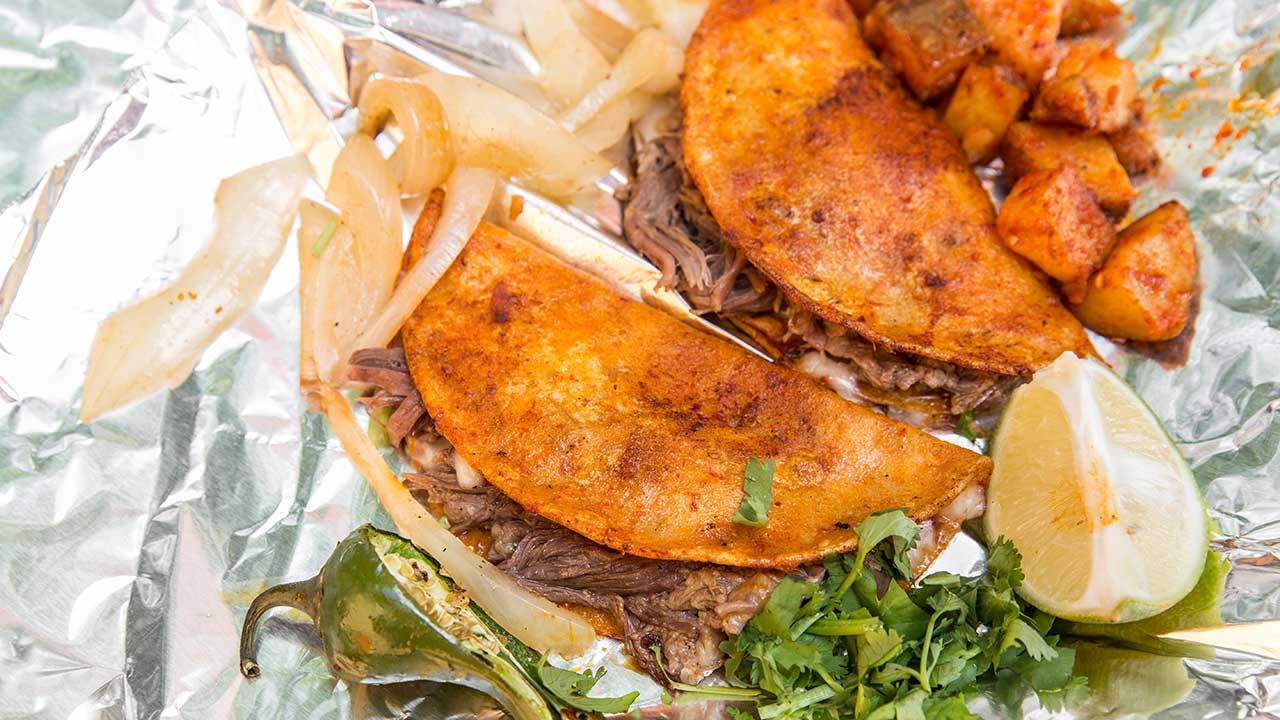 In the rapidly gentrifying neighborhoods east of downtown—variously called the East End, Eastwood, or the more trendy “EaDo”—the blue-collar businesses of this traditionally Hispanic area sit side-by-side with an influx of art galleries and coffee shops. It is also here that you will find the tiny, blood-red taco trailer known as Taco Keto wedged into a corner of the parking lot of Julio’s Auto Shop (“mecanica en general”). Taco Keto is a play on the Spanish word coketo (coquette in English), which means “one who flirts.” And indeed the menu here is quite flirty, with rarely seen tacos like guilotas (quail) and deshebrada (shredded beef). Even more unique are the corn tortillas which are slathered with a red chili sauce before being warmed on the flat top, a tradition from northern Mexico that harkens back to the proto-enchiladas of that area, featuring flat layers of tortillas, red chile sauce, and cheese.
1401 Cullen Blvd, 713-224-1898. Open Tue–Wed 5 p.m.–11 p.m., Thur–Sat 11–midnight.

The Original Ninfa’s on Navigation 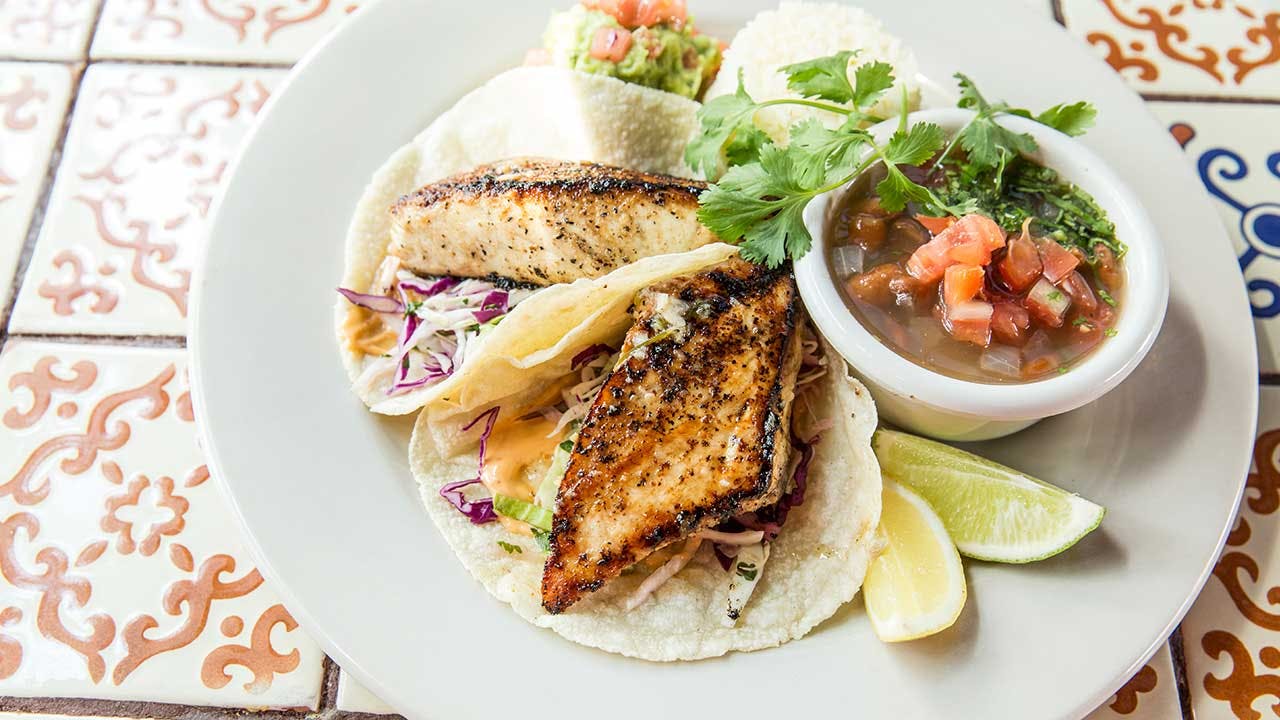 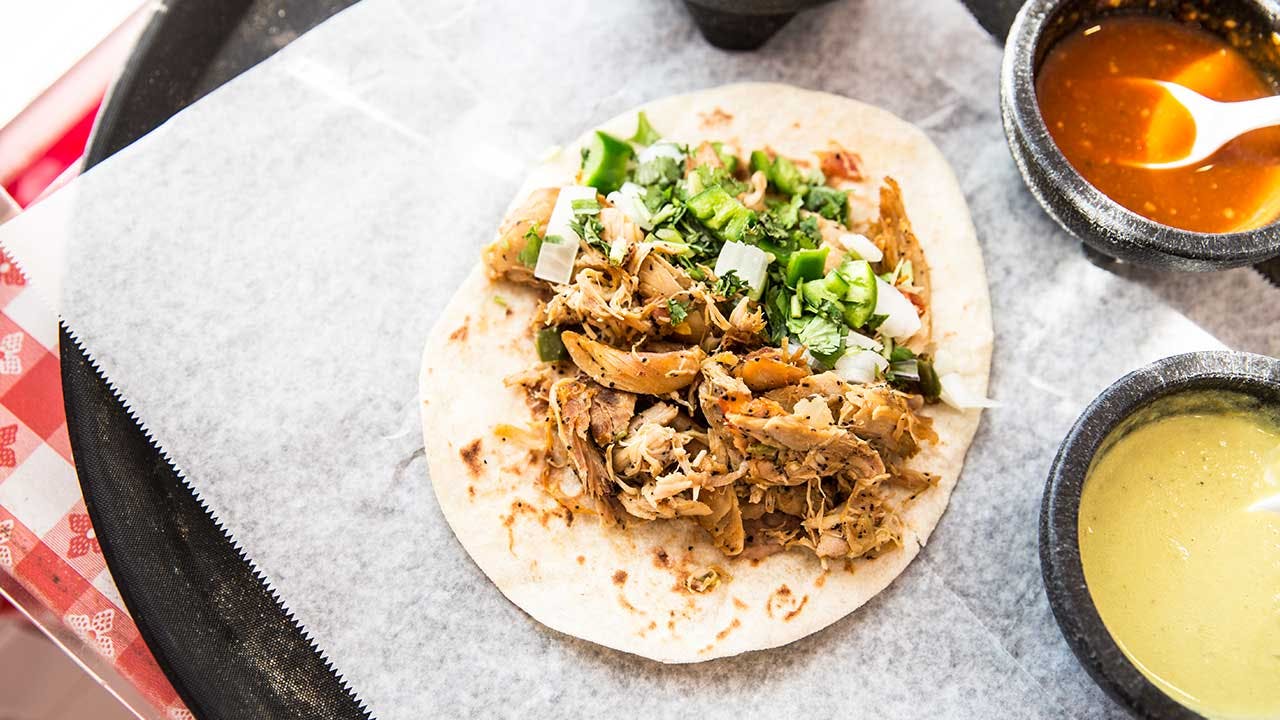 The several outposts of this chain have become synonymous with breakfast tacos in Houston, and the Patton location is arguably the best. Known for barbacoa and nopalitos (cactus) tacos, the excellent spicy chicken tacos are an oft-overlooked option. Ask for the house-made flour tortillas, and the kitchen will serve them with a smear of refried beans and top them with the savory stew of chicken, bell peppers, onions, and jalapeños.
311 Patton St, 713-695-0504. Open Mon–Sat 6 a.m.–6 p.m. 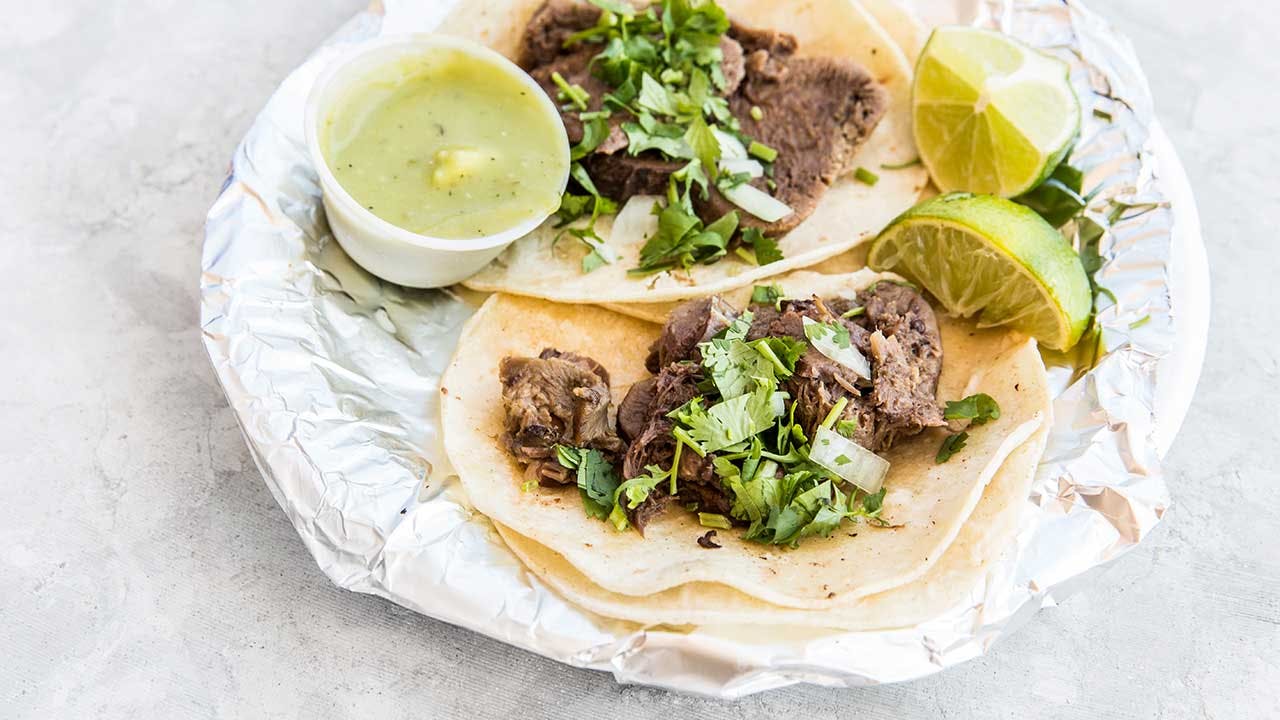 Veteran Houston taco hunters know that the best place to find taco stands is in or behind vulcanizadores—the “flat-fix” tire shops that dot the traditionally Hispanic neighborhoods north and east of downtown. Whatever symbiotic relationship there is between tires and tacos has produced many great taco outlets, including the Taconazo trailer next door to the Latino Tire Center on Fulton Street. There’s nothing fancy about the menu here: they serve just fajita, barbacoa, lengua, and trompo. Indeed all the taco flavors are excellent, but the lengua (cow’s tongue) makes Taconazo a destination. There’s little room for error when making lengua tacos—anything less than a perfect preparation will often taste too gamey. The excellent lengua here will make even the most conservative eater a cow’s tongue connoisseur. Takeout and cash only, and expect the service to be gruff.
4003 Fulton, (no phone). Open 7 days 9 a.m.–midnight. 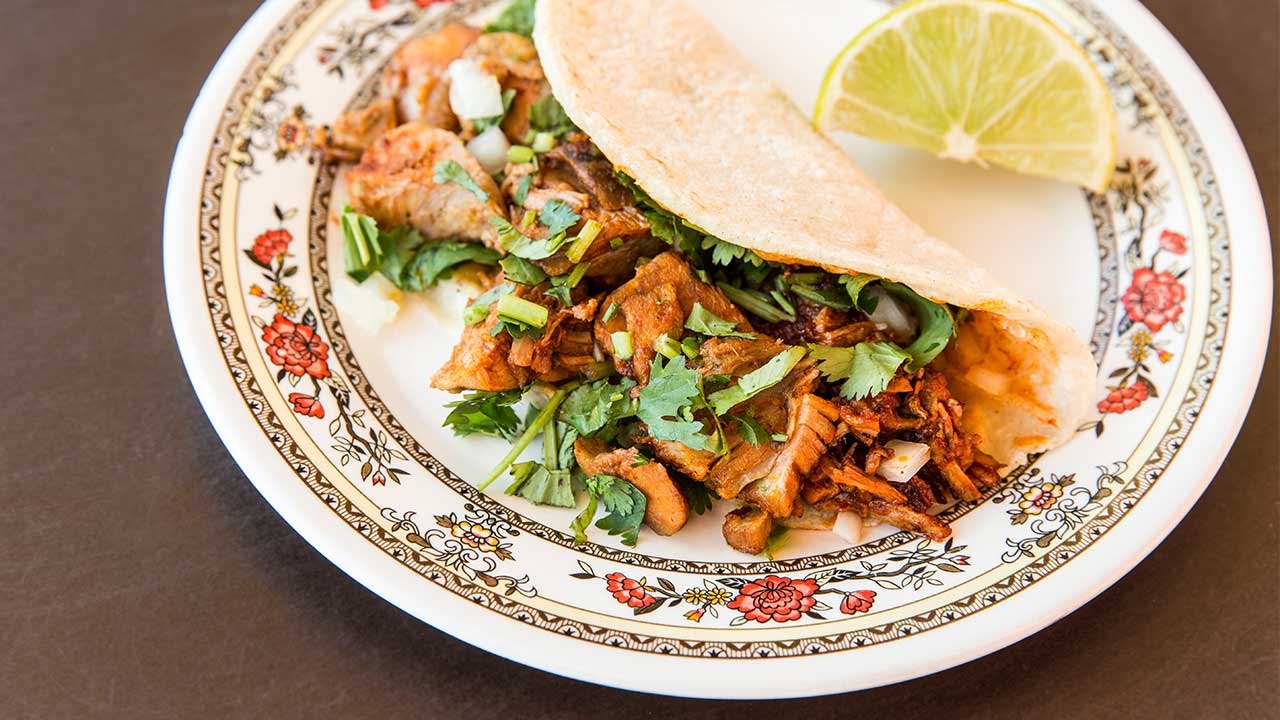 One whole wall of this funky Tex-Mex/Mex-Mex joint features a tortilla-making station that cranks out a never-ending stream of slightly thicker, gordita-style corn tortillas used to cradle an excellent selection of taco meats such as barbacoa and lengua. But the piernas—pork shank seasoned in an earthy red sauce—may be the best of the bunch. Weekends feature a huapango trio strolling and playing among tables with guests dipping into big bowls of menudo.
3810 Irvington Blvd, 713-697-7888. Open Sun–Thu 7 a.m.–1 a.m., Fri–Sat 7 a.m.–2 a.m. 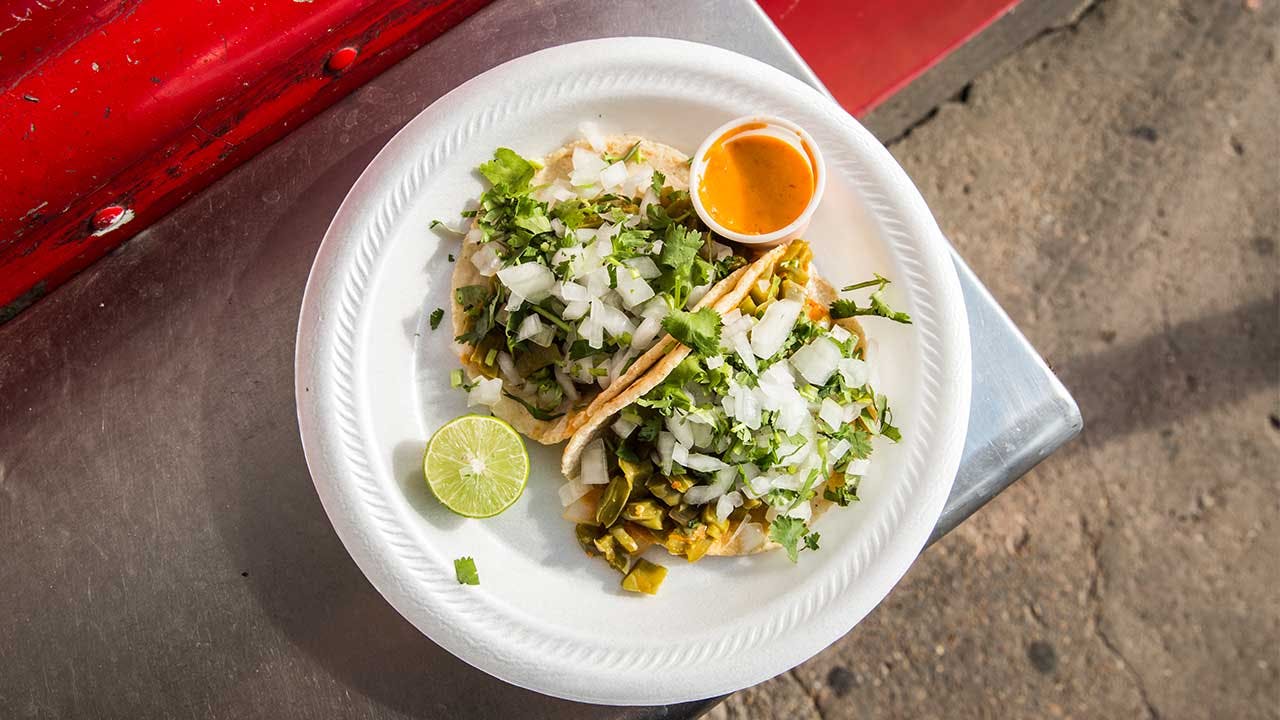 This taco truck on the corner of Irvington Boulevard and Berry Street is famous for their $0.99 tacos made with fresh corn tortillas and a tasty menu of meats like pastor and fajita. But if you’re in the mood to branch out, the nopales (cactus) tacos are some of the best you’ll find in Houston. Diced cactus pads are cooked until tender and not-too-slimy (think well-cooked okra), seasoned, and served with onions and cilantro.
8507 Irvington Blvd. Open Mon–Sat 8 a.m.–4 p.m. 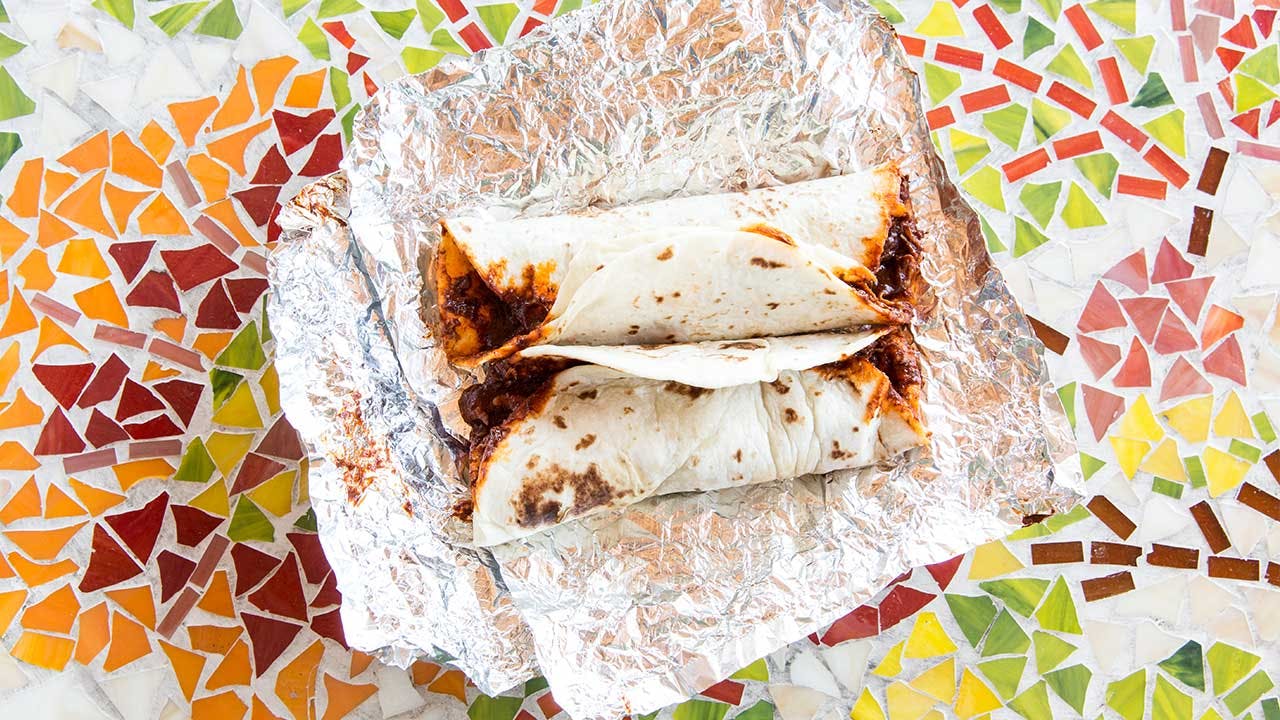 Alamo Tamale is a Houston institution, and this newer location north of downtown features counter service and a big dining room. If you’re dropping in to pick up tamales for a holiday or event (a local tradition), grab a couple of tacos for lunch while you’re there. The chicken mole taco is a meal in itself—a big flour tortilla is filled with a dab of frijoles (refried beans), and big chunks of tender chicken stewed in a smoky red mole sauce are ladled on top.
809 Berry Rd, 713-692-6363. Open Mon–Thu 5 a.m.–6 p.m., Fri–Sun 5 a.m.–5 p.m.