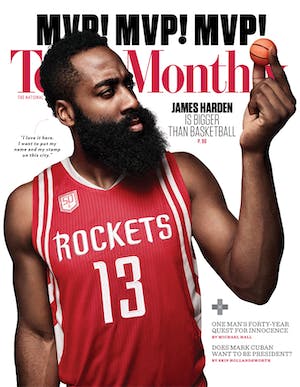 In the middle of Julian and Kate Pastrana’s tree-covered acreage near Denton sits an impressive three-thousand-square-foot building. In one half of the live/work space, the couple create pieces for their furniture and home accessories line, Pastrana Studio. In the other they live with their three-month-old son, Rooney.

Kate’s paintings—she was an art major at the University of North Texas—hang on the walls of their home alongside cutting boards of her own design, constructed by Julian and now being sold exclusively at the spare home goods store Set & Co., in Dallas. The dining room table, chairs, and kitchen bar stools are just a few of their other creations that fill the nooks throughout the modern abode. A baby crib made of solid maple is the focal point of the nursery.

“Creating is something I feel compelled to do,” says Julian, who is also a full-time firefighter in Flower Mound. “I wake up every day wanting to work with my hands.” His creative pursuits began with music. Johnny Cash, Elvis, and Marty Robbins inspired him to try his hand at songwriting, so he taught himself to play the guitar. Along with the music of the fifties, he was also bewitched by the clean, simple lines of both the fashion and the furniture of the day. But he didn’t start thinking about making his own pieces until he met Kate, in 2008. They were married four years later and launched Pastrana Studio in September 2014.

“Meeting Kate helped me push myself way beyond what I thought my limitations were,” he says. “She challenges me daily to think about new or different ways of doing things. You wouldn’t get anywhere with someone just telling you that everything you put out is great. She gives me honest critiques that challenge me to dig deeper.”

You and Kate started Pastrana Studio together soon after you got married. Who does what?

Kate does a lot of the design and then I build the pieces. After the birth of our son, Kate started focusing more on the business and promotion side while still weighing in on design. Lately, I will dream about a piece I want to build and share that idea with her and then she will draw it out.

You began your career as a musician. When did that path change?

I spent a few years playing local gigs, but then I decided to work construction after I found myself broke and selling guitars to make rent. Working in residential construction is where I learned a lot more about tools and the building process.

Do you have a favorite kind of wood to work with?

Most of our pieces are walnut, but we have also been using oak, hickory, pecan, and cherry. No matter the wood, we never use stains. We love the purity of it and the beauty it holds inherently. No two pieces are the same. Being able to shape the wood makes it feel like a canvas, and I approach it in the same way a painter would.

What was the first piece of furniture you made?

It was a dining table and a bench for Kate and her roommate. We sold it to a friend who still uses it today.

Were you a maker as a kid?

My brother and I are close in age, and growing up, we were always encouraged to go outside. We would build a lot of forts.

Who was your biggest creative influence?

My mother, who encouraged me to play guitar. She taught me to draw and to sew. I remember, growing up, it always felt like she could do everything. My brother and I both pursued creative fields because of her influence. He builds robots.

How has becoming parents changed your creative process?

Being parents has, in a sense, taken away our time to physically create, but it has also granted us more time to think about pieces and imagine new concepts. I also feel more of a responsibility to raise my son to learn the value of hard work and what it means to use the abilities and talents that have been given to us for a purpose. I look forward to teaching him about art as he grows older.

For more information, go to pastranastudio.com.