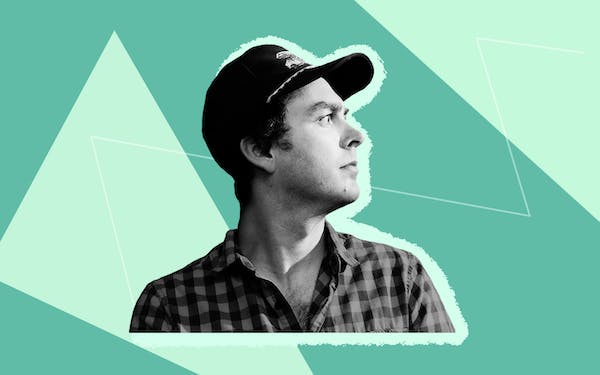 The Austin native talks making a beaded guitar for Shakey Graves—and how a skull on the side of the road helped him find his medium. 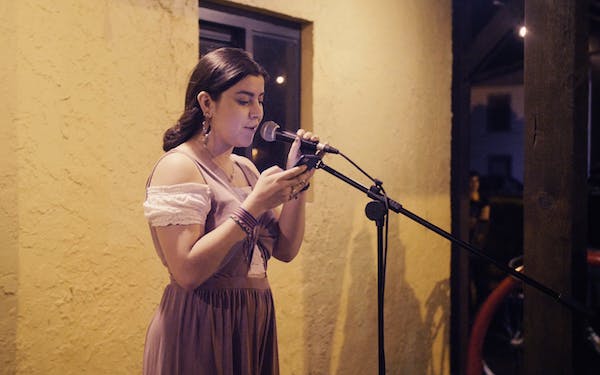 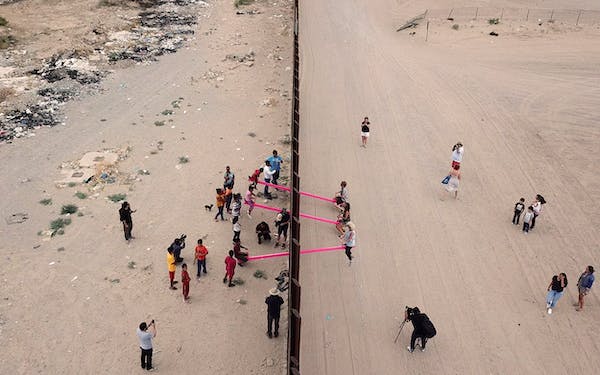 The creative duo recently went viral for the pink seesaws they installed at the border wall near El Paso. 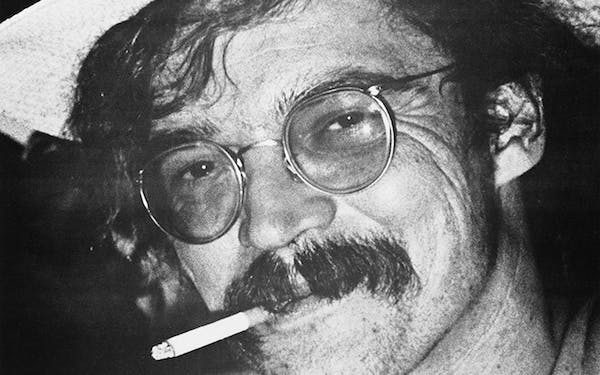 The Lubbock native talks about his trippy, blood-flecked radio plays, the border wall, and working with Jo Harvey Allen. 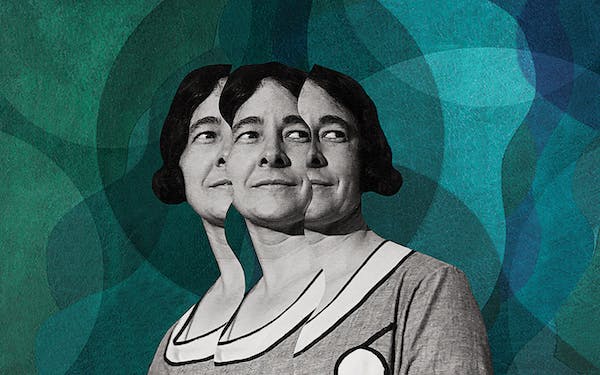 Georgia O'Keeffe's talented younger sister was forgotten by art historians. A new exhibit in Dallas aims to shed light on her work. 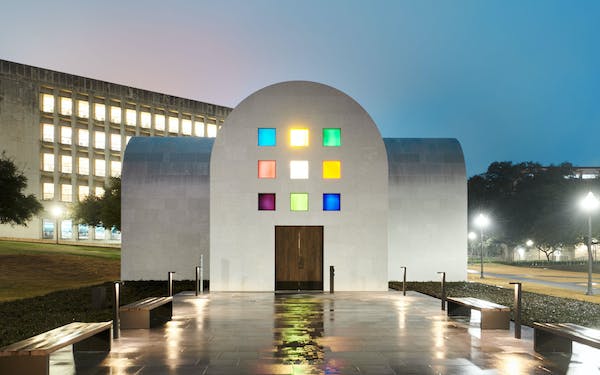 The debut of a destination showpiece on the University of Texas campus marks a turning point for the Capital City. 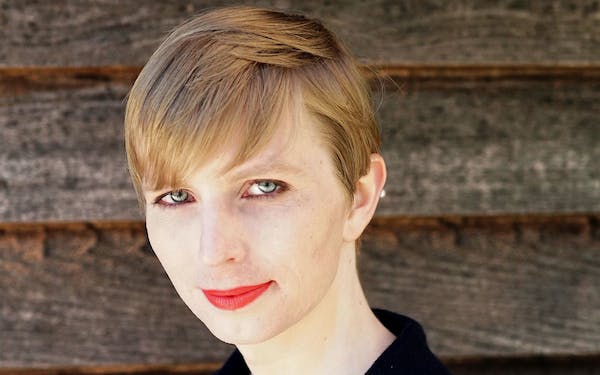 A summit on art and activism at Houston’s Day for Night festival pulled no punches. 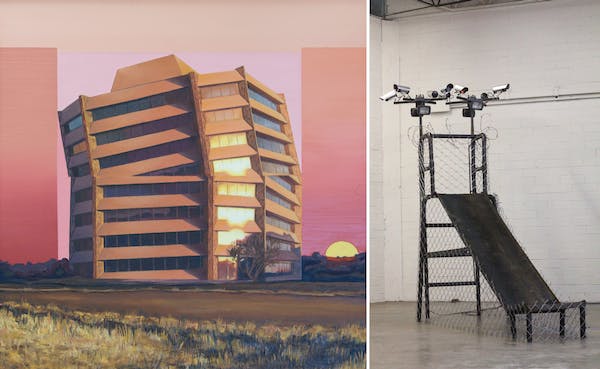 The 2017 Texas Biennial offers work from Texans around the state and across the border. 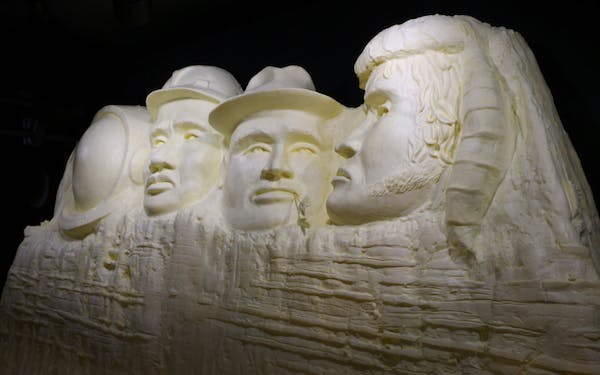 Ken Robison has been an artist for decades, but when he was asked to make the State Fair's butter sculpture, he got to use a new medium. 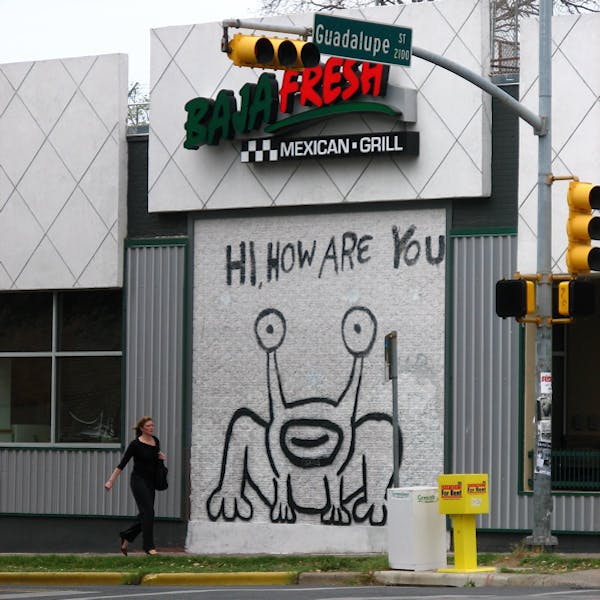 Murals at the intersection of Twelfth and Chicon on Austin’s East side were painted over recently, while famous images in the city’s tourist neighborhoods have become institutions. 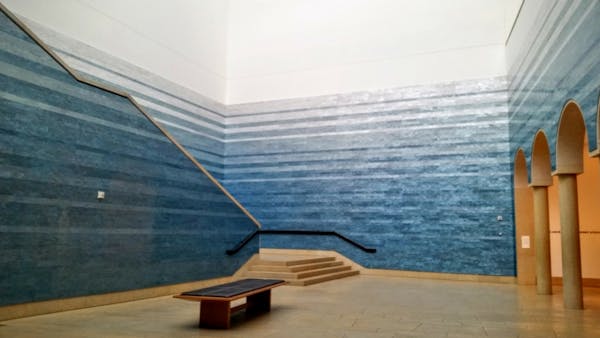 Flyers on the Wall

The 76-year-old Amarilloan gained international fame for funding the Cadillac Ranch art installation, which turns forty this weekend. But his legacy was tainted by sordid allegations of sexual abuse. 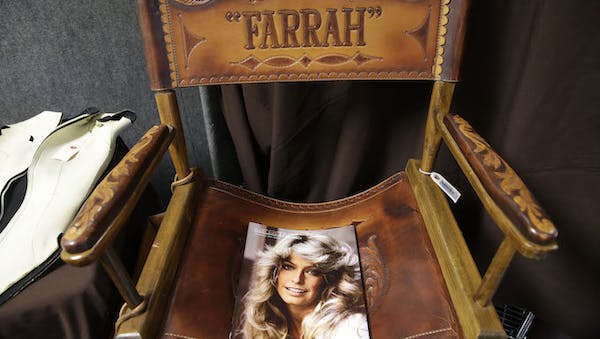 We'll never know who Farrah truly loved, but everybody has agreed that the painting belongs to Ryan O'Neal. 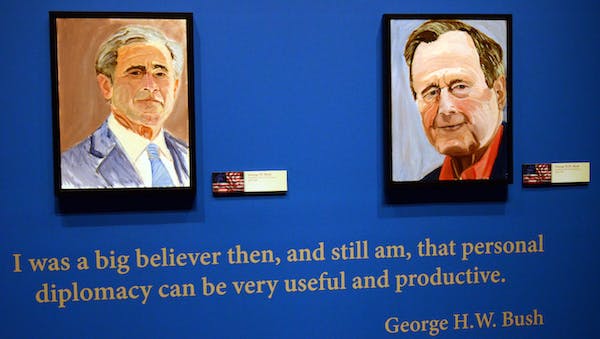 His "World Leaders" series of portraits opened last week at the George W. Bush Presidential Library and Museum, albeit to mixed reviews. What should the former President paint next? 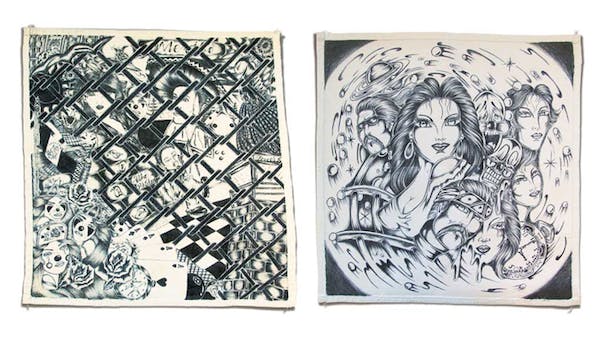 How Prison Art From Texas Captured the Art World’s Attention

Paños, small cloth swatches decorated with detailed illustrations by inmates, now hang in New York museums and are snapped up by worldly collectors.

What to see, hear, read, and watch this month to achieve maximum Texas cultural literacy. 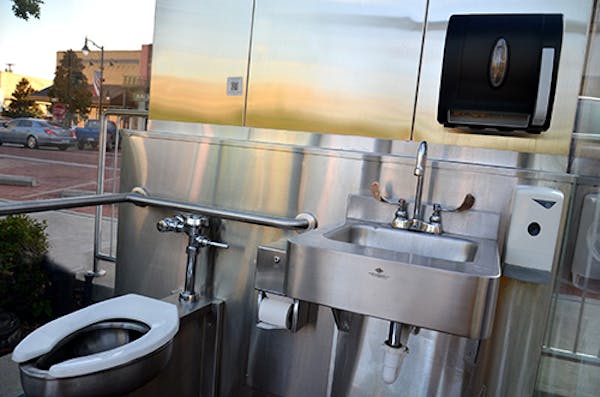 What's so special about the Northeast Texas town's facility? It's a room with a view. 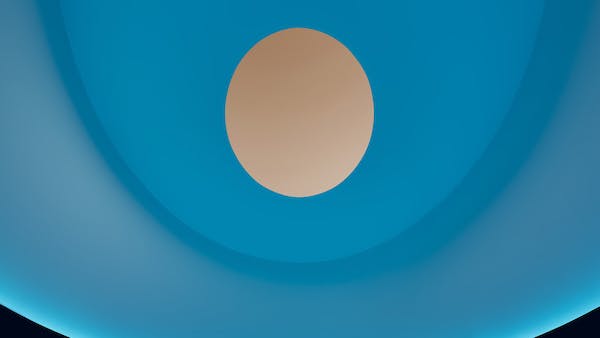 Turrell, now one of the most famous artists alive, has long captivated the attention of Texas's art patrons, bringing world-class art to the state's museums and universities. 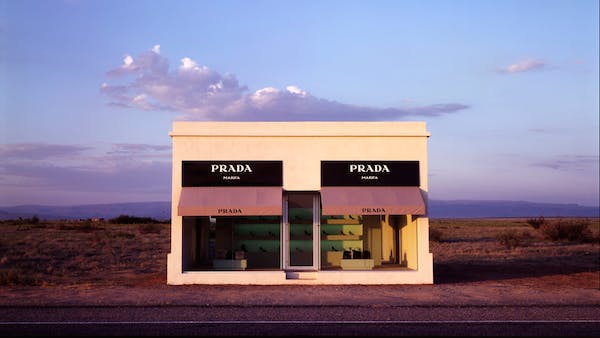 The dustup around Playboy's controversial art installation outside of Marfa revealed regulations that might require the removal of the famous Prada Marfa sculpture. 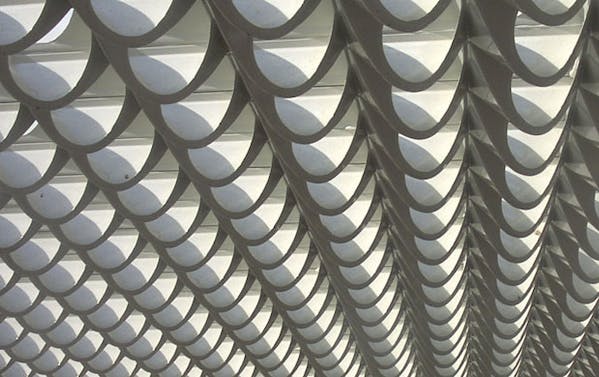 The owners of Museum Tower took out a full-page ad in the Dallas Morning News Friday to (sort of) apologize that the new building is so shiny. 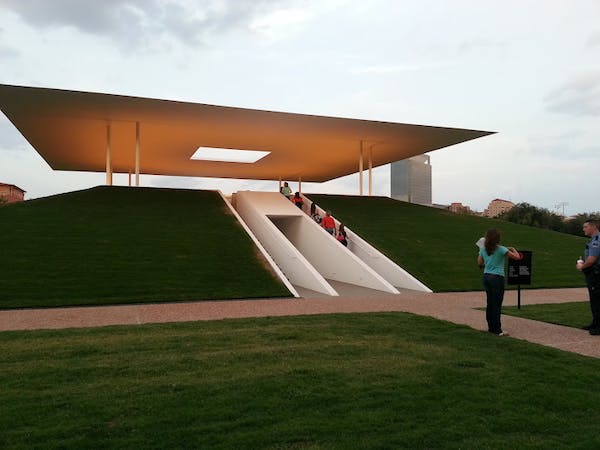 During a recent trip to Houston, I decided to make an early-bird dinner reservation so I could get over to the Rice University campus in time for the evening viewing of James Turrell's Light Epiphany. Open since June, the site-specific "skyspace" was commissioned to mark the university's centennial. The pyramidal structure has been outfitted with LED lights that Turrell has programmed to change in particular sequences—one just before sunrise, one just after sunset—in accordance with the solar calendar. Seeing as how the sun always sets on time, I didn't want to be late. As I hurried toward the structure (located next to the Shepherd School of Music), my first thought was that it looked like some sort of futuristic hover craft. I handed over the email confirmation I'd printed out (though free, reservations are required for the sunset show) and fell in line with the other visitors. Heading up the white staircase embedded in the structure's grassy slope, I felt like Roy at the end of Close Encounters of the Third Kind as he walked, willingly, up the ramp and into the mother ship. 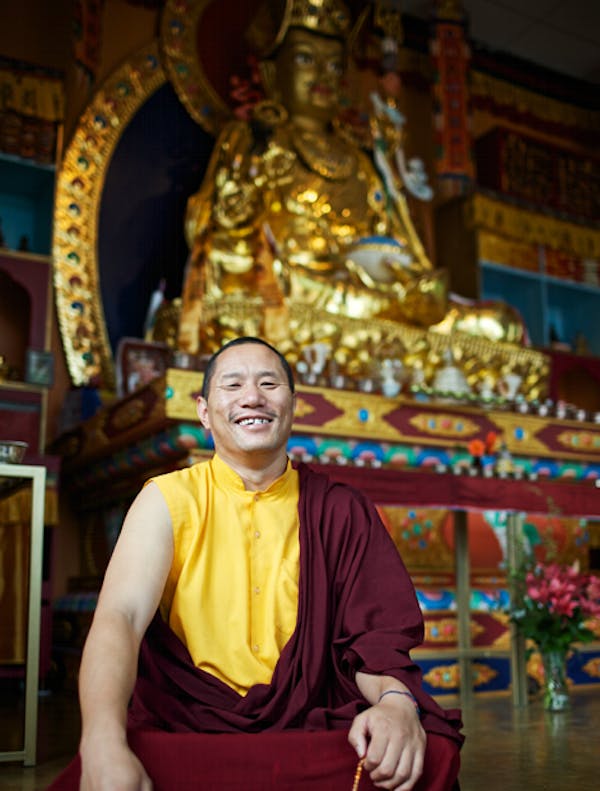 Finding Peace and Joy in Austin

How a rare statue in an unassuming temple made the capital city a place to seriously study Buddhism.

The conventional wisdom is that Republicans will pick up House seats in 2010, for two reasons. One is that the president's party seldom does well in the first off-year election (George W. Bush in 2002 being a notable exception). Another reason is that Democrats have to defend their recent gains in marginal seats in Republican districts. But I'm not so sure that the conventional wisdom is right. The Republican electoral apparatus is in shambles. Tom Craddick has directed every Republican legislative campaign since "76 in 96." I can't envision him playing that role in 2010, even though his personal campaign account has $2.12 million cash on hand and his Stars over Texas PAC has another $94,000+. What's the point? The slaves have been freed; they don't want him back as speaker. Many GOP members chafed at the tight control and micromanagement exercised by Craddick over their campaigns last fall; it was a factor in his downfall as speaker. More to the point, the Republicans lost seats in every election since Craddick became speaker. So the question is: Who will run the races? The Republican party is incapable and incompetent. ART, the Associated Republicans of Texas, was very effective in its heyday, but when a split developed in the organization over whether ART should engage in Republican primary races, ART's godfather, Norm Newton, left the organization. ART is no longer a factor. The efforts of the Patriot Group to form an umbrella organization for Republican elected officials suggests that the firm might be seeking to take control of the elections. Other consultants and activists might have their own ideas. TAB's Bill Hammond and lobbyist Mike Toomey oversaw the 2002 elections, but they did so under Craddick's aegis. Texans for Lawsuit Reform, a Toomey client, aligned with Craddick in 2008, but they supported conservative Democrats as well as Republicans, and their efforts were significant. Rick Perry loaned his campaign team to the Craddick effort last fall, without notable success. If Perry were to win his Republican primary race against Kay Bailey Hutchison in 2010, he and his team could organize a campaign, but if he loses, he'll have one foot out the door. In short, the infrastructure for a Republican campaign does not currently exist. 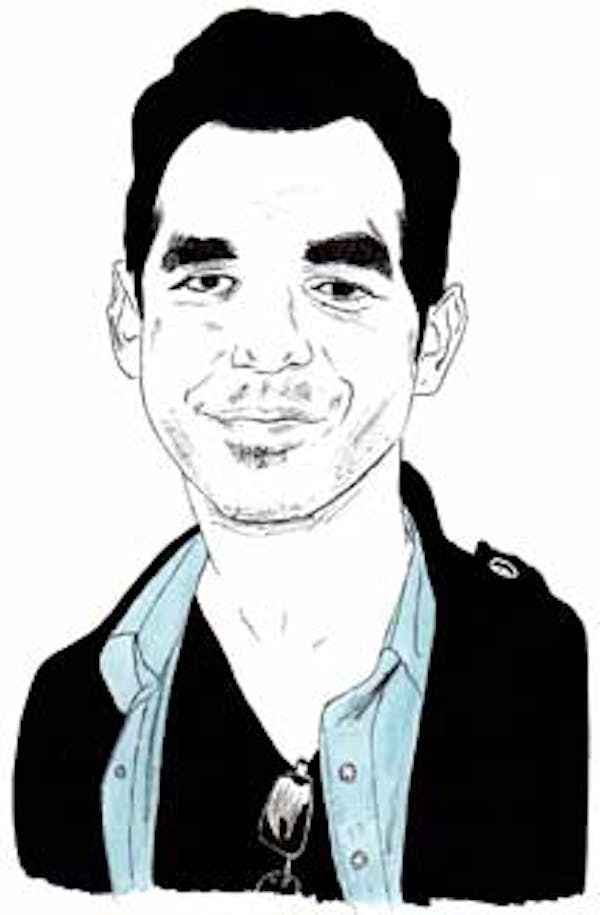 He did not grow up planning to become an artist: Robleto was captain of the football team at San Antonio’s Robert E. Lee High School and initially chose biology as his major at UT-San Antonio. But in 1993 he quite literally had an epiphany and turned to making art.

A brush with greatness.

Austin painter Julie Speed is the latest ascendant to the ranks of art royalty. Talk about a brush with greatness.

The Return of the Native

With a major retrospective of his work at three Houston museums, Robert Rauschenberg is once again the talk of Texas. What’s he been up to? A portrait of the artist as an old man.

The boom in “outsider” art that began in New York, Chicago, and Atlanta has finally come to Texas, driven by true visionaries whose images conjure worlds that may have never existed but are invariably inhabitedby penetrating psychological truths.

Good-bye to a Friend

He braved dangerous criminals, stalked wild wolves, waded into floodwaters, and chased a hurricane down the Texas coast into Mexico, but in a cruel turn of fate he was felled by a tiny insect. Photographer Doug Milner died November 13 after suffering an allergic reaction to a wasp sting at…

All is clam, all is bright in folk-art manger scenes.