Wednesday night, at The Little Nell hotel in Aspen, the Court of Master Sommeliers announced the latest class of master sommeliers to earn a diploma for passing what has been referred to as one of the world’s hardest exams. This year, there were seven who passed, one of whom was Texas’…

Texas Wine of the Month: Perissos Vineyard and Winery Aglianico, 2012 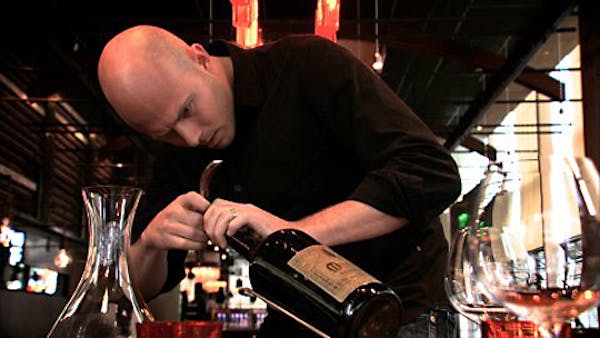 SOMM, The Movie, Lands in Texas

A riveting documentary on the great lengths to which professional sommeliers journey in experiencing the best in the world of wine revealing to the rest of us, just what all the fuss is about.

Secrets of the (Texas) Sommeliers

(Editor's Note: This guest post about last week's Texas Sommelier Conference comes from San Francisco food, wine and spirits writer Jordan Mackay, a James Beard Award-winning author for his 2010 book with Rajat Parr, "Secrets of the Sommeliers." But we knew him when!) At TEXSOM, if you were not in a suit and tie, you’d have been likely to feel underdressed. But that’s part of the culture at the Texas Sommelier Conference: everyone’s suited up most all the time. Yet, thanks to the fact that they’re tasting wine all day, they’re likely still having more fun than you. And when they’re not drinking wine, they’re drinking coffee. And when they’re not drinking coffee, they’re drinking Campari, which the bartender of the lobby bar in the Four Seasons at Las Colinas, where the convention took place, told me the hotel stocks up on before the conference. The thirsty, wined-out sommeliers likely drink as much of the red Italian aperitif (with soda or in Negronis), he said, as the hotel goes through the rest of the year. (Other preferred non-wine alcoholic beverages included Aperol and Fernet Branca, as well as mezcal.) The bulk of the conference is taken up with education. In-depth wine seminars ran constantly for two days as heavily credentialed experts discoursed from the dais on subjects like “Grenache around the World” and “Red Wines of Burgundy's Cote d'Or” to hundreds sitting quietly in the audience, taking notes and trying not to spill any of the eight glasses of wine they had lined up before them. And all the while this was going on, a crew of masters from the Court of Master Sommeliers, the premier sommelier training and certification organization in the world, was putting 23 young sommeliers through a grueling multi-day examination to determine the winner of the Texas Best Sommelier 2011. The ultimate champion, Bill Elsey, was crowned at TEXSOM’s concluding event, the Grand Tasting, at which dozens of invited wineries and importers poured their wares for all the convention’s attendees. TEXSOM is of particular relevance to me as, when I left Austin and Texas Monthly in 2001 to pursue my own interest in wine outside Texas, there were, to my knowledge, no dedicated sommeliers in Austin. I hardly knew what a sommelier was when I arrived in San Francisco later that year. Yet destiny led me to fall in love with and, in 2006, marry, a sommelier. Last year, I published Secrets of the Sommeliers. These days, as I learned at TEXSOM, Austin has several sommeliers, like the spirited June Rodil (who won Texas Best Sommelier in 2009) of Congress and the affable Mark Sayre of the Four Seasons (2007’s winner). Texas has long been an important place for wine, even if it wasn’t noted for its sommelier community. Rebecca Murphy, who was one of the first members of the modern sommelier profession in Texas, starting in Dallas in 1972, remembers there being no culture of the professional wine steward. “I was working by myself, figuring out how to be a sommelier on the job,” she said. Today Murphy writes periodically on wine for the Dallas Morning News and runs its wine competition