UPDATE: The Nominations Committee has approved all three nominees the UT System Board of Regents. The full Senate will take up nominations next. I walked in the east door of the Capitol yesterday with Senator John Whitmire. He asked if I was going to nominations. I said I…

In October 2012, I wrote a cover story about the battle over UT. That battle, which matched regents appointed by Rick Perry against the leadership of UT-Austin, has not abated. I’m going to discuss portions of Brian Sweany’s recent interview with regent Wallace Hall as well…

Today was the long-awaited meeting of the Joint Oversight Committee on Higher Education Governance. This was strictly an organizational meeting, and no members of the UT Board of Regents were present. But it was another front in the increasingly tense battle between the UT System Board of Regents and UT…

The university says that it cannot build and operate its proposed new medical school without a permanent source of funding. It is seeking an increase in local property taxes (amounting to $107.40 per homeowner for the average home), the revenue from which would help fund the medical school. Austin historically… 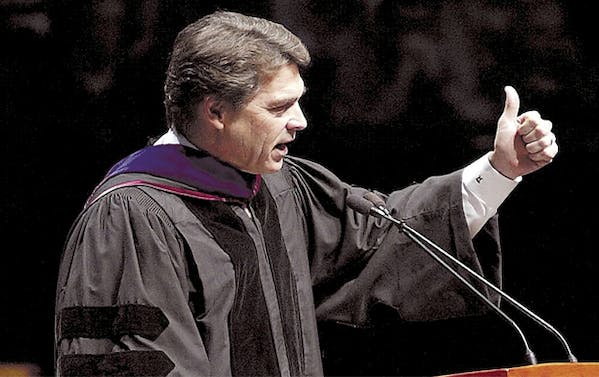 In San Antonio and then again in Austin, the governor addressed the controversy over the University of Texas at Austin president's position on tuition.

Texas A&M’s athletic department may be leaving behind the University of Texas, but they remain linked through academics.

A response to Michael Quinn Sullivan

Michael Quinn Sullivan has a bone to pick with me. I am the subject of a blog post by Sullivan published on the Empower Texans web site yesterday under the headline, “Texas Monthly: Disclosure-Free Zone.” Sullivan objects to the fact that in an April column about higher ed reforms, I did not disclose that I have taught at UT from time to time. Here are some pertinent paragraphs: Paul Burka, the “senior executive editor” at Texas Monthly has taken to defending the higher education status quo – skyrocketing tuition and a lack of transparency. He follows the administrative bureaucracy party line by deriding reformers, disparaging them and calling motivations into question. Couldn’t be because he has a financial interest in the status quo, could it? Mr. Burka received $10,159 in compensation ($9,295 in salary) for teaching 13 students. (NOTE: the numbers are from UT’s own data, which the institution says may or may not be valid or accurate.) He hasn’t disclosed in any recent writings supporting the higher-ed establishment that he is a “visiting lecturer” for the University of Texas, teaching a three credit-hour class – ironically titled “Right And Wrong In Politics.” Mr. Sullivan has a point, though he overplays it to a ridiculous extreme, as is his custom. I should have included a parenthetical statement in that April column saying that I had taught at UT on various occasions in the past (though I was not teaching there or receiving compensation at the time that I wrote the column). But it is far-fetched to suggest that I have any permanent attachment to UT, or a financial motivation to defend the university. I am not an academic, I am a journalist. Over the past twenty years or so, I have been fortunate enough to teach courses at UT (and also at St. Edwards). During that time, I have written several editorial columns about the university. One was supportive of tuition deregulation; one was critical of a watered-down degree program I referred to as “B.A. Lite” (this one, alas, is not yet available online). I have not tried to hide the fact that I teach at UT; in 2001, for example, I wrote about volunteering to evaluate applications for admission to the Plan II honors program, as I was eligible to do as an instructor. I have also written a skeptical column about the athletic department’s efforts to find a home for the Longhorns after the breakup of the Big XII conference. In short, I choose subjects that Texas Monthly believes are important, and I try to call ‘em as I see ‘em. I leave it to readers to judge for themselves whether they believe that my reporting on UT is influenced by what Mr. Sullivan refers to as my “financial interest in the status quo,” or whether it reflects my strongly held personal belief in the importance of allowing state universities to pursue excellence free of political interference.

Shapleigh: “In my view you miss the point.”