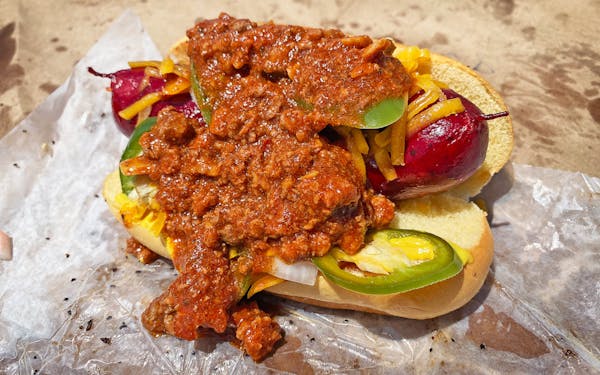 Inspired by a childhood favorite, the wieners are a welcome addition to the menu of the Austin joint, especially when served with chili. 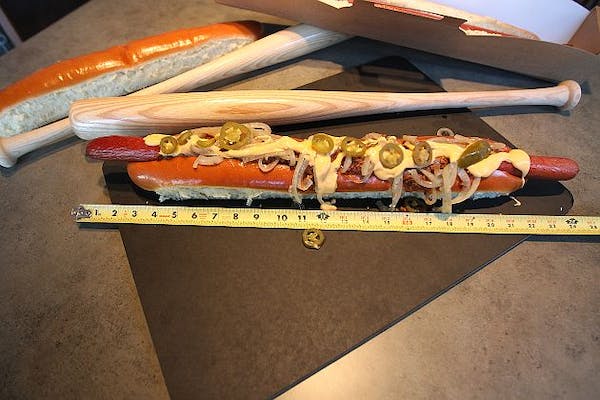 That terminology is team president Nolan Ryan's own description of the Ballpark at Arlington's new one-pound, two-foot long, $26 chili-cheese dog.

Attention Dallas foodies: Bowery – an upscale hot dog restaurant on McKinney Avenue – is opening its doors to the public today. The restaurant’s menu includes a host of American classics, such as an upscale Korn Dog and a spicy Chili Kicker, with a number of global renditions…

It wasn't chili dogs that brought me to Dogello's on yet another 105-degree day in Austin. It was coffee ice cubes. Joe Holland's trailer in the parking lot of Freewheeling Bicycles was formerly The Good Bike coffee stand, so when he opened up in January, he kept serving their signature Cuban coffee for existing customers. Hot or iced, he now makes it with Third Coast Italian espresso and cane sugar, French pressed all together and then mixed with 2% milk. I don't take sugar in my coffee ever, so I found it a bit sweet, in a dessertish Frappucino/Thai iced coffee sort of way. Fortunately, regular unsweetened coffee's also on the menu. The coffee ice cubes not only keep the drink at full flavor and strength, but melt more slowly. "Over time it turns into almost like a slushy for adults," says Holland. A Los Angeles native, the 47 year-old Holland has lived in Austin since 1999, working for various software and e-commerce start-ups. When his last job ended in November, he finally said, "I’m going to do this thing which surprisingly has been my dream." That dream: to make the perfect chili for the perfect chili dog, inspired by his favorite LA franchise Cupid's, which has been around since 1946

Who cares how the sausage gets made? We’re back in Austin this week, and Man Bites Dog’s beef franks, brats, and sausages are so scrumptious that you’ll soon find yourself shoveling them in as if you’re part of a one-man hot dog eating contest. The front-runner was…