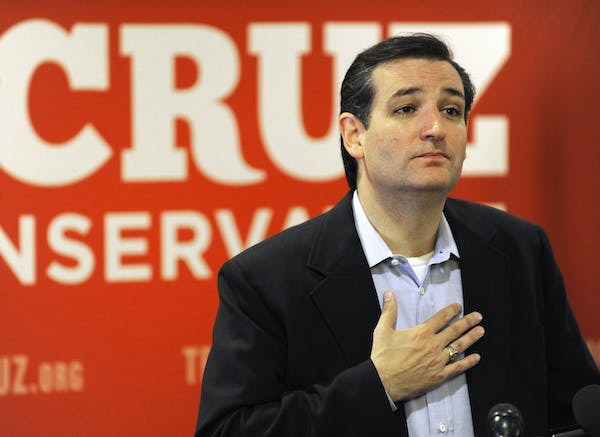 Cruz cruises, Wendy Davis holds on, Pete Gallego scores an upset, Karl Rove gets cranky, and six other election highlights from around the state and country. 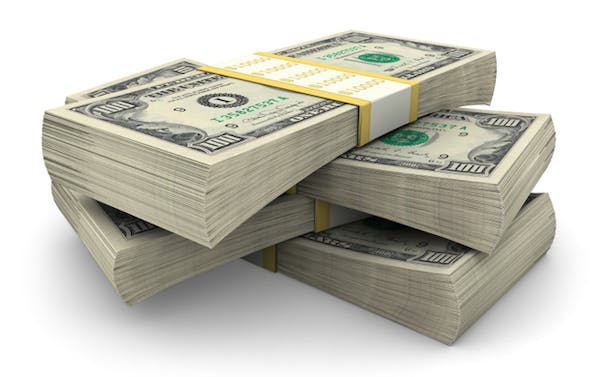 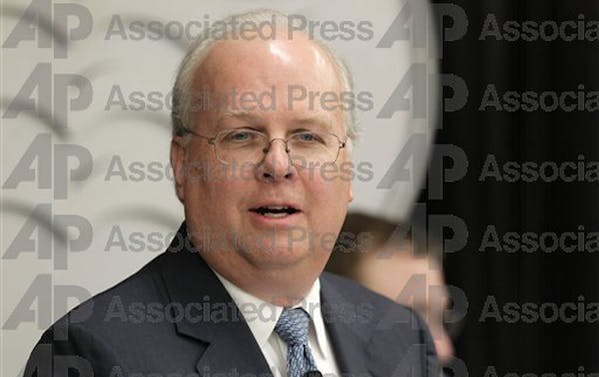 Karl Rove's American Crossroads super PAC has placed a $1.7 million ad buy in six swing states in the wake of Rick Santorum's depature from the race. 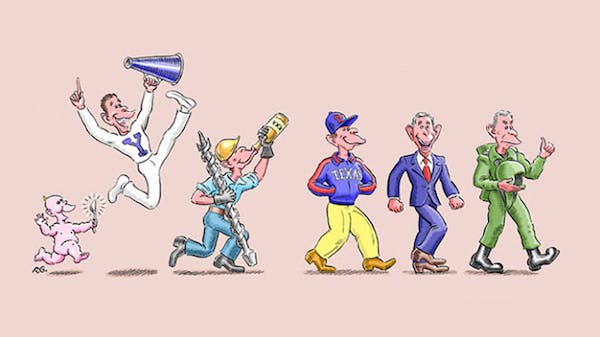 5 Things You’ll Be Talking About in September

1. “Goodbye to texas university . . . Hello to the University of Louisiana State?” The trash-talking for Texas A&M’s first-ever Southeastern Conference game got off to an early start in May, when University of Florida head coach Will Muschamp took a shot at Aggieland. “You ever been to… 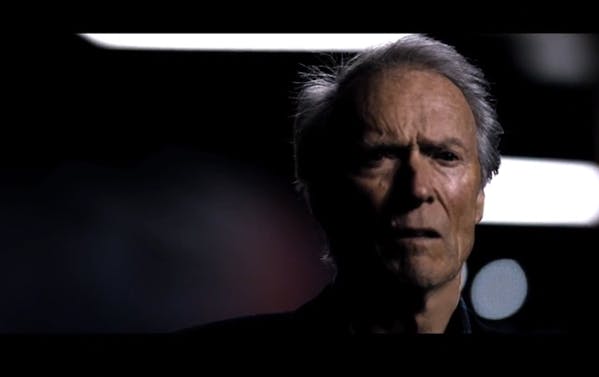 Homegrown film director David Gordon Green and three writers who studied at the Michener Center made up the creative team behind "It's Halftime in America" commercial. 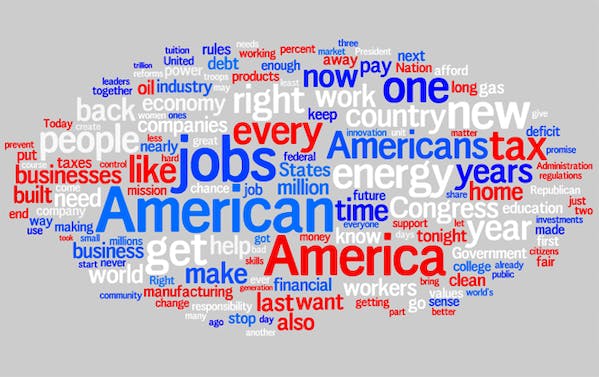 How Drunk Would You Have Been If You Played Karl Rove’s SOTU Drinking Game?

Rove said that if State of the Union watchers drink every time President Obama said the phrase "middle class," then "we're going to have a lot of drunk people in America." Was he right? 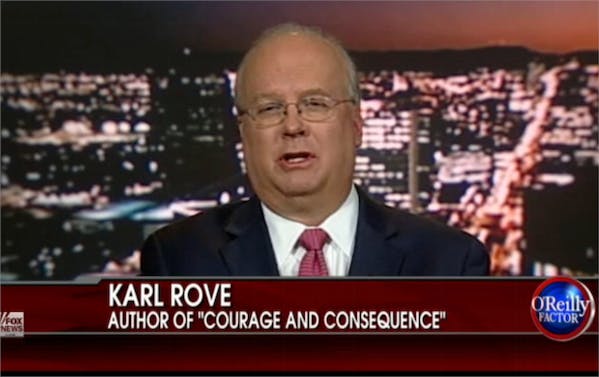 Karl Rove Has Reinvented Himself as a Powerful Fundraiser

Since leaving the Bush White House, Karl Rove has become “the dominant private citizen in the Republican Party,“ according to a new profile in the New Republic.

I misinterpreted an e-mail that I received from Allbaugh, which I discuss below. Allbaugh was forwarding an article from Huffington Post by Howard Fineman. The headline of the article was highlighted in the e-mail: “Karl Rove created Rick Perry–Now can he stop him?” The rest of my original post…

Wayne Slater has an interesting story [this was earlier in the week] — which I am unable to link to, but it is in the Quorum Report — about Karl Rove’s displeasure with Rick Perry’s lack of gratitude toward then-Governor Bush during the 1998 primary races for governor and lieutenant…

Dick Cheney to campaign for Hutchison

Is this good or bad? This is a guy who left office with a 19% approval rating. The report comes from the NBC affiliate for the Metroplex: The battle for conservative credibility in the GOP race for governor just got interesting. Former Vice President Dick Cheney, an outspoken critic of…

A conversation with Karl Rove

He was in town having lunch with a friend and I had the opportunity to visit with him. He said that he expected to finish his book on the Bush Administration in the next week or so, and it would be on the spring list. He was very interested in…

Today’s Wall Street Journal carries an article by Karl Rove, who defends himself against allegations that he improperly intervened in the firing of U.S. Attorneys and in the prosecution of Alabama governor Don Sieligman, which Rove attributes to the New York Times, the Washington Post, and congressional Democrats.

Can’t Anybody Here Play This Game?

Baseball aficionados may recognize the headline as the title of a book by Jimmy Breslin about the 1962 New York Mets, lovable losers of 120 of their 162 games. I was reminded of the book — the title was a quote from Mets’ manager Casey Stengel — by the astonishingly…

RNC chairmanship update: Rove favorite has the inside track

Stu Rothenberg has a piece about the six-way race for chairman of the Republican National Committee in Real Clear Politics today, which he says is too close to call between frontrunners Michael Duncan, who is seeking a second term, and former Maryland Lieutenant Governor Michael Steele. Rothenberg gives…

This was the question at a debate sponsored by NPR. Click here for the transcript and the broadcast. Debating for the affirmative: Simon Jenkins, a columnist for the Guardian and the Sunday Times, and Jacob Weisberg, chairman and editor-in-chief of The Slate Group, an online publishing group owned…

This is politicalwire.com’s quote of the day for Monday, citing the Austin American-Statesman as the source for Rove’s remark: “I’ve got behind-the-scenes episodes that are going to show how unreceiving they were of this man as president of the United States. I’m going to name names and show examples.” I… 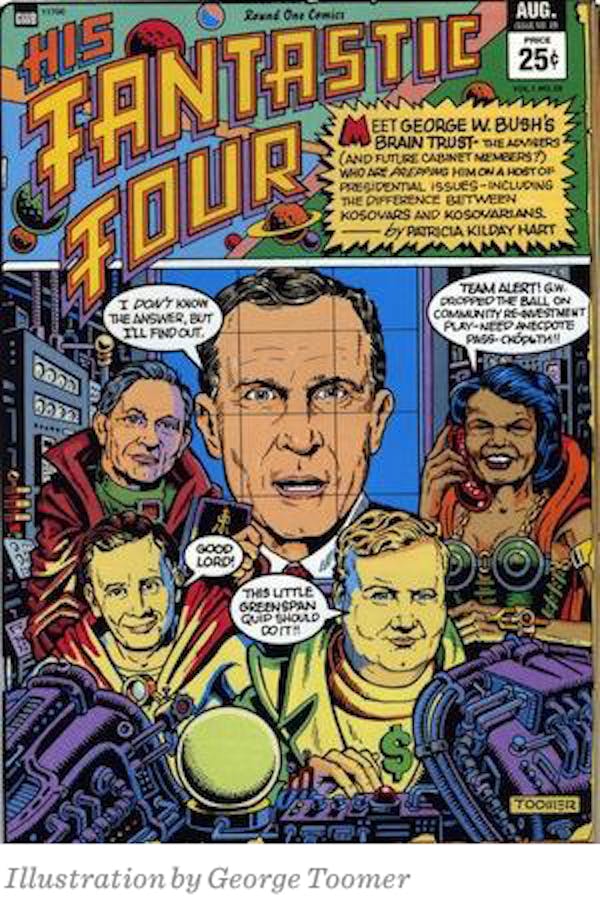 Meet the superheroes of George W. Bush’s campaign for the presidency: a quartet of brainy advisers who are helping him to refine and sell his ideas on the economy, foreign policy, and the like.

How to spend a huge budget surplus will be the defining issue of the coming legislative session. It will also determine the political futures of George W. Bush, Rick Perry, and Pete Laney.

Brother, Can You Spare Some Dimes?

George W. isn’t the only Bush benefiting from the largesse of well-heeled Texans. His brother Jeb Bush, the GOP candidate for governor in Florida, has thus far received more than $382,000 in contributions of $500 or less from Texans. Among the notable donors: financier Perry Bass, oilmen W. A. “Tex”…

Why the state’s tobacco settlement has ignited a controversy. 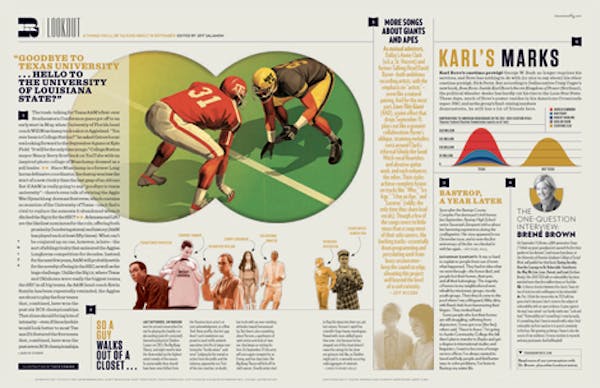 1. “Goodbye to texas university . . . Hello to the University of Louisiana State?” The trash-talking for Texas A&M’s first-ever Southeastern Conference game got off to an early start in May, when University of Florida head coach Will Muschamp took a shot at Aggieland. “You ever been to College…