Apple of Our Eye

This is no pie-in-the-sky. This is the real thing. 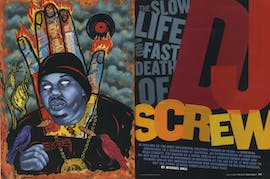 The Slow Life and Fast Death of DJ Screw

He was one of the most influential cultural figures in Texas—a generous godfather to a generation of rappers, an entrepreneur of Houston's mean streets, the master of a scene fueled by codeine cough syrup and hip-hop beats. When he overdosed in November at the age of 29, it was easy…