Though there are concerns that this small coastal town on the northern tip of Mustang Island has become too charming (read: teeming with tourists), I’m happy to report that it still feels as laid-back as the isolated fishing hamlet it once was. Whether or not you intend to cast your own lines, I bet you’ll be hooked by Port A’s seaside charms—and plentiful seafood platters—just as I was, which I cop to in my August 2014 column.

Farley Boat Works // Established in 1915, this local boat-building operation was resurrected in 2011 as a BYOB—that is, “build your own boat”—school. You don’t have to be a master woodworker to learn how to construct your own watercraft, but you will need to devote several weeks to the endeavor (classes book up well in advance). It is worth at least stopping by for a tour of the sawdusty space, though, to learn more about the late founder Fred Farley’s signature skiffs. (Open Thursday to Sunday.) 716 Ave C, 409-356-5065, facebook.com/farleyboatworks

Leonabelle Turnbull Birding Center // A 25-foot observation tower offers panoramic views of the marshy home of dozens of migratory species (roseate spoonbills, black-bellied whistling ducks, and egrets among them) as well as two resident American alligators, Boots and Bags. Gather at the boardwalk on Wednesdays at 9 a.m. for a free guided tour. And don’t forget your binoculars. At the south end of Ross Ave, behind the trolley stop, 361-749-4158

Port Aransas Museum // Open from Thursdays to Sundays, this early 1900’s house is now home to a variety of relics from the island’s past, like the striking Fresnel lens that once projected light from atop the Lydia Ann Lighthouse. There are also nods to Port A’s present, like a fascinating chart of the town’s growth titled “Boom Or Healthy Growth…You Be the Judge.” A friendly docent directed me to a computer loaded with images so that I could browse aerial shots of the Bass family’s private compound on San José Island; it may be the closest thing to an invitation I’ll ever get. 101 E. Brundrett, 361-749-3800

San José Island // This 21-mile-long barrier island just north of Port Aransas is owned by the Bass family of Fort Worth, but thanks to the Open Beaches Act, anyone can enjoy its shores. The Jetty Boat, a small passenger ferry, makes ten round-trips daily ($12 a ticket) from Fisherman’s Wharf, so you can load up your fishing gear and picnic supplies (there are carts available to rent) and head over for a respite from the more crowded beaches in Port A. Serious anglers head straight for the pink-granite rocks of the North Jetty, while beachcombers troll for seashells. Camping is allowed too, just keep in mind there’s nary a public structure, and you’ll need to pack out what you pack in. 900 Tarpon, 361-749-5760

University of Texas Marine Science Institute // Bring the kids to the oldest and most significant marine research facility on the Texas coast to learn more about what lies—and lives—beneath. 750 Channel View Dr, 361-749-6711

Back Porch Bar // If a waterfront live-music venue that offers cold longnecks and free Wi-Fi to everyone from “beach bums to billionaires” sounds like your ideal vacation spot, well, you’re in luck. 132 W. Cotter, 361-749-2800

Kody’s // This elevated wooden dive has a mini-golf course out front, daily specials (an eight-ounce Big Daddy Burger on Thursdays, pork pot roast on Sundays), and a kitchen that doesn’t close till one in the morning. Both the fried shrimp basket and the grilled shrimp tacos were bliss, even if the patrons puffing away on cigarettes nearby were not. 2034 Texas Highway 361, 361-749-8226

Trout Street Bar and Grill // With a front-row view of the yachts bobbing in the water off the back deck, I was a happy camper. I was also a happy eater, with a plate of grilled shrimp and rice, and a small plastic cup of melted butter, which I polished off just as the sun melted into the watery horizon.104 W. Cotter, 361-749-7800

Virginia’s On the Bay // Full disclosure: We picked this place for its location, right next to the harbor, and its breezy, open-air ambiance, so the attentive service and festive presentation—my Cajun popcorn shrimp salad was served in a giant plastic clam shell—were welcome bonuses, even if the food itself didn’t quite keep pace. 815 Trout, 361-749-4088

The Gaff // You may not know it yet, but this pizza-serving, pirate-themed bar, which hosts chicken-shit bingo and belt-sander races, is exactly where you want to be. 323 Beach, 361-749-5970

A Mano // By the time you leave this expansive shop, you may very well have both your manos full with bags filled with hand-blown glasses, Talavera pottery, brightly embroidered dresses, and other artisanal wares that the proprietress brings back from colonial Mexico. 1726 Texas Highway 361, 361-749-1828

Cita Resort Interiors // If I ever get an itch to redecorate my house in a nautical theme, this home goods and furniture store will be an excellent starting point—think wicker living room sets, bamboo chairs, and mermaid statuary. There’s also a small but appealing collection of beach totes and cover-ups, if you’re looking for something more sophisticated than what the kitschy souvenir shops have to offer. 129 N. Alister, 361-749-2711 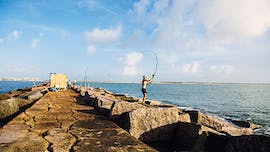 Hooked on a Reeling 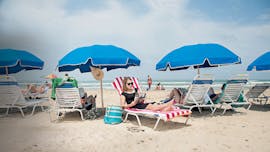 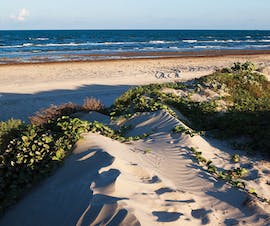 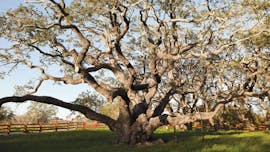 A Summer Weekend in Rockport