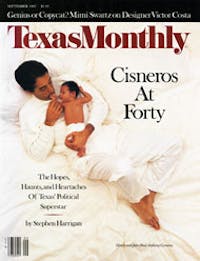 The battle over the recently passed Texas budget was one of the fiercest political fights in memory, replete with name calling and bitter accusations. But when it comes to feuds, no Texas political figure carried a vendetta further than J. Evetts Haley, a conservative Democrat of the old school who took on no less a personage than Lyndon B. Johnson. Eight years after Haley ran for governor (and lost) in 1956, Johnson was running for president, and Haley used the occasion to publish an incendiary book attacking Johnson. It was the most controversial book ever written about a Texan, and although it fell quickly into obscurity, it became a cause célèbre of the 1964 election

Titled A Texan Looks at Lyndon: A Study in Illegitimate Power, the 254-page self-published paperback–Haley says no publishing house would touch it–portrayed Johnson as a vain and vicious man whose climb to the presidency was wrought with malevolence on every rung of the ladder. Haley quoted with obvious relish a description of the National Youth Administration, of which Johnson had been a state director, as “a disloyal, subversive organization, under the domination of Russia.” He contended that Johnson was a congressman who supported farm programs “conceived by the Communist cell in agriculture.” He alleged that as vice president, Johnson “accepted second place for money.” In his most outrageous claim, Haley insinuated that Johnson was involved with the Kennedy assassination. The problem was that Haley’s polemic lost touch with reality. While he made some good points about Johnson’s shadowy dealings–such as the peculiarity of 202 of his South Texas supporters voting in alphabetical order in the 1948 Senate race–they were buried waist deep in rumormongering and mad-dog ruminations.

The initial press run of 100,000 copies caused little hubbub. But as the presidential campaign heated up, sales skyrocketed. By the time of the Democratic National Convention in Atlantic City in late August, sales were averaging 50,000 a day, mostly in bulk orders–at thirty to fifty cents a book–from the John Birch Society and the Goldwater for President clubs, which hoped the book would swing close states to Senator Barry Goldwater of Arizona, Johnson’s Republican opponent. At almost 7.5 million copies, A Texan Looks at Lyndon had become the best-selling book of any kind in the country and the most successful political book of all time.

In the campaign’s final weeks counter-attacks on Haley and his book began in earnest, many of them written by Johnson’s supporters, such as his special assistant Bill Moyers, and nationally syndicated columnist Drew Pearson. Some of these adversaries offered choice diagnoses of the author’s problem. “A case of unhospitalized paranoia,” declared A.C. Greene in the Dallas Times Herald. Jim Mathis, a volunteer for the Democratic National Committee, wrote a widely reprinted article that spoke of “the festering climax of Haley’s fantasies.” (Mathis, incidentally, was the son-in-law of George Brown, a co-founder of the giant construction company Brown and Root. The firm’s unwholesome financial relationship with Johnson had been chronicled by Haley in some detail.)

As the backlash peaked, newsstands around the country refused to carry the book, airport authorities ordered it removed from terminals, and even the Republican National Committee publicly rebuked it. In the end, the tract caused Johnson little political damage; his election captured what was at the time the greatest popular majority in history.

Historians today dismiss the polemic as a venomous propaganda piece, an eruption of the old renegade streak in Haley’s nature that got him leveraged off the University of Texas staff in 1936 for being, in essence, too outspoken and too right wing. The book tarnished his well-regarded reputation as the author of many frontier histories and biographies, including the classic Charles Goodnight: Cowman and Plainsman.

Haley is now 86 and unrepentant. When he’s not tending his ranch, he spends most of his time in his Midland office and library. He maintains that the book’s allegations must have been true or he would have been sued for libel. And he resents that he is seldom cited in the dozens of Johnson biographies that have appeared since 1964. “‘Course,” he says with a sharp-edged crackle, “everybody wants to write about the sonofabitch now that he’s dead.”

William A. Adler is a freelance writer who lives in Austin.