Karnes, who grew up in Fort Worth, earned art history degrees from the University of North Texas and Texas Christian University. She has worked at the Modern Art Museum of Fort Worth since 1989.

This is my twentieth year at the Modern, and I still get the question, What is a curator? Traditionally it meant “caretaker of the objects,” but now, in the context of a modern art museum, it’s the person who has the idea for an exhibition, negotiates to borrow artworks, arranges how those pieces will be displayed, and writes the accompanying catalog, which requires a lot of research. In a way, being a curator is analogous to being a lawyer. You have to pick an argument about a certain artist or group of artists and try to convince viewers of that argument.

For example, I’m currently working on a big show featuring the young American painter Barnaby Furnas. This exhibition, which will open in 2012 and be called “States of Glory,” aims to prove that he’s one of the best artists of his generation. Some of his abstract paintings are only five strokes on a gigantic canvas, which is a scary thing to do, considering he’s coming several decades after the Abstract Expressionists. His historical subject matter is interesting too, because he picks figures—Civil War soldiers, Abraham Lincoln, John Brown—who are heroes but have some tragic aspect to them. He’s really bold.

The Modern’s chief curator, Michael Auping, always reminds me that you can only do so many shows in your career, so each one needs to be something you absolutely want to do. I keep a lot of files on artists, and when I’m convinced one is worth pursuing, I arrange to see his or her work in person. I try to go to New York twice a year and the West Coast at least once a year, and I go to the biennial international art exhibitions—there’s one in Venice—because I get a lot of mileage out of those. I also get leads from artists I’ve worked with, and I do a ton of studio visits. On average it takes three or four years to put a show together, so it’s a challenge to stay fully engaged, but I don’t get tired of these projects.

The Modern has about 53,000 square feet of gallery space, and it usually takes a minimum of fifty works to fill one floor. Because somebody owns each piece of art, there can be a lot of negotiating—and paperwork—to get the ones we want. Most collectors feel a responsibility to the artist to let his or her work be seen, but there have been times when I couldn’t convince someone to lend us something.

There’s an empty office upstairs that we call the “war room,” where we have huge floor plans of each gallery laid out on tables. The preparators make scaled-down maquettes of each piece of art, and I move those around to figure out how they should be arranged. But even though I know the ambience of the space and the works intimately, the arrangement always changes when the art arrives and we unwrap everything. Then I’m pacing around the galleries, looking at each piece, thinking, How should I move it around? How can I make it better within the exhibition? And maybe there’s a work that can’t be opened until its courier arrives to watch as it comes out of its crate and is hung on the wall, which means I can’t change my mind later on. So that’s part of the puzzle too.

I’m an anomaly in the curator world because I’ve spent my whole career at the same museum. I grew up going to the Modern, but it wasn’t until my mother took me to Italy when I was twelve and we went to the museums in Rome, Florence, and Milan that I realized how much art reflects the time, history, and culture of a place. Then, when I was in high school, I went to Holland as an exchange student. I explored the city of Lei-den, which is Rembrandt’s hometown, and all these great museums, like the Rijskmuseum, in Amsterdam, and I knew, “All right, when I go home, this is what I’m pursuing.”

Now, I had no idea what that meant in terms of a job, but after pursuing an art history degree in college, I found a position as the receptionist at the Modern. I worked my way up to research assistant and then took over as registrar, which meant that, much like a school registrar keeps track of each student, I had to keep track of each object. So if somebody wanted to borrow one of our Anselm Kiefers or Andy Warhols, I had to accompany the artwork wherever it went. It was the coolest job on the planet; we had very active loans, so I saw much of Europe, the U.S., and Mexico. Still, what I really wanted was to be a curator, so I decided to get a master’s degree in art history. Slowly but surely, I was promoted to assistant curator and then to associate curator and finally, in 2005, to curator.

Two of the pieces I’ve helped acquire for the permanent collection have become especially popular. One is Kehinde Wiley’s Colonel Platoff on His Charger. It’s of a young, urban black guy who has replaced the original sitter in what looks like an eighteenth-
century equestrian portrait. I think one of the reasons it’s a favorite is because a lot of high schoolers and college students relate to the young man. The other is Sharp’s Rifle Shop, by Rosson Crow, who is a darling of the art world right now. She’s painted things that you recognize, like cabinets that hold guns, and combined them with sprays and drips of paint all over the canvas, so that it looks like a fireworks display. People respond to it because it’s so energetic—it’s one of our largest paintings—but also because she’s from Texas.

Both Wiley and Crow have been the subject of a “Focus” exhibition, which is a small show I put together three times a year to feature different emerging contemporary artists. For many, this is their first solo museum show, and it’s my job to help them edit their work; I’ll look at, say, a hundred pieces and choose the ten that should be included. In December we’ll be featuring Erik Parker, a San Antonio native who creates these funky, tragic portraits in bright colors. They usually include a phrase—“Why me?” or “Player hater”—that is a satirical commentary on our culture. It’s satisfying to work with artists like Parker who are young in their careers. You don’t know where they’re going to be in ten years, but it’s exciting to know that you could be a stepping stone for them along the way.

Share
Tags: The Culture, Working Life: Stories from the 9 to 5, Fort Worth, Modern Art Museum of Fort Worth 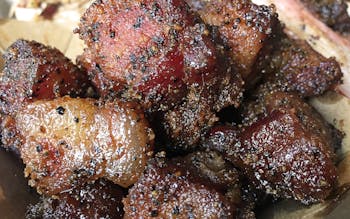