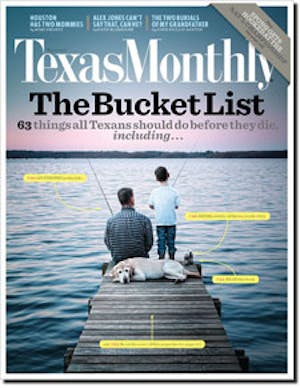 Espinosa, a lifetime Houstonian, has been serving legal papers—summonses, subpoenas, complaints, writs—to people facing court action for the past sixteen years. He is an owner and the director of civil process at Court Record Research.

I kind of fell into this. Around 1989, I had picked up a job with a small company that did a lot of mortgage work. As I learned the mortgage and title business, I was always at the courthouse, and I met a guy there who asked if I wanted to be a process server for him instead. Process serving was becoming real common in Houston, and there was money to be made: A lot of the city’s attorneys didn’t want to use constables to serve people papers because process servers are, shall we say, more easygoing. Constables also often knock on someone’s door and, if no one answers, just leave, whereas process servers are more like investigators. We track people down—knock on doors, talk to neighbors, verify that the person in question actually lives there so we can come back and serve him.

In some states it’s easy: You get the papers, get the address, and just serve someone, whoever is at the house. But in Texas, because there are so many lawsuits filed every year, you have to personally hand-deliver papers to the specific person. If you can’t track him or her down the first time, then you make several more attempts. After that, you go before the judge, submit an affidavit and a motion and order, and the judge signs it; only then can you go back and just post the papers on the person’s door. So you’ve really got to have some motivation and street smarts and the knack to get yourself out there.

Any tactic to make someone come to the door—acting as a courier, delivering flowers, disguising myself as a UPS driver—that’s what I’ll do. One time I was trying to serve a realtor and couldn’t ever get ahold of her, so I pretended to want to buy a house. She met me and I went through the whole bit, then all of a sudden popped out the paper and said, “I’m here to serve you.” Another time, I’d done everything to get into this gated community when finally I noticed something on the ground. It was an invitation to a kid’s party, and it happened to be at the house of the man I was looking for. This was a huge case—I think it was about oil leases and mineral rights—and I had spent three months trying to serve him. So I went up to the gate carrying a pizza. There was actually nothing in the box; it was just me in a hat. I told the security guard I had a delivery, and he let me in. It was nothing. I knocked on the guy’s door and said, “I’ve got a delivery for so-and-so,” and when he opened it, I pulled the paper from my back pocket. He looked at me like he wanted to hang me.

It can definitely be dangerous. I’ve served documents in drug-infested neighborhoods late at night and had guys say to me, “Who are you looking for? I can help you.” I’ve had to bribe them just to get out of there. Or I’ve been to rural spots up in the Huntsville-Conroe area, for example, where it’s just a big house on a piece of land with trees everywhere, and in so many words I’ve been told, “A person could get hurt out here in the middle of nowhere.” As a process server, I have no authority to carry a gun, so it’s just me protecting myself. I’ve been doing this for so long that I guess I’ve learned to deal with it.

Child-support papers—that’s where it gets real evasive. These people don’t want to be found. Even if the guy you’re looking for is there and you can show a picture of him, he will sit there and lie to your face. There are times when it takes two or three months to locate someone because he jumps from house to house or apartment to apartment. Once a person signs a lease, though, there is usually a credit report, so when we check that report, we know he’s moved again and eventually track him down. When I finally find whoever it is, I always try to explain that I’m just the middle person, that I have nothing to do with the case. It’s better for you to accept the paper now because it’s going to look bad when I post it to your door.

A lot of people are falling into this business nowadays because jobs are so hard to find. They’ll get certified so they can supplement their income while they’re looking for work. You can make some decent money: Here in Houston, I get paid $65 to serve an individual, and if it needs to be done more quickly, I bump it up an extra $25. Right now we’re serving a bunch of cases involving Hurricane Ike damage, and we do about a thousand papers a month simply on that. A few months ago I went to serve two different companies in Austin for several Ike-related cases, and we charged a substantial amount just for our drive over there. To be a process server, there’s an eight-hour course you sit through every three years. You take the test, get a background check, and then you’re given a Texas Supreme Court number to start serving papers. It’s not rocket science, but you do have to read a lot. I’ve read all of the Texas Rules of Civil Procedure so that when I work with lawyers I know what I’m talking about.

The best reply when I track someone down is when he or she says, “That’s it. You finally got me.” It’s satisfying, especially when you know it means that you’ve been able to get someone else their money. I remember one case, a family deal with four brothers, in which I was doing business for the younger ones. The father had passed away, and the older two were leaving the mom with no money. I served them at the airport as they were heading to Disney World with their families; I caught them on the elevator right before they were going to board. It was the only way to do it, because they would never meet me anywhere. The younger brothers, who were taking care of the mom, ended up winning the case, and she was able to keep what was rightfully hers.